For a team that we made short work of last season, the Melbourne Heart have well and truly proven to be our jinx this season.  We were unable to beat them in three outings.  Let’s just hope we don’t meet them at any stage during Finals Football.

It started promisingly enough.  The Roar continued their solid form that saw them win four games on the trot.  A win here would really turn up the heat on the Central Coast Mariners who lead the top of the table by a slender three points but have only won just one game in the last six.

Mitch Nichols put us in the lead with a bullet from the edge of the penalty area just on halftime.  In the second half, the Heart came out firing though and after two impressive saves from point blank range by Michael Theoklitos, poor marking from the corner saw the Heart get a deserved equalizer.  It’s pretty rare for the Roar to throw away the result once they’ve taken the lead.  I think this might have been the first time it’s happened this season.

The sting in the tail came in the 90th minute.  Besart Berisha was brought down in the box and awarded the penalty.  Mohammed Adnan stepped up to deliver a Big Mo special but Heart keeper Clint Bolton was up to the task and parried it away.  It finished 1-1.  Later that weekend, the Central Coast Mariners scored a last minute equalizer against Sydney FC to maintain their 3 point lead at the top of the table.  An opportunity wasted.  Just three games to go.  It’s going down to the wire. 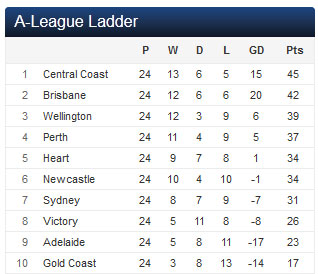