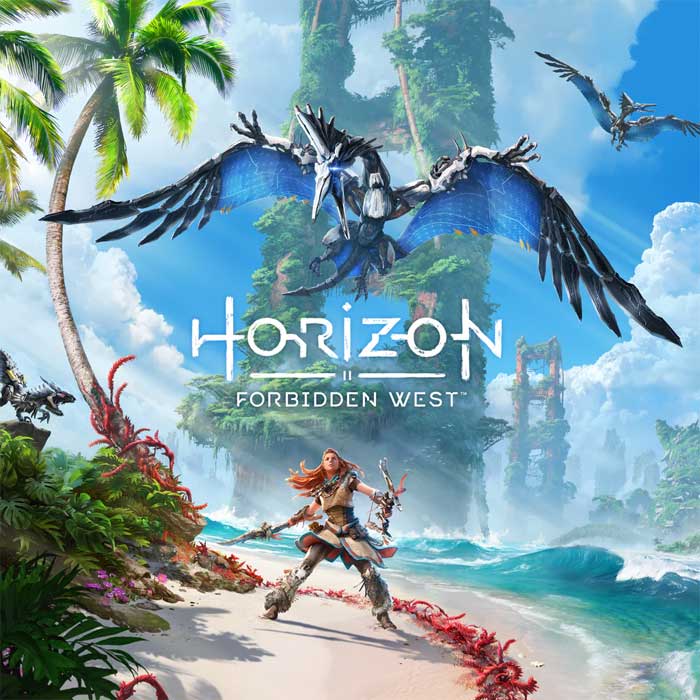 Horizon Forbidden West is a welcome arrival for Playstation 5 owners.  The first twelve months since the system’s launch have been hampered by the effects of covid on both the availability of the console itself and also the production pipeline of games that feel “next gen”.  For now, the availability of games that feel like they sufficiently represent a technological leap over PS4 games is slim to say the least.

Happily, Horizon Forbidden West is just the sort of game to make a new PS5 owner feel good about their new hardware.  Guerilla’s open-world fantasy adventure game feels like a “bigger is better” sort of sequel to Horizon Zero Dawn with a larger, more expansive world to explore than the PS4 original and an impressive list of expanded features including more weapons, more side quests, new enemy types and an expanded moveset for the heroine Aloy.

Forbidden West picks up a few months after the events of the first game.  A mysterious blight is spreading across the world, killing all life forms and threatening the existence of the surviving tribes.  Aloy seeks out a new form of GAIA to restore balance to the planet’s biosphere.

This quest takes Aloy westward where she encounters new tribes of humans, both friendly and hostile.  To complicate matters, Aloy appears to be betrayed by her former ally Sylens, who has stolen HADES, a powerful technology that if enacted, is capable of creating an extinction-level event.

On paper, there’s little I can find to fault Horizon Forbidden West.  I think the game smartly expands upon its foundations in a way that should satisfy most fans of the original.  The scope of the new features is impressive and graphically, the game is exactly the sort of showcase that is sought after to highlight the wonders of a brand-new, premium games console. 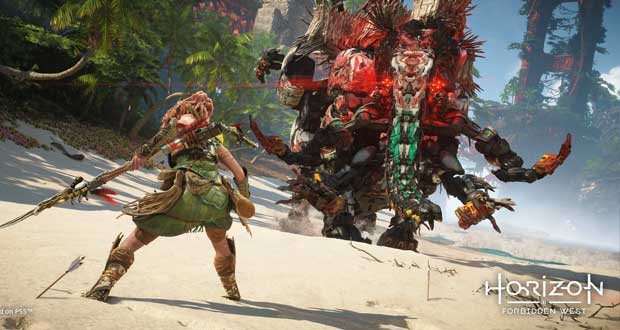 Unfortunately, I have a pretty major chip on my shoulder for Horizon Forbidden West.  Firstly, after roughly ten hours of play, I encountered one of my most severe bugs I have ever encountered in over thirty years of gaming.  The bug not only wiped my entire progress for this game, it rendered my PS5 unusable until it was restored to factory settings, effectively wiping all my save files I had carefully transferred across from my PS4 (I’m not a PS+ subscriber so they weren’t backed up in the cloud).  It’s hard not to begrudge a game for causing me to lose several hundred hours of gameplay and I’m more than a little miffed that my save files for games I completed including GTA V, Red Dead Redemption 2, all the PS4 Yakuza games and countless others, are all gone.

Starting over and playing through Forbidden West a second time, I also found myself casting a more critical eye over what I was playing.

Although technically polished, I often can’t help but feel bored by Forbidden West, which seems criminal for a game about exploring a post-apocalyptic world filled with giant robot dinosaurs.  I find Aloy as a character to be rather two-dimensional and uninteresting.  She is a warrior woman who saved the world once already and yet everyone she comes across in this game seems unwilling to help her unless she completes some sort of mundane chore for them.  And too frequently she feels like a doormat for these demands.  Compared to other prestige AAA productions from Sony, I find it hard to imagine Kratos or Joel agreeing to fetching a bunch of rabbit pelts (or some equally tedious fetch request) just so that a gatekeeper will agree to let them pass.

The heightened production quality that Horizon has also raised my expectations for the acting performances and cinematography and once again Forbidden West feels disappointingly flat.  Most of the NPCs that Aloy encounters feel like walking, talking exposition machines.  There also feels like a lack of pacing to the story.  The future of the planet is apparently at risk but Aloy always seems bogged down by endless side quests and distractions.  Even the main narrative feels plodding and padded out to fill a 25 to 30hr running time.  It made me yearn for Miles Morales and its lean, efficient story telling.

I think my opinion of Forbidden West is definitely coloured by that brutal bug I encountered but equally, I don’t think I’m entirely off-base with my opinions either.  The original game had the misfortune of releasing within a week of Breath of the Wild which ultimately cast a long shadow over Horizon.  It happened again with Forbidden West which had its lunch eaten entirely by From Software’s formidable Elden Ring, a title which occupied the gaming zeitgeist almost single handedly for many months after its release.  Forbidden West isn’t a bad game, far from it.  I do think its very safe though.  I wish it would’ve taken a few more chances and swung for the fences harder with its game design.  As it is, it feels very paint-by-numbers, no matter how pretty and technologically accomplished it may be.

When a deadly blight threatens the planet, Aloy travels to the Forbidden West to find answers.

Summary : A highly polished sequel that ticks the boxes but underneath the impressive veneer, Forbidden West can feel a little soulless and unambitious.