Being a relatively late adopter of Netflix, Unbreakable Kimmy Schmidt is actually the first show where I got to experience one of the perks of the video-on-demand service.  The show popped up on my What’s New feed, I watched the first couple of episodes, became hooked and binge watched the rest of the series and finished it by the end of the weekend.

What a charming and enjoyable show this is.  Saved from the scrap heap by Netflix after it was passed over by NBC, Unbreakable Kimmy Schmidt is a comedy created by a Tina Fey that has one of the most improbable and preposterous sounding premises for a comedy that I’ve heard of in some time.  Kimmy Schmidt is one of four women who are kept in an underground bunker by a religious lunatic who tricks them into believing the End of Days is upon them.  After fifteen years of enslavement, they are finally freed.  Kimmy decides to live in New York where her bubbly personality and sheltered existence (all her pop culture references are from the Nineties) put her at odds with everyone around her.

It sounds ridiculous but it works thanks to the peerless work of Ellie Kemper as Kimmy Schmidt in the lead role.  Kemper is earnest, bubbly and absolutely endearing as Kimmy.  Although she has limited understanding of the modern world, she is courageous and head strong in her approach.

Of course, Kimmy’s naive and happy go lucky nature needs other personalities to bounce off of and Unbreakable Kimmy Schmidt delivers hilarious and bizarre characters in spades.  The nucleus of the show is built around her perpetually broke flatmate Titus Andromedon and their eccentric landlady Lillian.  Both take a liking to Kimmy but seem happy to take advantage of her good nature when it suits them.  Kimmy eventually finds work as a nanny for the wealthy trophy wife Jacqueline Voorhees.  Jacqueline’s daughter Xan takes an immediate disliking to Kimmy and becomes a rival of sorts, determined to uncover Kimmy’s secrets.  Kimmy eventually develops a love interest of sorts with Dong, an Asian student at her school who is in the country illegally. 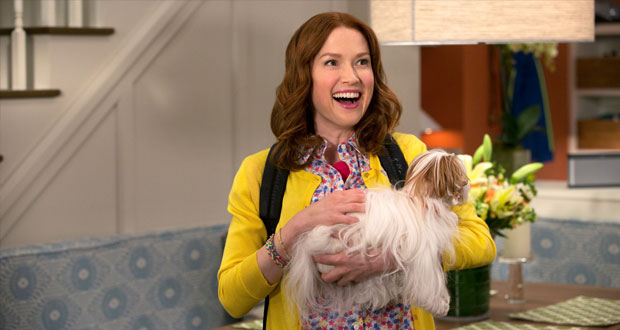 One of the things that makes Unbreakable Kimmy Schmidt feel so refreshing is that its eclectic cast veers wildly from the characters that typically populate tv comedy.  It’s easy to see why NBC would freak out over a show like this.  It has a female lead and a supporting cast includes an elderly woman, a gay black man, a wealthy trophy wife and an Asian love interest.

Of course none of this would mean diddly squat if the show wasn’t funny and the primary appeal of Unbreakable Kimmy Schmidt is its delightful and deranged gag-a-minute humour.  I’ve always been an admirer of Tina Fey but I’ve only ever seen limited quantities of her work.  I loved Mean Girls and I’ve seen the odd skit involving her (the famous Sarah Palin impersonations) but I’ve never seen 30 Rock or the majority of her work on Saturday Night Live.  As I’ve discovered with this show, her comedic sensibilities are kind of like a 21st Century Zucker Brothers (The Naked Gun, Airplane).  The jokes are delivered at breakneck pace and embrace absurdist and at times surreal levels of weirdness.  There are episodes that involve talking robots and wealthy socialites that travel in blimps.  The show has pop culture references but it chooses off-kilter ones – like a pastiche of Marcia Clark, the incompetent prosecutor in the OJ Simpson trial – who is played by Tina Fey herself wearing the world’s worst wig.

I loved this show.  Even some of the show’s lesser loved characters like Kimmy’s unfathomably stupid step-father Randy, worked a treat for me as he seems to clearly be channelling the spirit of Jim Varney (of Ernest Goes To Camp fame).  Better still, Randy’s appearances are usually accompanied by Kimmy’s half sister, the excellently named ‘Kymmi’.

Unbreakable Kimmy Schmidt is absolutely hilarious, highly quotable and crammed with creativity.  It has a fun, cheery sensibility where the humour is derived from absurdity rather than snarkiness.  It has dozens of gags that are call backs to earlier episodes and crams so many jokes into a single episode that they reward repeat viewing because you’re sure to have missed some the first time around.  It also has the greatest 15 second theme song of all time.  Unbreakable Kimmy Schmidt is a show destined to develop a cult following and I for one can’t wait for Season Two.

Previous: Wrestlemania XXXI Review
Next: Ori and the Blind Forest