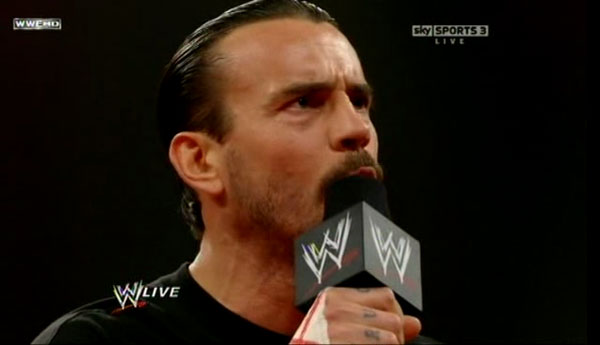 CM Punk - The 'CM' is rumoured to stand for Charles Montgomery, Chick Magnet or Cookie Monster

It’s been said that the wrestling business is ‘cyclical’ meaning that it undergoes peaks and troughs in popularity and relevance to popular culture.  When I was a kid, Hulk Hogan and Rock N’ Roll wrestling was a staple of Eighties pop culture.  It then underwent ten years in the wilderness before being revitalised again by Steve Austin and The Rock.  Even my dad who hates wrestling can recall the boom period when he was younger during the ‘Golden Years’ when Haystacks Calhoun was the big drawcard in the United Kingdom and wrestling briefly overtook the F.A Cup final in popularity and tv ratings (that didn’t last very long but it seems incredible that it could happen at all).

Today, Pro Wrestling is most definitely in a lull.  So much so that I’ve largely checked out of watching it when I once thought I’d be a lifelong fan.  It’s partly due to the lack of competition.  The WWE has been the only major player for ten years now and there isn’t any real external pressure to improve the creativity of the product.  For some reason, irrespective of the quality, there is always enough people around watching wrestling that it’ll remain a permanent fixture on television no matter how bad it gets.

Secondly, the astronomically high death toll in the industry and the infamous double-murder suicide by the quintessential pro wrestler Chris Benoit basically forced the WWE to make over their product and re-brand themselves.  Instead of installing a serious drug-testing policy and unionizing wrestlers so they have access to proper health care, they instead turned the product into an incredibly bland, sterile and corporate spectacle that is so self-conscious and ashamed of itself that the word ‘wrestling’ is banned from being mentioned on TV.  Similar to how Kentucky Fried Chicken legally became KFC to remove any references to ‘Kentucky’ and ‘fried’, words that were considered to have negative connotations with the public, World Wrestling Entertainment became WWE.  No wrestlers here, just ‘superstars.’  Almost every aspect of ‘wrestling’ was marginalized.  Managers were removed.  Belts were de-emphasized.  Any allusions to having a meaningful win/loss record or the fascade of being a competitive spectacle were gone.  Wrestlers made way for people who looked good on television.

This isn’t to say there aren’t talented wrestlers around anymore.  There certainly are.  It’s just that most of them aren’t in the WWE or if they are, their ability to perform in the ring isn’t emphasized in the slightest.  For long suffering fans of wrestling, this has probably been one of the least interesting eras in the history of the business.

Two weeks ago, CM Punk, a WWE wrestler who rose up the ranks from the independant wrestling scene ended a show by cutting a promo expressing his frustraution at the creative direction of the company.  It caught people’s attention.  He basically verbalized in a matter of minutes, on live TV, why the WWE was so awful.  His name and talking points became trending topics on Twitter.  For the first time that I can ever remember, the WWE was mentioned on ESPN and it wasn’t because someone had died or murdered someone.  Latenight talkshows came knocking on the door to interview CM Punk.

CM Punk’s promo and subsequent match at this weekend’s upcoming pay-per-view show Money In The Bank is considered to be an important milestone in the WWE.  Similar to Steve Austin’s groundbreaking “3:16” speech, it could potentially be the springboard for the company to turn its fortunes around and regain its diminished popularity.  Or it could be a final nail in the coffin for longtime fans hoping to see the WWE move away from its policy of marginalizing wrestling.

Wrestling is notorious for blending reality with fantasy.  Punk’s upcoming match with champion John Cena is billed as being his last due to the expiry of his contract which apparently is the case off-screen.  Whether the WWE chooses to re-sign Punk will give their audience a big indicator as to the long-term creative direction of their product. 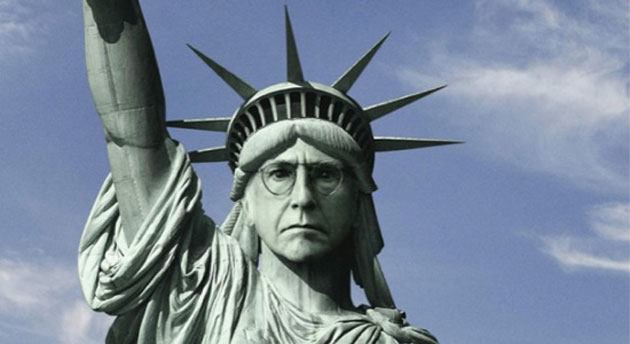 I know for many guys that a large part of the appeal of the show Entourage is that the program and its characters are the embodiment of how they would like to see themselves in an ideal life.  Being a movie star, having wild parties, hooking up with hot chicks and living it up.  For me, I have that exact same sensation when watching Larry David on Curb Your Enthusiasm where he plays an exaggerated form of himself – a middle aged man who spends time bickering with his friends, obsessively picking apart social etiquette and speaking his mind.  I am way too wishy washy and self conscious to ever be as brazen as Larry is.  And thats what makes him so interesting to watch.

The Seinfeld writer has turned a once-off pet project into an eight season long series now and its just as good today as when it started.  As a general rule of thumb in television, when a series ‘goes New York’, it usually means they’ve run out of ideas and the season will turn to shit.  That’s what happened in Season 7 of 24, all of CSI: New York and when Kim & Kourtney Kardashian Took New York.  With Curb Your Enthusiasm, this rule does not apply.

The key to the show’s success is its ability to constantly re-invent itself and stay fresh.  The show is now radically different from when it started.  There have been a plethora of wonderful side characters introduced into the show – Leon Black and Marty Funkhauser being the stand outs – and the show isn’t afraid to drastically change the core dynamic, as is the case in Season 7 & 8 where Larry seperates from his wife Cheryl who was a significant part of the earlier seasons.  The production values have also improved and the show looks more polished in the later seasons but it retains the unique feel of being a semi-improvised show.  Curb Your Enthusiasm incorporates both season-length story arcs as well as self contained single episode narratives, throwbacks and references to gags in earlier seasons as well as foreshadowing of things to come in later episodes.  The writing on this show is sharp, acerbic and occasionally, unexpectedly heartwarming.

It’s no exaggeration to say that Curb Your Enthusiasm is one of the greatest television comedies ever produced. I look forward to seeing what Season 8 has in store.