TV Show Round Up: Wrestlemania XXVIII 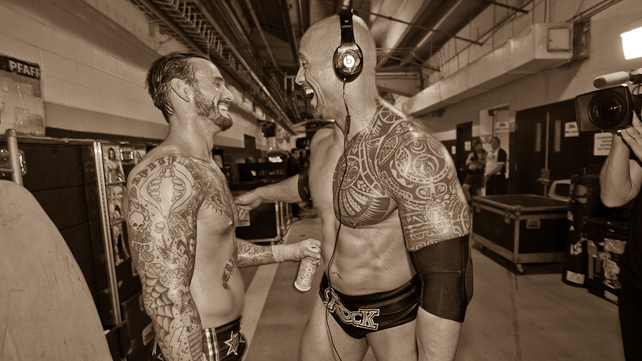 There are times when a great wrestling match can be tempered somewhat by a lousy crowd that’s too quiet or disinterested.  Equally there are times when a terrible match is made entertaining by a boisterous crowd who come up with amusing chants or make their own entertainment.  Wrestlemania XXVIII was an unusual pay per view in that it had instances of both.  It was a show with both soaring highs and terrible lows.

It started off with an absolutely horrific first hour which is best forgotten but may well have longer term ramifications for the company.  With everyone in good spirits and wanting to enjoy themselves, the WWE mysteriously chose to open the show with the World Heavyweight title match and had the Royal Rumble winner and challenger Sheamus defeat Daniel Bryan in eighteen seconds.

It was an extraordinary and head-scratching move from the company that, in a single kick, derailed the start of Sheamus’ title reign and devalued Daniel Bryan, the Royal Rumble and the World Heavyweight title.  It sounds like an obvious thing to say but every successful promotion needs to have titles and competitions that have some measure of importance and value to them.  WCW’s death knell came when their heavyweight title was won by D-grade actor David Arquette.  For the longest time, the WWE was great at sustaining this sense of prestige.  Until the late Nineties, their four major belts (Heavyweight, Intercontinental, Tag Team) all were held by major performers, many who would become household names that transcend wrestling itself.  Since 1993, the Royal Rumble has been a competition to determine the main eventer for Wrestlemania.

In 2012, Sheamus won the Royal Rumble, which in of itself, isn’t necessarily a bad decision.  The decision only starts to fall down when it gets reported that Chris Jericho was intended to win until a last minute decision to switch to Sheamus was made to ‘swerve the internet fans.’  They had no real plan for Sheamus and it showed.  Wrestlemania stories for Royal Rumble winners have historically been told in a grand fashion.  Shawn Michael’s boyhood dream, Randy Savage’s blood feud with Ric Flair, Steve Austin defeating his corporate boss in the culmination of a year long feud.  These are all Wrestlemania moments that are easily remembered by even a casual wrestling fan.

It’s less than a week after Wrestlemania and I can’t remember Sheamus’ story leading into Wrestlemania.  I’m pretty sure he didn’t have one.  He just smiled and thumped his chest a lot.  And his rewards for winning the Royal Rumble was to curtain jerk Wrestlemania in a match that got less time than a backstage commercial for Discovery Channel’s Deadliest Catch, a celebrity match featuring a reporter from The Today Show and a truly godawful rap performance from some guy called Machine Gun Kelly.

The interesting thing is that the intention behind the booking was to put over Sheamus as an unstoppable babyface who destroyed his opponent in record time.  Instead the crowd began to chant ‘bullshit’ which audibly came across in the next backstage segment immediately after the match.  During the next match, Randy Orton versus Kane, there were continous chants for Daniel Bryan.  Randy Orton is supposed to be the #2 face of the company and the crowd was more interested in chanting the name of the heel who just lost the opening match.  Chants for Bryan and his trademark catchphrase ‘YES!’ continued throughout the show.  The WWE likes to have a pop-up on their show whenever a WWE-related topic trends on Twitter.  They had to stop for almost an hour during Wrestlemania because the number one trend was ‘MORE DANIEL BRYAN.’  Both the live audience and the internet audience was giving direct feedback to Vince McMahon that he screwed up.

Orton and Kane competed in a bland, forgettable encounter which Kane surprisingly won…for no reason that I could tell other than it was the opposite of what people expected.  No one cared.

This was followed up by an equally forgettable match where The Big Show beat Cody Rhodes to ‘finally get his Wrestlemania moment.’  This comes back to what I was saying earlier about no one caring about the Intercontinental belt.  It certainly didn’t feel special despite the commentator’s best efforts to sell it as such.  The crowd certainly didn’t care either.

Maria Menounous and Kelly Kelly beat Beth Phoenix and Eve in a match that ended with a roll up pin, the way every single women’s match has ended in the last five years.  The most notable moment of the match was Menounous delivering a stinkface to Eve and getting her makeup on the posterior of her white pants.  This lead to the crowd chanting ‘skidmark.’  It must have been audible to Menounous as she later tweeted to clarify that she didn’t actually shit her pants.  Really.

It was an incredibly deflating and dreadful first hour.

Things picked up dramatically with the Triple H vs Undertaker match.  It was their third such encounter and as everyone guessed, they threw the proverbial kitchen sink at each other with roughly five million chairshots, fifty pedigrees, five chokeslams and a tombstone piledriver.  There was some pretty hammy acting from Shawn Michaels as ref who teased ending the match a couple of times but to be honest it was pretty fucking great.  The match really drove home how old these dudes are now though and that they are both pretty much in semi-retirement.  I’m actually surprised Taker is still going.  One more Mania maybe?  The Undertaker’s winning streak at Wrestlemania is one of the few things that the WWE has managed to not screw up and have the diligence to build up effectively over the years.  It’s what makes those moments so awesome when Michaels superkicks Taker straight into Triple H’s pedigree and you think for one split second that he might finally lose after a TWO DECADE LONG STREAK.  Now that’s some effective long term booking.

CM Punk and Chris Jericho had to work pretty damn hard to re-engage a crowd that was still clearly burnt out on cheering the Hell In A Cell match.  And as you’d expect, they had the skill to do it.  This is exactly the type of match I wanted out of these guys.  They got twenty minutes, there was plenty of back and forth and the match ended in a crazy flourish of holds and counterholds.  This was the match I hoped Daniel Bryan could put on also.

Next, Vince decided to add one of those skits that make you super embarassed to be a wrestling fan.  He inexplicably had Brodus Clay and a bunch of racially caricatured black women with gigantic prosthetic asses do a dance for five minutes.  Goddamit, Vince.

Lastly, The Rock defeated John Cena clean in a match that was pretty decent but made all the more enjoyable by a thoroughly partisan crowd that loved The Rock.  Interestingly enough, the following night on RAW, they brought closure to the feud.  It appears that at least on this front, the WWE have conceded defeat and accepted that they will never get John Cena to be as popular as The Rock and aren’t going to try and put him over in a series of matches.

The RAW following Wrestlemania was notable for two things.  Firstly, Daniel Bryan is the most over performer with the crowd.  They constantly chanted his name and ‘YES!’ throughout the night.  So much so that it interrupted seperate promos for The Rock and John Cena who both had to acknowledge the chants.  Naturally, Bryan himself was given about ten seconds of airtime and no actual mic time.  Conversely, Sheamus was booed mercilessly by the crowd in his first appearance as champion.  So lacklustre was his support that his first challenger as heel, Alberto Del Rio, appears to be a defacto face because fans are pissed about the fashion in which Sheamus beat Daniel Bryan.  It’s can’t be understated just how badly the WWE booking borked Sheamus’ first run as a babyface champion.

Secondly…Brock Fucking Lesnar returned to the WWE for the first time in eight years to F5 John Cena at the end of RAW.  It appears Cena has been so dominant of the current roster that the only thing left for him to do is to job to a bunch of returning WWE legends in special exhibition matches.  I’m okay with that. 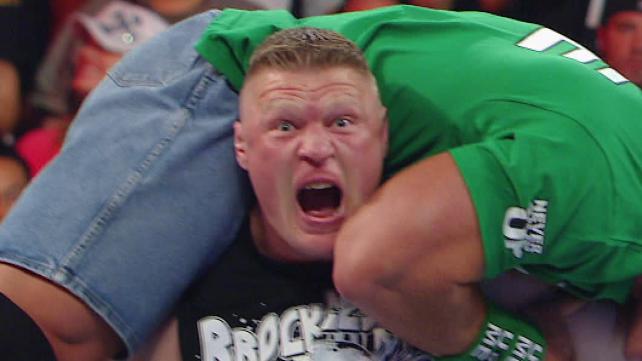 In summary, a Wrestlemania of mixed quality.  But an intriguing follow up on RAW means I’ll stayed tuned.