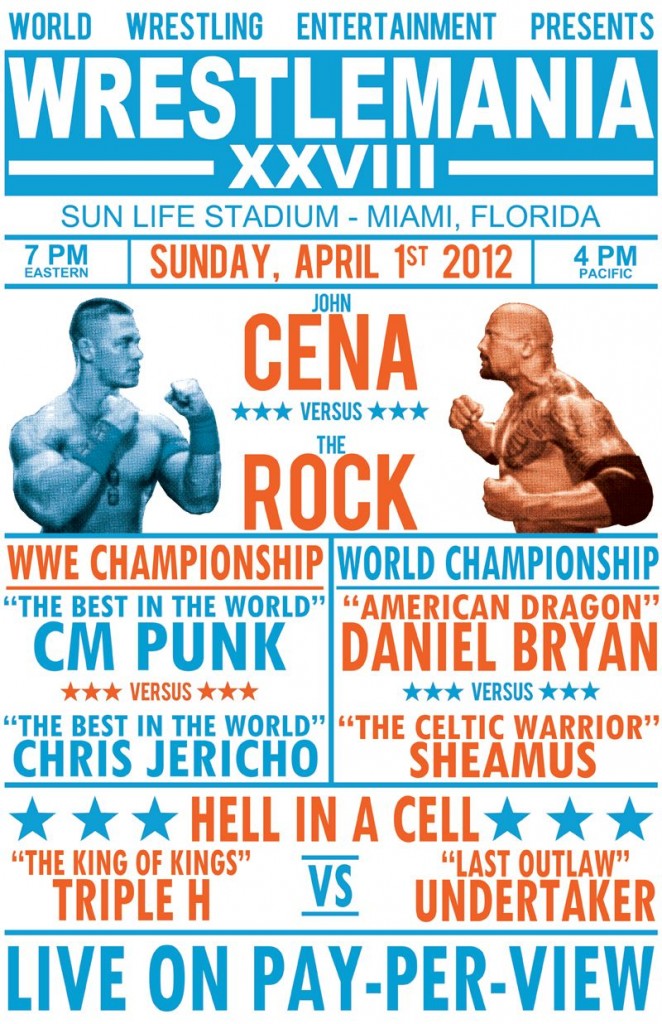 Wrestlemania, the WWE’s flagship show, is airing this Monday morning in Australia.  The show is eminating from Miami, Florida (The Rock’s hometown) at a sold out open air show at Sunlight Stadium.  It is headlined by the marquee match John Cena vs The Rock, which has been over a year in the making.

Why Will Wrestlemania XXVIII Be Awesome?

For last year’s Wrestlemania predictions blog, I wrote a pretty dour prologue, remarking on how stale the company was, with the same old faces (Cena, Orton, Triple H) headlining the company for close to a decade.  The biggest reason to be excited for last year’s Wrestlemania was the potential for them to do something different.  In the end, they didn’t deliver.  Wrestlemania XXVII was pretty unremarkable.  There was a couple of decent matches but nothing to match the calibre of years past.

To WWE’s credit, in the twelve months since then, they have finally (FINALLY!) gotten behind some new wrestlers and given the company some much needed fresh air.  Heading into the show as champions are CM Punk and “American Dragon” Daniel Bryan, two very talented wrestlers who have worked the indy circuit for years and have finally been given a chance to shine in the largest wrestling company in the world.  Both have had championship reigns lasting several months, Punk as a face and Bryan as a heel.  They both excel in the ring, have outstanding mic skills and offering something completely different from the previous crop of headlining wrestlers.

Punk is a straight edge, drug and alcohol free native of Chicago.  His unconventional appearance (he is not a gigantic muscle-bound freak) and personality make him the anti-thesis of John Cena, the headlining babyface of the company since 2005.  Cena’s white guy rapper gimmick and clean cut kiddie-pandering promos have made him the bane of many wrestling fans.  The rise of a performer like CM Punk after Cena’s lengthy spell at the top reminds me of the transition from Hogan to Bret Hart in the early Nineties.

Punk has actually had three previous World title runs but they have been shorter and his positioning in the company made it clear he was not genuinely considered a main event performer during that run.  It was only after his infamous promo on RAW did he finally cement his spot.  For Daniel Bryan, his unexpected World Title win at TLC 2011 over The Big Show was to mark his first ever title reign as champion.  Against all expectations, he has held onto the belt for five months and is really hitting his stride as an arrogant vegan showboater who is a jerk to his valet/lover AJ who is still somewhat of a babyface in the fan’s eyes.  The dynamic of a heel champion who treats his babyface valet like dirt reminds of classic Macho Man Randy Savage and Miss Elizabeth from the late Eighties.

Whatever the outcome of their respective matches, its great to see CM Punk and Daniel Bryan enter Wrestlemania as champions.  A year ago, one of them wrestled in an untelevised curtain jerker and the other guy was in a feud against Randy Orton where he lost every single match.  A big part of why Wrestlemania XXVIII will be awesome is because it is being built around these two excellent performers as the World Champions. 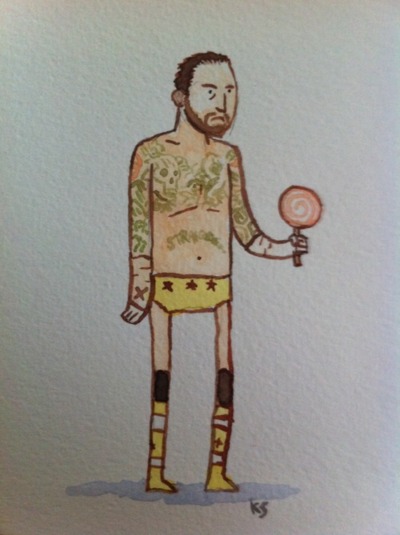 The other reason this show will be awesome is because wrestling events at gigantic outdoor venues are pretty rare and always look rad.

How do I prepare for Wrestlemania?

Wrestlemania usually runs about 3-4 hours long so if you’re watching at home, its best you make some snacks for the occasion.  Here’s a wrestling-themed potluck dinner menu shamelessly stolen from Something Awful:

You Can’t Sashimi
a selection of RAW fish

How about some predictions?

Randy Orton vs Kane
“Battle of the Tards”

One of the strange things that happened when they turned Randy Orton face a couple of years ago was that they tried to play up his persona as that of someone who is mentally on edge.  His theme song opens with the line “I hear voices in my head…” and he has mannerisms in the ring where he enters a trance-like state of concentration before applying his finishing move.  I think this is supposed to be evocative of Stone Cold Steve Austin’s Don’t Trust Anyone personality.  Unfortunately, I think what we’ve ended up with is a character who seems unstable in a ‘I’m off my meds’ sort of way.

Anyway, this is one of those matches where they are pairing up dance partners who have nothing better to do.  Kane and Orton are both nutjobs who why not put them into a match together?  The outcome doesn’t really matter because this match isn’t important in the slightest.

This match should give us a pretty good idea of where the WWE is at.  Cody Rhodes is someone who has slowly been getting over with audiences during his lengthy reign as the IC champ.  He’s probably reached a point where he outlived the usefulness of the title.  So what should happen here is that he should lose the title to Big Show, but do so in a way that elevates him and prepares him for the main event in the months after Wrestlemania.  Let’s see if they get it right.

Teddy Long has been the General Manager of Smackdown for about eight years.  During that time he periodically comes out and says ‘HOL ON A MINUTE DER PLAYA.  WE GONNA MAKE DIS A TAG TEAM MATCH.’  In the past, he used to always come out and announce ‘TONIGHT YOU WILL BE FIGHTING A MYSTERY OPPONENT.  THAT MAN…IS KANE!’

On the other hand, John Laurinitis, Executive Vice President of Talent Relations and RAW Interrim General Manager, is totally awesome.  He looks and sounds exactly like Bob Einstein, the guy who plays Marty Funkhouser in Curb Your Enthusiasm and is the surrogate in Arrested Development.  He is droll, ridiculously straight-laced and hugely entertaining with his dry sense of humour.  He brings a subtlety to wrestling that is very rarely seen.

If we’re lucky, his team should win this thing.

The Undertaker vs Triple H, featuring Special Guest Referee Shawn Michaels
Hell In A Cell, Undertaker aiming for a WM record of 20-0

This match should be entertaining as there is no reason why they shouldn’t overbook this thing to hell and back.  It’s a big milestone for Taker to reach (two goddamn decades!) and he is facing Triple H for a third time as his Wrestlemania opponent.  I think its wise that they’ve acknowledged that at this stage, Taker is highly unlikely to be beaten in a conventional match.  It’ll need Shawn Michaels cheating like hell, the spectacle of a cage to cover for the fact that these two talented performers are now old as fuck and it will look damn awesome to see a Hell In A Cell match at Wrestlemania (a first since WM15 I believe).  Expect chair shots, run-ins, the ring exploding, two heel turns and a totally tainted victory for whoever wins.

Prediction:  The Undertaker….BUT, it would be awesome for Triple H to win just for the fallout and how they would book it.

A sign of how much the company has changed is this match right here.  These two men actually met last year at Wrestlemania XXVII but were not considered important enough so they wrestled in the untelevised pre-show portion so that Snooki from Jersey Shore could wrestle on the actual pay per view.  12 months later, they meet again in one of the headlining matches.

I really, really, really want Daniel Bryan to retain here.  He has been absolute gold as the champion and I feel like he’s only just getting started with where he could take his character.  But, a lot of the reason why he is so successful is getting heel heat from the audience is because he is the champion.  I don’t really have anything against Sheamus.  He’s a decent wrestler and its kinda neat seeing the company get so whole-heartedly behind a random ginger Irish dude.  All signs point to Sheamus getting the title here but it must be noted that the last four Royal Rumble winners haven’t been successful in capturing the title at Wrestlemania.  I desperately hope Bryan makes it five.

I don’t really care who wins this, I just want them to get twenty minutes so they can put on the best possible match.  The build up for the match has been really all over the place.  Originally Jericho returned to the WWE as a mute troll, purposefully wasting the audience’s time with silence.  Then he proclaimed at the Royal Rumble it would be the ‘end of the world as we know it.’  He proceded to do nothing significant at the event (?).  Then he started a feud with CM Punk over who was the best wrestler in the world but then that got ditched for a more personal storyline with Jericho publically calling out CM Punk’s father as an alcoholic and his sister as a drug addict.  At the end of the day, who cares?  I just want a good match and for Punk to get his Wrestlemania moment with the title.

John Cena vs The Rock

The best part of this match should be the crazy crowd reaction that both men should elicit from the audience.  There should be some pretty vociferous booing of John Cena and I’m not entirely convinced The Rock won’t be spared some too.  Either way, both men can still go and they should be amped to perform in front of a molten hot crowd.  Whereas the Triple H and Undertaker match should have all manner of hijinx, I expect this to end clean with a ‘respect’ handshake at the end.  Sorta like The Rock vs Hulk Hogan from Wrestlemania XVIII.

Previous: The Hunger Games
Next: TV Show Round Up: Wrestlemania XXVIII