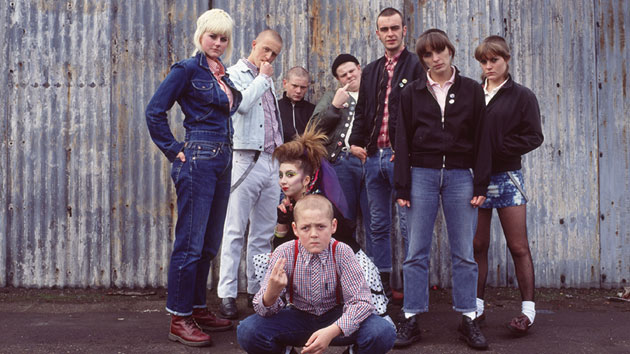 There’s something that creeps me out about child actors.  Especially good ones.  Who knows why Thomas Turgoose, the star of This Is England, who was 13 when the film was shot, is so good at portraying a skinhead character from 10 years before he was born.  Can a child really switch on a believable level of acting when portraying an aggressive racist youth and then go back to being a normal kid when the camera stops rolling?  If, on the off chance, he isn’t really acting, is it such a good idea to give him fame and fortune?  So convincing is Turgood in This Is England that those thoughts crossed my mind.

According to his Wikipedia entry, Turgood demanded to be paid 5 pounds when he showed up for his audition so perhaps he is not far removed from his character Shaun.

Turgoose is one of those actors who I think will be guarenteed plenty of roles in his career not just because of his talent but because he has an interesting demeanour and appearance.  He looks like he should have a babyface but he has a slackjaw and lazy eye which suggests an exhaustive and colourful background.  He looks like the grown up version of that famous tabloid photo of a baby giving the finger at an English football match.

I have only seen one other Shane Meadows film, Dead Man’s Shoes, and they share a common thread in that the plot is relatively simple but there is depth to the characters and exploration of the themes.

Turgoose plays Shaun, a young boy who’s father died in the Falkland War.  He is picked on at school and has no friends.  He is disengaged from his lonely mother.  Then, his fortunes change when he is befriended by Woody, a friendly skinhead, and his likeminded gang.

The film was something of an education for me as I had made the assumption that skinhead culture was always tied to extreme nationalism.  In fact, late in the film, it is revealed during a discussion between two characters that part of the irony of skinhead culture is that it was originally based on elements of black culture, such as ska and reggae music and that only later was a large part of the subculture injected with elements of nationalism and racism.

The story takes a turn when Woody’s friend Combo is released from prison.  Combo is more like the classically recognised skinhead.  He comes from a poor background, its hinted that he has a miserable upbringing and he takes out his aggression on black immigrants.  Woody had become something of a paternal figure for Shaun up to that point but Combo hijacks his role when he goads Shaun into believing that a nationalist movement was something his late father would have wanted him to be a part of.

The themes of immigration and nationalism are still very relevant hot topic issues in Britain and with This Is England, Shane Meadows has made an excellent exploration of those themes through the visual lens of Eighties Skinhead culture.

The film however does not beat you over the head with its stronger themes and takes the time to show other elements of Shaun’s adolescence including an incredibly strange relationship with Smell, his first girlfriend who is about six years his senior.  I think part of the strength of the film does come from showing the mundane aspects of the characters lives.  By showing the gang celebrating birthday parties and playing board games, it fleshes them out as real people rather than a one dimensional film portrayals of racists.

I look forward to seeing Turgoose in future films.  This pint-sized younger version of Vinnie Jones will hopefully have a great career ahead of him.  The same goes for Meadows.  It’s not really a stretch to say he is one of the best film makers from the UK at the moment and I look forward to his next work.

Tagged with: This Is England