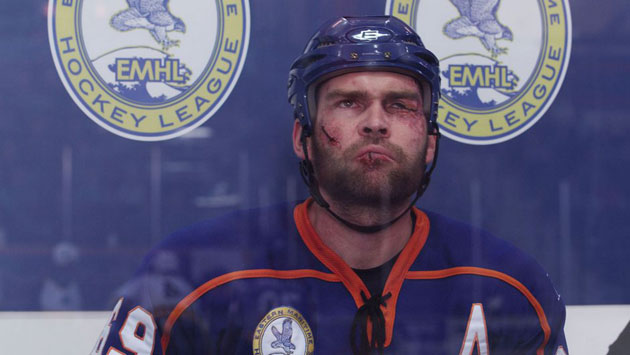 I like Seann William Scott.  I know where I stand with the guy.  He’s played more or less the same character since American Pie – that oafish jock with the shit-eating grin – and it’s resulted in a catalogue of surprisingly decent comedies including Role Models, Welcome to the Jungle and now Goon.

Based loosely on a true story, Scott plays the role of Doug “The Thug” Blatt, a cheerful simpleton who toils through life as a bouncer until his life changes dramatically when he attends a local hockey game at the behest of his friend Pat.  During the game, Pat successful goads a player from the visiting team to leave the rink and fight him in the stands.  Doug gets involved in the altercation and flattens the player.  His iron fist and talent for absorbing blows to the head immediately capture the attention of the coaching staff and before long, Doug is recruited to play on the team.  He can learn to skate later.

I don’t know much about ice hockey at all but if this film is to be believed, players can bodycheck one another and engage in bloody brawls that only result in temporary minute-long sin-bins.  Blatt is recruited to play for the Highlanders, a Minor League Hockey team that has an all star player in their squad Xavier LaFlamme who is skillful on the ice but has a glass jaw and never achieved his full potential after he was on the receiving end of a physical demolition job at the hands of legendary tough man Ross Rhea.

Doug is hired to protect LaFlamme on the ice and as his fame for beating the snot out of other players spreads, his team seems destined to meet Rhea’s in the playoffs in a showdown between the two toughest players in the league.

Looking back on those last two sentences, I might be making this film sound more complicated than it is.  Its more or less a montage of Doug being super nice to people on and off the ice and then repeatedly punching his opponents in the face until they draw blood.  Even though the violence is at times brutal, the juxtaposition with Blatt’s incredible politeness made it enourmously entertaining to watch.

The unexpected twist to Goon is that it has a surprisingly bittersweet heart behind the violence.  The team that Doug plays with is full of also-rans, ne’er-do-wells and divorced old timers.

In his personal life, Blatt has a gay brother who he is accepting of but his parents are spiteful and disapproving.  They ignore Blatt’s brother’s sexuality and they openly disapprove of Blatt’s fledgling new career.  This family dysfunction is not resolved by the end of the film.

Blatt also tugs on the heartstrings when he attempts to form a relationship with Eva, an ice hockey groupie he meets at a bar.  Eva is attracted to Doug but does not have high esteem. ‘I have a boyfriend already and I’m a huge slut’ she explains.

There are a lot of sad lonely souls in this movie but it still warms the heart to see Doug Blatt remain consistently cheerful in the face of all this relentless negativity.  Goon reaches a dramatic, chaotic and poetic conclusion when he finally throws down the gloves and fights Ross Rhea.  Two gladiators on ice in a fight for the ages.

Goon is a strange movie.  But its very funny and far, far better than I expected it to be.

A Song Of Fire and Ice

Summary : Surely the greatest film about ice hockey made. It is full of laughs and has plenty of heart.