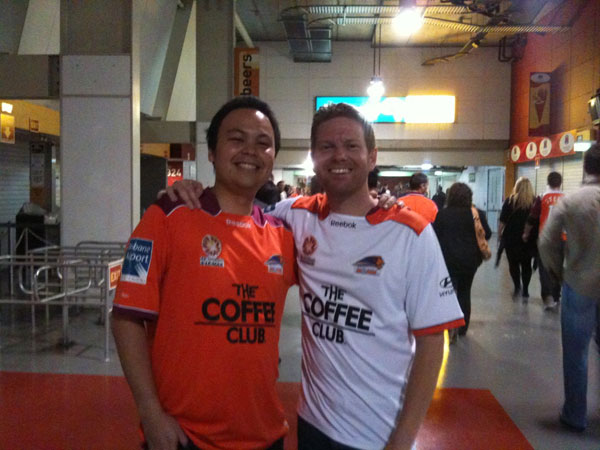 They must be putting something in the water in Brisbane.  Somehow, completely against the run of form, both our local rugby and football teams have transformed from being basement dwelling also-rans into genuine title contenders.

Earlier in the year, the Queensland Reds managed to turn around almost half a decade of mediocrity into a fifth place finish in the Super 14, defeating the top three of the teams in the competition as well as translating this newfound success into national representation.  The current Wallabie squad includes twelve Reds players.

If that wasn’t awesome enough, we are now at the halfway stage in the 2010/11 season of the A-League and the Brisbane Roar are looking like the real deal.  They sit second on the table behind Adelaide United and are looking dominant in every game.  I was prompted to blog about this after witnessing their latest game where they dismantled last year’s finalists Melbourne Victory 2-1.  We were the better side and we made the most of our chances.  A goal midway through the second half from Costa Rican import Solazarno sealed the game for us.  We’re only 3 points behind Adelaide and now well clear of the rest of the pack.

It wasn’t always like this.  Last season we had a pretty average start to the season.  We played conservative and unambitious football.  More often than not, it felt like we were happy if we came away with a draw.  If we got a goal, it was more of a fluke than anything.  Then we’d sit on it, hoping it would be enough.

Things took a turn for the worse when former coach Frank Farina had a bit of problem with drinky drinky before getting in his car and driving to training.  We then got a new coach in Ange Postecoglou whose first act was to clear out over half of the starting eleven in a matter of weeks.  Although it meant a right-off for the remainder of the season, the new blood Postecoglou has brought in has dramatically revived the fortunes of the club.  The new talent play quick, confident and attacking football.  We play to win.  The quality of the midfield in particular has meant the Roar have enjoyed the lion’s share of possession and territory in almost all their games.

Even crusty old veterans who survived the cut last season are lifting their game.  I’ve been going to Roar games for about three years now and I’d be hard pressed to pick a lazier player than Reinaldo.  He reminds me a lot of the former Southampton striker Matt Le Tissier.  He is capable of scoring some sensational goals but is incredibly tempermental and the level of effort he applies seems directly proportional to whether the team is winning or not.  This season, he broke a 10 month goal drought and has since gone on to score 3 more and he’s even helped out with a couple of assists.  It’s a remarkable turn around.

It’s looking good for the rest of the season.  We’re not overly reliant on one or two players like those jerks at Adelaide United who stole Sergio ‘Squidward’ Van Dyk from us last season and the team seem to get better with every outing.  The team has even gone viral on the Internet with a unique kayak celebration from last week’s game against the Mariners garnering over 100,000 hits on Youtube.

We just need Adelaide to slip up and lose their first game of the season and I predict we will surpass them and run away with the league title.  Regardless, it’s good to see the local boys doing well.  It’s way more engaging supporting a team that you actually get to see in person on a regular basis than one you only see on TV. 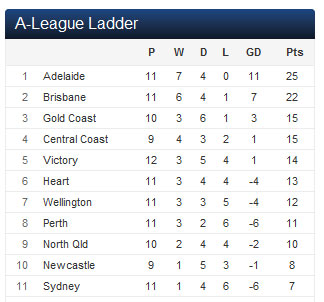