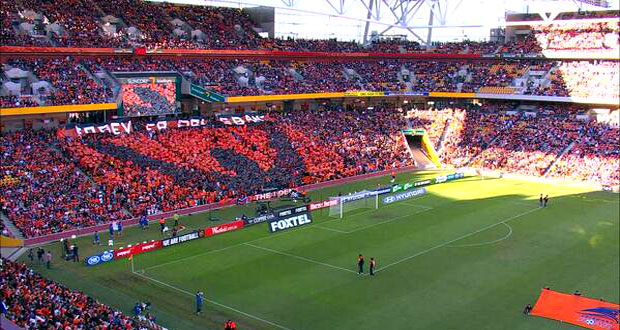 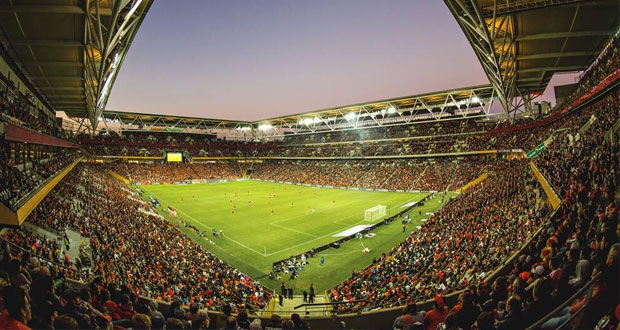 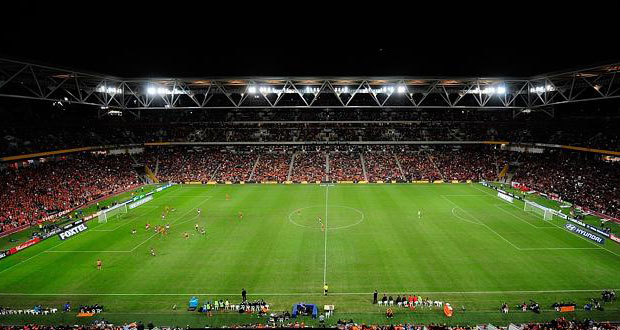 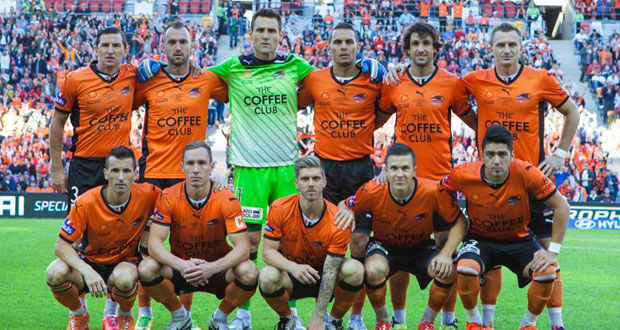 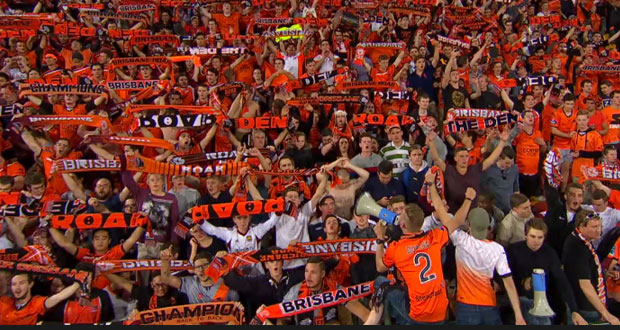 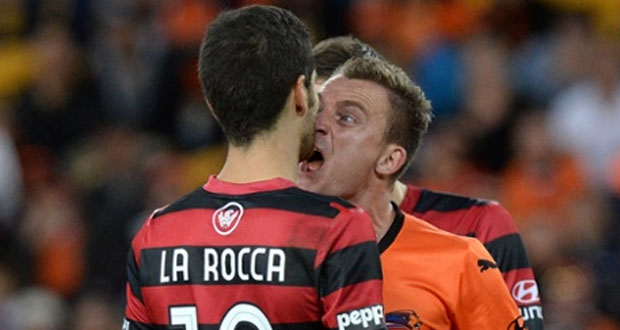 We will miss Berisha’s unique and colourful communication style 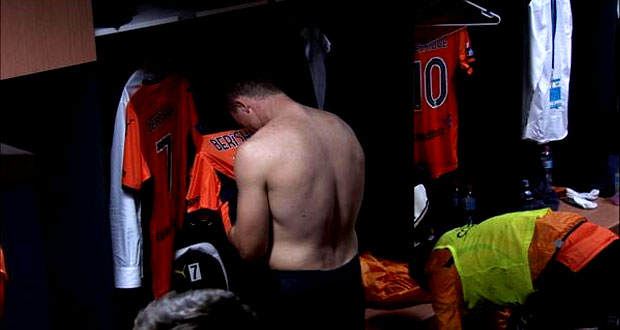 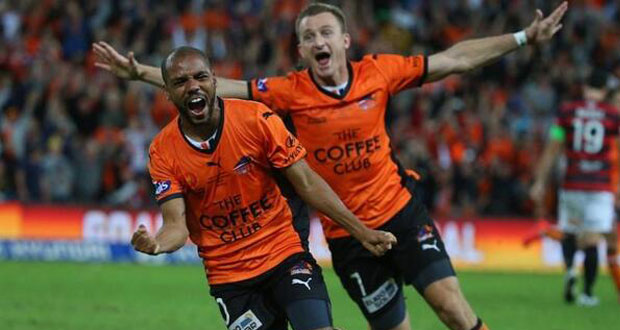 A jubilant Henrique reacts after scoring the winning goal 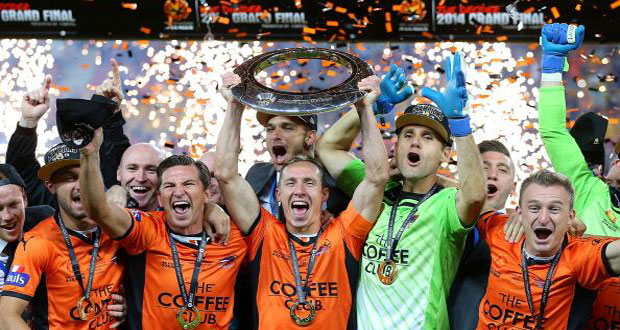 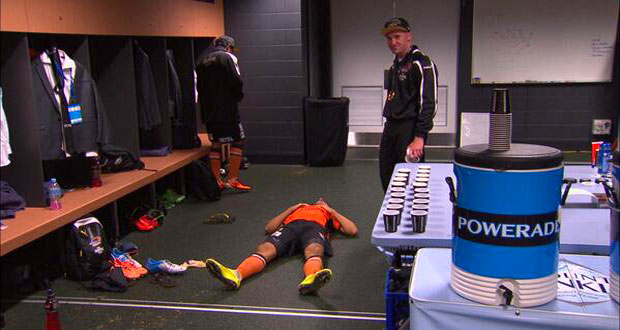 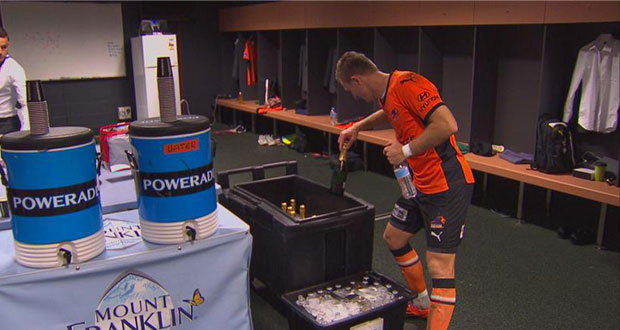 To the winner goes the spoils

BRISBANE ROAR ARE THE 2013/14 A-LEAGUE CHAMPIONS

There’s a multitude of reasons but football in Australia is finally starting to gain some serious traction in the country’s sporting psyche.  Politicians were making sure they were getting photographed in the team’s colours during the week.  The Grand Final in 2011 didn’t even make the back page of the papers but this week it was splashed across the covers before the game took place.  TV Ratings are up.  Attendances are up.  And people who I thought had no idea football even existed in Australia were buying tickets for the Grand Final.  The stage was set for something special. 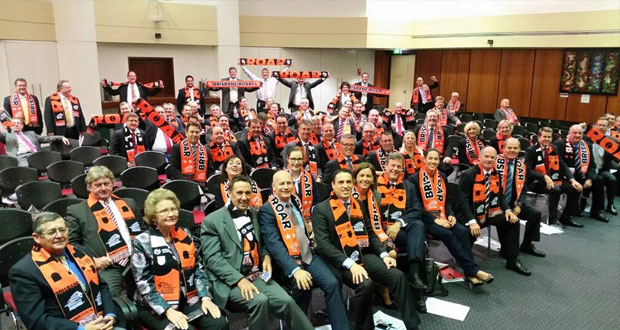 For any first timer coming to experience an A-League game, they would be in for a treat.  Brisbane Roar played host to Western Sydney Wanderers, the newest club in the competition who have only been established for two seasons but were appearing in their second Grand Final already.  They brought with them the Red and Black Brigade (the RBB), the loudest and most intimidating active supporter group not just in the competition, but in just about any sporting code in Australia.  Two years ago, I said Perth Glory brought a ‘sizable’ supporter group when they had 2,000 fans at Suncorp.  The RBB numbered closer to 10,000.

Since the team’s inception, I have always wanted to travel to Pirtek stadium to experience the Wanderers crowd atmosphere live.  They fill out a 20,000 seat stadium every home game and sound absolutely intense.  At the Grand Final, they definitely drowned out our own supporter base The Den and were a sight to behold.  What the supporter base lack in numbers, they make up for in passion and volume.  They sang for their heroes for the full ninety minutes.

The contest was between the two best teams in the competition and after a tight first half where neither side gave an inch, the game came to life in the second half and lived up to its billing.  The Wanderers controlled the midfield and asserted themselves through Iacapo La Rocca and Mateo Poljak.  Meanwhile their notoriously stingy defense gave Brisbane very few sniffs.  Matthew Spiranovic and Nikolai Topor-Stanley had the Brisbane attack on lock down.

The Wanderers broke the deadlock in the 55th minute when Thomas Broich misjudged the flight of a corner kick which soared over his head.  Spiranovic got onto the end of it and fired it into the back of the net to send the RBB into raptures.  The Dream Double for the Roar suddenly looked a long way away.

If the Roar struggled to find their fluency, they were helped enourmously by the injury of Topor-Stanley on the hour mark.  He was a rock in defense and his absence meant that La Rocca had to drop back which suddenly turned the tide of the match in favour of the Roar.

Mulvey also wasn’t about to die wondering and he made an immediate attacking substitution, bringing on Henrique and Lustica not long after.  The Roar began to open up some chances at goal, the best falling to Berisha who found space in the penalty area, only to have his shot charged down at the last moment by Spiranovic.

Time wasn’t on the Roar’s side.  As the minutes ebbed away, I realised this would be it.  It wasn’t to be their day.  We had a good run, a fantastic season and some amazing escapes in the finals but it just wasn’t going to happen.  Not three years in a row.

I should have known better. 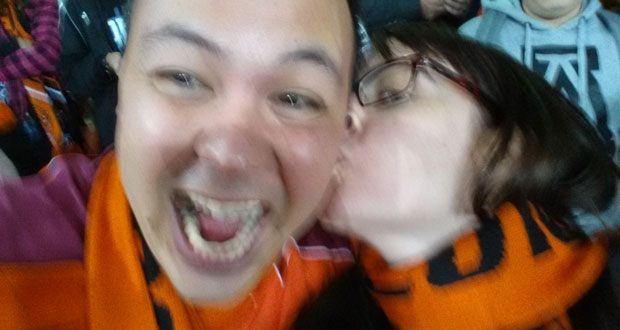 I was pretty happy when Berisha scored

In the 88th minute, Thomas Broich took a free kick and fired in a lofted pass down the Caxton Street End.  Berisha rose above the Wanderers defense and with only minutes left of his playing career at Brisbane, he headed home the equalizing goal that sent 40,000 fans into wild cheers.  Just like in 2011 and 2012, I jumped and yelled and hugged the people around me shouting “I don’t believe it!”.

The game went into extra time and Wanderer’s substitue Labinot Haliti had a golden chance on a counter attack when he wrong footed Jade North and found space at the top of the penalty area.  He drilled his shot low and hard but Roar keeper Michael Theo was up to the task.  Scores locked at 1-1, the game went into the second half of extra time.

At this point of time, I’d like to tell you about our Brazilian super sub, Henrique.  He’s a big match player.  Scored some clutch goals.  He’s also about 5″5.  He’s only a little guy but he still always tries to contest headers, even when jumping up against people over a foot taller.  Henrique’s hopeless attempts at headers have become something of a running gag for supporters.  In the Grand Final, something weird happened.  In the 112th minute, he contested a header with La Rocca and won.  None of us could believe it.  Substitute defender Matthew Donachie collected the ball for the Roar and crossed it back to Henrique.  He composed himself, turned and fired the ball into the roof of the net to win the Grand Final.

The Roar have played and won three Grand Finals now and have never scored earlier than the 84th minute and have lead for only 8 minutes across 3 games.  They have become the masters of the last minute escape.  I was fortunate enough to see it once in my life.  Then spoiled to see it happen twice.  What can you say when your team gives you that kind of theatre for a third time?

It was a special occasion and a fitting end to a brilliant season.  We won the Premiereship and Championship double.  Besart Berisha left the club on the highest of highs.  He was in tears and thanked the fans in his farewell interview.  Thomas Broich is playing some of the most ridiculously sublime football this country has ever seen and is surely a serious consideration for the greatest A-League import of all time.

With 3 championships in 4 years, the team has established a dynasty.  When I first started writing about being a Roar fan, they had won zero titles and finished 9th in the previous season.  I was inspired by a journalist Tim Parks who spent a season following unfancied Italian side Verona FC.  Look how far they’ve come!  Today the Roar are the leaders of the competition and this years squad may well be the best they’ve put together.  It’s pretty hard to build a quality football team with a $2.4 million salary cap but Mike Mulvey’s team has been absolutely phenomenal.  Berisha and Broich will be legends in the competition when they retire.  You can’t ask for a stronger midfield in Australian football than one with Matt McKay, Luke Brattan and Liam Miller.  Matt Smith has been a rock in defence and Michael Theo has been getting better with age as our goalkeeper. 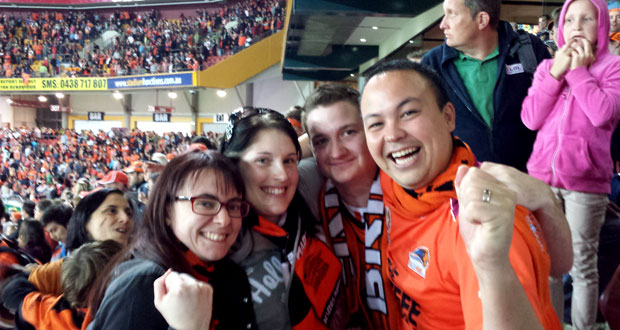 Jen, Melissa, Luke and I. The four of us were season ticket holders and experienced the season together.

This season has been a great journey.  I saw it through with Jen and our friends Luke and Melissa.  There were plenty of great memories.  Those last minute winners against the Heart, Phoenix and Victory.  Seven come-from-behind victories this season.  The 4-0 drubbing against Sydney FC in the season opener.  The first ever win over the Wanderers.  There were some downers too.  Berisha’s three red cards.  Basically anything involving Newcastle Jets.  Still, you can’t ask for much more than two trophies and a ten point lead at the end of the season.

The only sad thing about writing this today is that the wait for the new season starts now.  Five long months.  The Australian off season is one of the longest in the world.

So long, A-League Season Nine.  It’s been a blast.