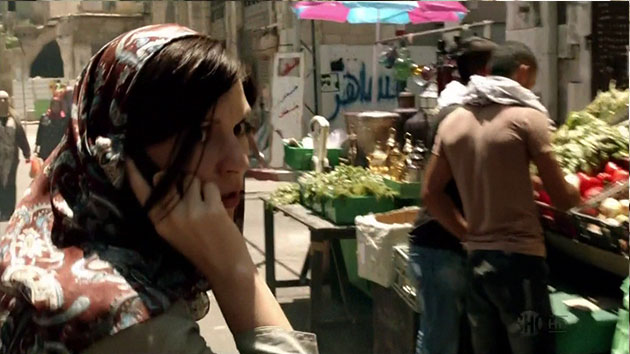 A friend of mine recently inquired about the show Homeland which recently returned to air after cleaning up at this season’s Emmy awards.  “Is it worth watching?”  I couldn’t give him a straight answer.  It’s a great show but its perpetually one episode away from collapsing into 24 levels of silliness.  I’m talking evil presidents, mountain lions, the whole lot.

It might sound odd when describing a show that is two seasons and fifteen episodes deep and yet this show has always walked a precarious tightrope with its story telling quality.  It’s an exciting and tense political thriller but the plotting and red herrings can only last so long before the writers will have to play their hand.  And I have no idea if they will be able to stick the landing after setting up an interesting premise in the first season.

The biggest attraction for me with this show is the character of Carrie Mathieson who is immensely captivating as portrayed by Claire Danes.  Carrie is a passionate and successful CIA field officer but her ability to do her job is greatly hampered by her bi-polar disorder which she had attempted to hide from her colleagues.  Few TV shows that I can think of have a willingness to take a chance on a lead character with this condition and Danes is brilliant in portraying Carrie’s vulnerabilities.  The first episode of the second season gets its name from a scene late in the episode when Carrie is thrust back into undercover work and after a narrow escape from a kidnapper, she flashes a brief, understated smile at the camera that shows in equal measures her love of her job and how enthralled she is with dangerously throwing herself in harms way.  It encapsulates her character wonderfully.

Damian Lewis, who plays the other lead role of Nicholas Brody is an equally accomplished actor but he is being given increasingly tougher material to work with and its his ‘will he, won’t he’ terrorism story arc that I think will be the undoing of this show.  Lewis himself is perfectly fine in this episode as his character begins preparing for a life entering politics.  What is irksome however, is the show’s insincere posturing and moralizing on Islamic relations in America.  Take the scene at a preppy high school where Brody’s daughter lashes out at a bigoted student who accuses all Middle Eastern people of being terrorists that need to be preemptively wiped out.  It’s all well and good for a moral voice on the show to lecture the audience and explain that Arabs needn’t be defined by the acts of a few terrorists but that message is undercut drastically when every Muslim character on this show is potentially a terrorist.  It’s fine in the context of a genre thriller.  Not so much when its trying to get A Message across to its audience.

Overall though, this was a promising start to the season and even though I’m a little dubious about whether the writers can pull this off, I am in for the long haul as long as Danes and Lewis remain there. 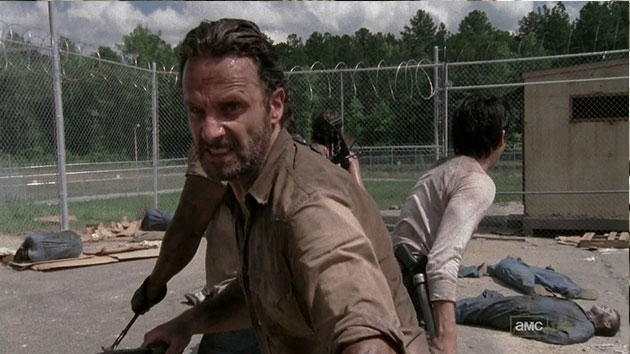 The second season of The Walking Dead is so weird, as is much of the context surrounding the fortunes of the show.  Stripped of the budget it enjoyed in its first season and faced with a new producer, the season had incredibly wayward pacing where the first four episodes (which felt about 10,000 hours long) were set on a farm in the middle of nowhere where Rick and the gang spent their entire time searching for a little girl that the audience had been given no reason to care about.  The season was then padded out with nonsensical drama to stretch out the next few episodes (remember Lori randomly crashing her car?) before coming home strong with an excellent last couple of episodes that finally showed some purpose, stronger characterization plus much improved writing and direction.  Inexplicably, the entire season had record high ratings on AMC.  I’m not quite sure why.  Also, women seem to love the show which I didn’t expect at all.

Seed, the first episode of the third season, starts off showing the same promise and improvements as the end of the second season.  I love the wordless introduction which shows how capable the gang have become as hunters.  They travel in a pack, kill efficiently, but food remains scarce and they must always be on the move.

In this episode, the gang make plans to take over a prison block which is a storyline that will be instantly familiar to anyone who has read the comic books.  This first episode was full of action, got the story moving along at a cracking pace and laid out what we can expect for the rest of the season.  I think they’ve made a wise move toning down Lori’s annoying mannerisms and they’ve done a great job showing how Carl has begun to adapt to his surroundings without overselling it in the dialogue.  I’m happy with the introduction of the character Michonne and I think the actress they’ve found is a sufficient badass.

I’ve had an up and down relationship with this series but I have high hopes for season three.  This is a good start.

Tagged with: Homeland The Walking Dead

Previous: Don & Ritzy Do West Malaysia and Singapore
Next: The Walking Dead – Long Road Ahead