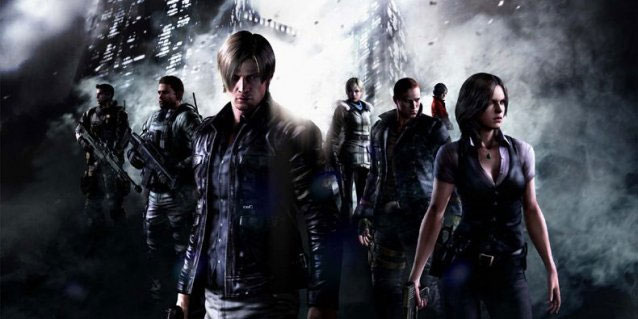 
Probably more than any other game that I can recall in recent memory, Capcom’s Resident Evil 6 epitomizes a game that is scrambling to keep up with modern gameplay trends but their creators have seemingly missed the boat on how to build a user-friendly UI around it.  Somewhere inside Resident Evil 6 is the foundations of a good game but it is surrounded by a rickety and archaic set of design choices that frustrate and confuse in equal turns.

Nowhere is this bloated and unwieldy interface better exemplified than in the starting menu when you boot up the game.  The journey from choosing to continue from a current save file to playing the game takes you through eleven button presses and menus.  ELEVEN.  Compare that to Grand Theft Auto IV from four years ago which requires zero button presses to continue from a recent save file.  The game just knows to start from there and remembers your settings.

Although there is a unifying story about a virus outbreak that kills the President of America and spreads throughout Hong Kong, Resident Evil 6 splits the game into four separate campaign modes which actually gives you pretty good bang for your buck.  There are three dudes – Leon, Chris and Jake – who have campaign modes designed around co-op play and Ada Wong who travels lone wolf.

RE6 effectively completes the trend that started at Resident Evil 4 which has transformed this game from a horror title into a run and gun shooter.  Considering the barren landscape that is the Survival Horror genre currently, this is a disappointing development.  Perhaps not entirely unsurprisingly, the game seems to have been most influenced by Activision’s monstrously popular Call of Duty series.  Just like CoD, Resident Evil 6 is a barely coherent chain of action sequences that fly in thick and fast.  Buildings crumble, streets are overrun with zombies and as a strict rule of thumb, any aerial form of transportation must crash and exploded into a flaming wreckage.

Although the overall package is rather exhausting with its relentless pace, individually I found some of these scenes to be quite enjoyable, although perhaps not quite what I wanted in a Resident Evil game.  Disappointingly, there are no real moments of genuine tension or horror.  The game is too preoccupied with blowing things up and making loud noises.  Having said that, my favourite passage of gameplay in RE6 would be the moment when you’re trapped inside a store with some other civillians and have to survive an onslaught of zombies.  The enjoyment of this scene is heightened by the ability to share the experience not just with a co-operative partner but with other people joining in and playing as the monsters.

Without a doubt, the highlight of Resident Evil 6 is the creature design which is full of impressively grotesque and repulsive monsters that show Capcom at their creative best.  A highlight is the ongoing mutations taken on by a villain in the Leon Kennedy storyline.  John Carpenter’s The Thing seems to be a particular source of inspiration for some of the mutations that this creature takes on.

Although there are patches of greatness in this game, the core design elements are like playing something from ten years ago.  The game has an experience points system but annoyingly, you have to manually pick them up and the number of points allocated for killing an enemy seem to be completely arbitrary.  Sometimes you are given a massive number of points for killing a generic zombie or destroying a crate and other times you get squat.

The controls are needlessly complicated and even worse, the game’s manual doesn’t tell you everything and the game doesn’t have a tutorial.  How bad could this be?  It wasn’t until I read on a message board that I discovered that there are roughly ten different controls and moves which aren’t communicated by the developers whatsoever.  And they’re not particularly intuitive or easy to discover by yourself.  There’s a lot of ‘hold down this/while pressing that.’

Further to that, the game doesn’t have a save option and check points are annoyingly spaced apart so if you end a game abruptly to take a phone call or something, you can potentially lose up to 10-15 minutes of progress.  How these kinds of design choices can exist in 2012 from a major game developer beggars belief.  The game also has some annoying cracks that appear in its set pieces.  There are times when you might pass a seemingly dead body and years of horror movie experience tells you its worth popping a couple of rounds into the body just to be sure.  Unfortunately in Resident Evil 6, the game will just cheat and have the creatures spring to life as you walk past, even if you try and take the precaution.

One gameplay quirk that did bring a smile to my face – because it was so shamelessly ‘gamey’ – is that killing zombie dogs in this game yields ammo.  Gotta love bullet-carrying canines.

Whats clear is that despite its shortcomings, people want to see Resident Evil succeed as a franchise.  Despite getting the worst review scores I’ve seen for a mainline Resident Evil game, it still sold like gangbusters and a sequel is almost certainly assured.  But after a wayward Resident Evil 5 and a substandard Resident Evil 6, the patience of Survival Horror fans will be wearing thin.  Capcom can do better than this and the franchise deserves more.  I think its time to jettison the needlessly convoluted storyline, reboot the series and return to its horror roots.

Summary : A weird and unsuccessful amalgamation of Resident Evil 4 and Call of Duty. The once mighty series has never been so wayward and disappointing. Time to reboot it or let it rest a while.

Previous: Time For A Holiday
Next: My Plans For the Rest of 2012