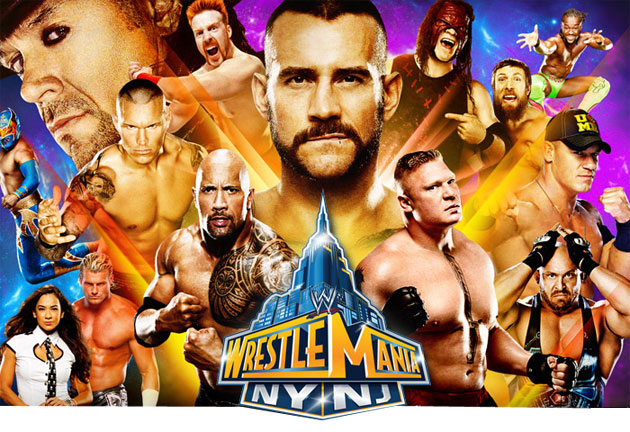 Wrestlemania 29 is taking place tonight, emanating from the outdoor Metlife Stadium in New Jersey where a ridiculously large crowd of 80,000 people are expected for a show featuring a whole bunch of old dudes who have been wrestling forever.

The card is a mixed bag.  It features a lot of marquee matches but all of them are repeats.  The headlining matches are John Cena vs The Rock, Triple H vs Brock Lesnar and CM Punk vs The Undertaker which have all taken place before in past years.  Having said that, there is a lot of potential for some great matches and its always fun getting hyped for Wrestlemania anyways.  It’s generally treated as a ‘season finale’ for storylines and you can usually count on something significant happening on the show.

Here’s a breakdown of the card and my tips. 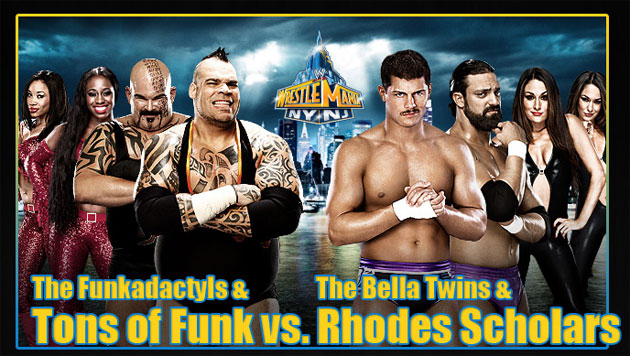 I like this match because it embodies the silly fun of pro-wrestling that made me a fan during the Eighties.  One team is a bunch of dancing fat guys and the other team are intellectual snobs.  Cody Rhodes is most famous for his moustache which gets its own chants during matches.

I’m going to go for Tons of Funk.  They’re like a 21st century combination of Akeem and Dusty Rhodes.  I expect they’ll win and then dance for a bit in their post match celebration.  It’s a four hour show and there’s time to kill.

Winners:  Tons of Funk and the Funkadactyls 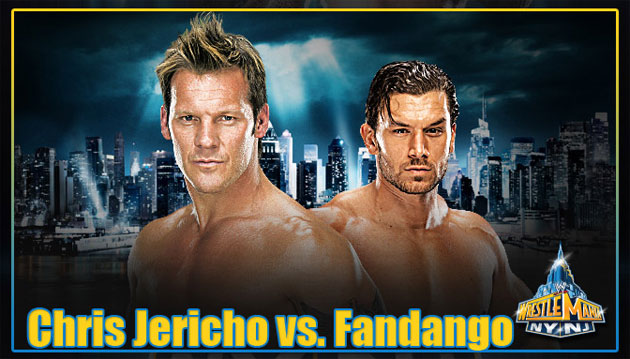 Chris Jericho wrestles for fun nowadays.  Having already accomplished multiple world title reigns in his career, he now balances his time between touring with his rock band Fozzy and wrestling during the Road To Wrestlemania season.  Even he must be a little surprised that for his current run, the company decided to stick him in a feud with jobber to the stars Curt Hawkins who has been repackaged as the ballroom dancing fighter Fandango.  Fandango’s gimmick is that he doesn’t wrestle.  Each week, he comes out, gets upset that the announce doesn’t announce his name with enough gusto and then walks away.  It’s sort of a Honky Tonk Man type deal.

Anyway, I expect Jericho to put him away and send him packing.  A good tip for the shortest match of the night. 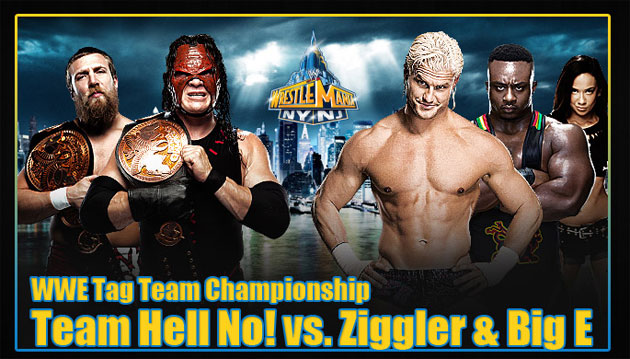 This is one of my most anticipated matches on the card.  All five performers here – Daniel Bryan, Kane, Dolph Ziggler, Big E Langston and AJ Lee – are great wrestlers who have a wonderful sense of comic timing.  Both teams are borderline comedy wrestlers at this stage in the spirit of Edge & Christian in the early 2000s.  Bryan and Kane implausibly became one of the most popular and over tag teams in recent memory through a series of sketches where they underwent anger management classes.  As for Ziggler, Big E and AJ, they remind me of the type of the band of misfits you would see in a Josh Whedon production.  Ziggler is a vain leader, AJ is a wisecracking comic book nerd and Big E is the muscle who has a fun little brother/big sister relationship with AJ.

I don’t really care who wins this match.  I just want them to be given 10-15 minutes to have an entertaining back and forth match.  Don’t let me down, WWE! 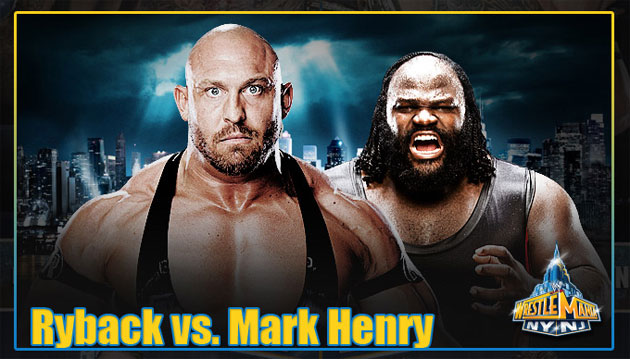 Ryback versus Mark Henry is a weird proposition.  Normally sticking two power wrestlers in a match together doesn’t really work.  You only really get to appreciate their strength when they have a Shawn Michaels type of performer who can bounce off their strikes like a ping pong ball.

That said, Mark Henry is probably the most motivated that he has been in his sixteen year career and the continued success of Ryback’s character is predicated on his ability to delivery jaw-dropping power moves.  This match should finish with Ryback winning by delivering his finishing move Shellshock on Henry.  It will be a sight to see if he can do it. 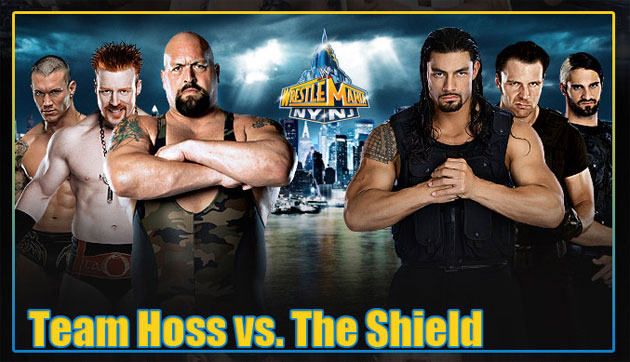 The Shield are a shockingly well booked new stable of vigilantes who beat up top tier faces and beat them clean.  The only thing they’re lacking is a stronger sense of purpose and storyline direction.  I mean, they came in, defeated a team of Randy Orton, Sheamus and John Cena clean as a whistle.  So where do you go to from there?  It’s not like we have the Freebirds rule and they can win a 3-man tag team belt or anything.  I have a feeling that the Super Best Friends will win here.  I don’t really mind that.  I just want The Shield to have something more specific to do after this. 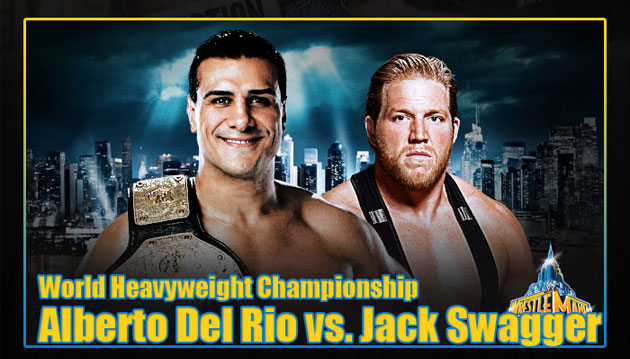 One of the most interesting matches on the card for the backstage politics involved.  Jack Swagger was unexpectedly given a push to the main event of Wrestlemania out of nowhere and then promptly got arrested for driving under the influence of marajuana.  Presuambly Del Rio wins the match here but it will be interesting to see how the match unfolds and whether Swagger is given his marching orders afterwards.

Another point of interest is that in recent years, the company has gone from treating this title as an equal to the WWE Championship to the current situation where its viewed more as a mid-card belt, akin to the Intercontinental title.  Last year  the WHC match was the curtain jerker in a 17 second match.  Will it receive the same treatment again this year? 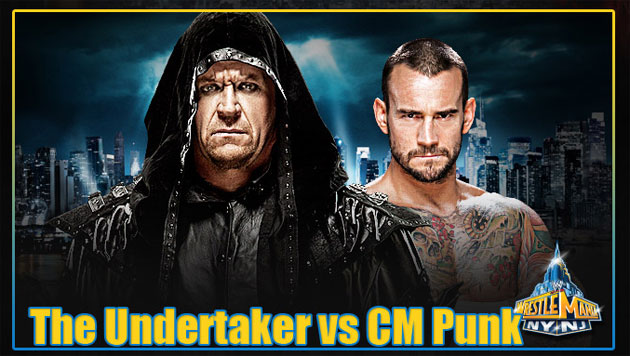 The match with the most foregone conclusion on the card.  I’m pretty sure they advertise this match as The Undertakers beats CM Punk.  And rightly so.  In the last four weeks, CM Punk has been tormenting The Undertaker over the real life death of his manager Paul Bearer.  He even went as far as to kayfabe scatter his ashes over The Undertaker’s body.  I presume this match will be about twenty minutes of The Undertaker beating the shit out of CM Punk.  I think it is widely accepted that this is The Undertaker’s penultimate Wrestlemania performance.  He probably has one good match left in him after this one.  It would be kinda neat if at Wrestlemania 30 he puts his two decade long undefeated streak on the line against a heel John Cena…

A weird thing about wrestling is that this match is a reward for CM Punk.  Punk has had an inconsistent career in WWE but that all changed recently when he had a superb 2012 where he held the WWE Championship for over 400 days.  In a round about way, getting the Wrestlemania match against The Undertaker where he gets the snot beaten out of him is considered an honour. 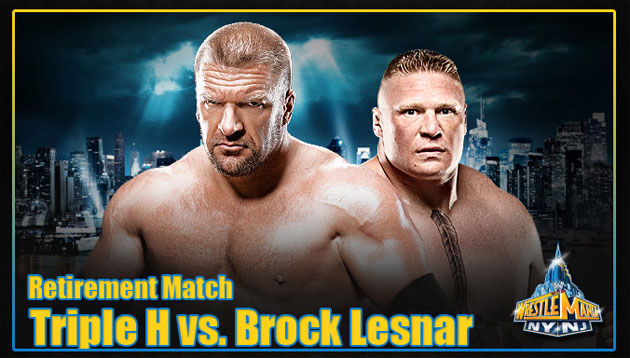 Brock Lesnar is all kinds of awesome and I’m glad he’s back in wrestling.  His last match with Triple H was pretty good too.  Triple H tried to give a retirement speech at the end of the match only to get laughed out of the building by a smarky Los Angeles crowd that chanted ‘you tapped out’ at him.  Now he’s looking like doing a second take at Wrestlemania with a formal billing for the retirement match.  Storytelling convention tells us that Triple H will lose this match.  If he’s not going to lose, why bother with the retirement stipulation in the first place?  He’s been wrestling for 20 years, has won everything there is to win and barely wrestles anymore anyway.  Is this finally the end of an era?  I think so. 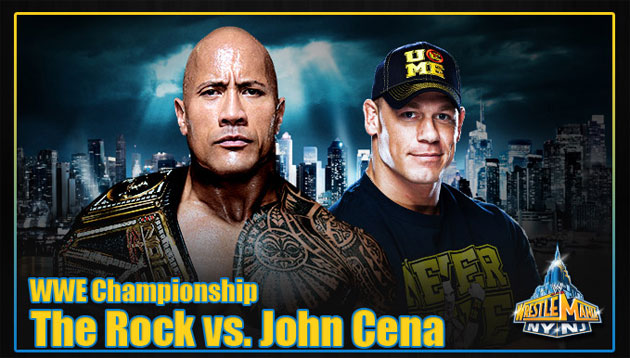 For all the shit that the WWE gets for its short-term booking on the fly, its pretty crazy to think that this feud has pretty much been running for about 24 months, starting at Wrestlemania 27 when The Rock was the guest referee in John Cena’s match that year and building to this second encounter at Wrestlemania 29 where John Cena finally beats The Rock.

The only really point of interest here is whether Cena turns heel.  People who are bored of his character have been clamouring for a heel turn for years.  Has the moment finally arrived?  We shall see.

Previous: Roger Ebert has died
Next: TV Show Round Up: Wrestlemania 29