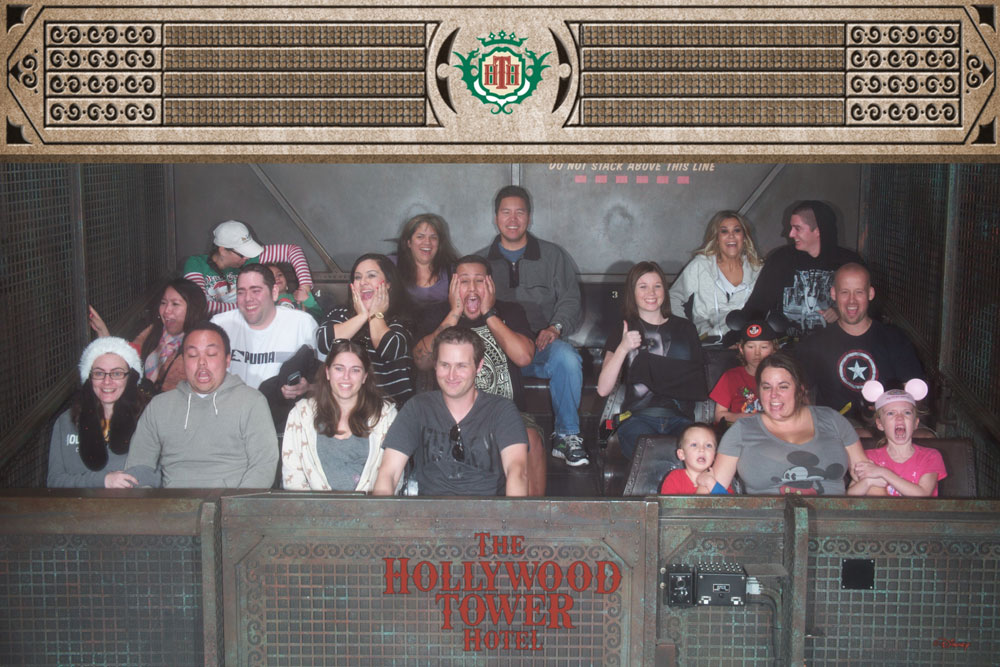 The Hollywood Tower – a pleasant distraction for some, a terrifying journey for others (click to enlarge)

After our short stay in Los Angeles, we headed up to Anaheim for a couple of days.  Anaheim is 45 minutes or 3 hours drive away from Los Angeles, depending on the traffic.  It’s best known for being the home to many famous theme parks including Knotts Berry Farm, Legoland, Seaworld, Universal Studios and of course, Disneyland.

“If Romney won the election,” explains a Democrat-leaning cab driver, “then he’ll give everyone guns!  Can you imagine?  We’d all be dead…”

In Australia, some of the most vocal and outspoken political advocates you will meet are taxi drivers and in America, its no different.  You don’t really get much of a chance to talk shop if you’re doing a 5 minute ride but when you take a shuttle service between Los Angeles, Anaheim and LAX, you can get a pretty good conversation going.  By reputation, American politics is hopelessly partisan and needlessly divisive.  There is very little common ground that Republicans and Democrats share and its not helped by massive amounts of misinformation and unhelpful generalizations that both sides spout off.  My first hand experience with taxi drivers was that they certainly fit this description.

In the shuttle service between Anaheim and LAX, a Democrat supporting driver explains to me how he didn’t vote for Romney because he would ‘give guns to everyone.’  I have no idea where he got this idea from.  Later on, I was in a shuttle service from L.A to Anaheim with a shuttle driver and he was an anti-Obama conservative.  Although he didn’t particularly like Mitt Romney, he did however believe that there was nothing wrong with his infamous ‘47%’ speech that he gave to donors in which he claimed that nearly half of America are ‘victims’ who pay no income tax and will vote for Obama because they expect free food, health care and housing.

I found it rather depressing that both these drivers, who inherently seemed like good guys, were so full of bizarre ideas about what their political opposition represented.  I think they have plenty of challenges to compromise on without getting muddled up in random nonsense that doesn’t have a grain of truth to it.

Curiously, both drivers seemed happy to bag out their state-level politics and were in agreement:  Californians like voting for people who promise big things (high-speed rail service, environmental reform, improving the roads) but then they kick them out when they decide they don’t actually want to pay for any of it. 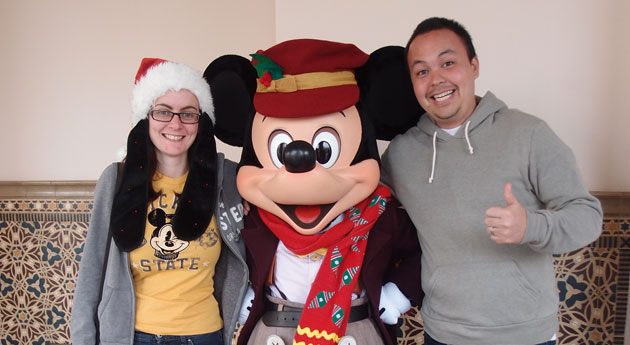 I was pleasantly surprised with Disneyland in Anaheim.  I had only previously been to Tokyo Disneyland which I loved as a kid but the magic had worn off as I had gotten older.  Fortunately, there’s plenty in Anaheim’s Disneyland and the adjacent California Adventure Park to keep an adult occupied.  As a traveler’s tip, December is an awesome time of year to go.  It’s still warm in California but because it’s offpeak, the queues for rides aren’t nearly as long.  And although Disneyland itself is mostly comprised of rides that are suitable for all ages, California Adventure Park has plenty of thrill rides geared at adults.

Better still, there was also a whole bunch of other entertainment that I didn’t anticipate including a House of Tomorrow area that was basically a tech exhibit of interesting prototypes made by Microsoft and Samsung.  There was also an exhibit there from Honda that showed off Asimo, an advanced robot that is shaped like a humanoid.  If you have even a passing interest in technology or robotics, it’s pretty fascinating to see Asimo first hand and watch this wonder of engineering navigate a set of steps, walk backwards, balance on one foot etc. 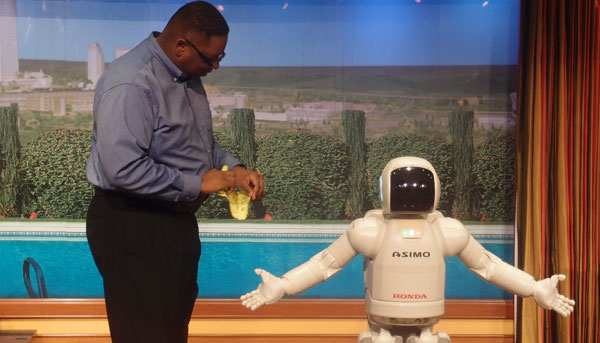 Disneyland has a surprisingly decent range of bars and restaurants.  Now, I don’t know about where you come from, but in Australia, my expectation of food at a theme park is a day-old burger and chips that’s served with a watered down cola for fifteen bucks.  In Disneyland, there’s nearly twenty different places to eat that actually serve decent food and drink.  There was an excellent bar called Paradise Pier which is located right next to the water feature where they do the World of Colour light show.  It was a very pleasant way to wind down a long day, drinking craft beer and $10 cocktails, enjoying buffalo wings and having front row seats to a show that combines music, jets of water and synchronized lighting.

Universal Studios, on the other hand, was a touch disappointing.  Particularly after visiting Disneyland first, it’s underwhelming to visit a famous theme park and discover that they have a grand total of five rides.  Worst still, my most anticipated experience, the Jurassic Park ride, was closed for maintenance!  Boooooooooo!!!!

While I can appreciate the enourmous amount of history that exists at Universal Studios, the actual touring experience isn’t all that its cracked up to be.  Let’s face it, at the end of the day, you’re mostly driving around looking at the outside of giant sheds while a tour guide explains that someone famous is probably inside shooting something really cool.  You don’t actually see Ryan Gosling chilling out, having a coffee and giving a friendly wave or anything like that.  Hell, you barely even see any extras or show runners.  That’s why they jazz up the tour of the studios with a King Kong 3-D ride, a drive past a lake that has Jaws in it and a quick tour of some set locations for where they shoot Westerns.  The studio tour is okay, but there’s better ways to get a closer film and television experience as I would discover in New York.

While I appreciated the fact that it was off-season in Disneyland, it was probably a step too far at Universal Studios.  The place felt like a ghost town.  There wasn’t a single ride that had a queue and because so few people visit in December, half the place is closed.  This doesn’t serve particularly well for attractions like the Water World stunt show which had a half empty crowd.  If there can be such a thing as a theme park being ‘too quiet’, then this was it. 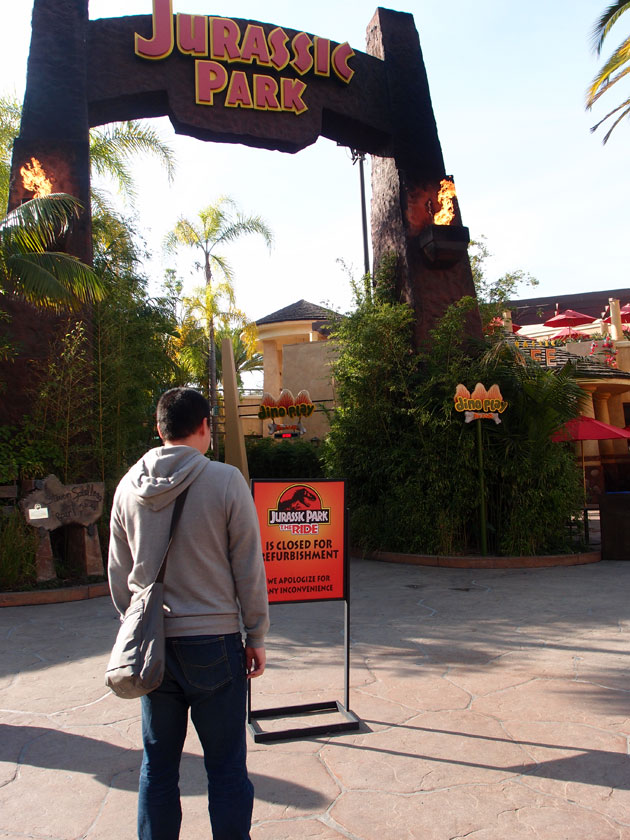 Once we were done with the theme parks it was time to head off.  Our next destination was San Francisco, where we’d be catching up with some old friends.