(Disclaimer:  The FATwebsite had some unusual down-time through the earlier parts of this year, therefore this post was pushed further to the bottom of my to-do list, but I feel that it references an important day in this year’s history for not only Britain but also for the world.)

The first day of April 2009 was the day in which the latest round of G20 talks was to begin in my humble new home of London. 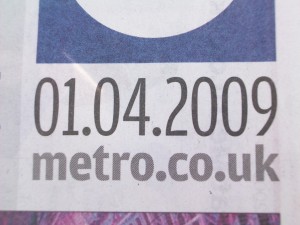 A lot had been made of these talks. It was the first summit of world leaders to be staged since the beginning of the recession. The economic climate of the past six months was up for discussion as financial institutes, banks and most other countries looked for leadership from the elected officials of the world’s 20 most financially able countries. Climate change was also heavily on the agenda as a combination of environmental lobby groups, governing body mandates (eg. the EU) and rising oil prices had finally forced countries to stop dilly-dallying and take a harder line regarding the worsening state of the planet.

As is customary with G summits, whether it be G7, G8 or G20, there were heavy and in large part peaceful protest scheduled throughout the 5 days with marches, parades, flash mobs and general outbreak of human interaction throughout the city. So on that sunny April morning what else was there to do but go and take a closer look. 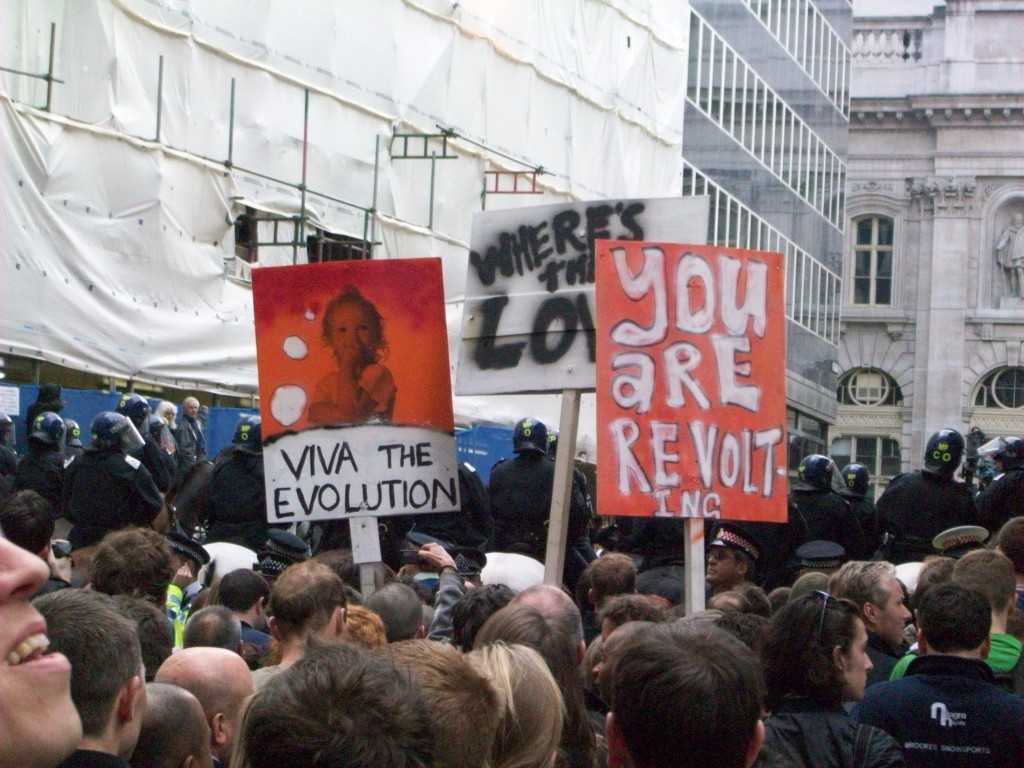 Pickets: People from all different view points were protesting

I stepped out of a tube stop in the city and set about on foot. One thing that was immediately apparent was the vibrant excitement that was in the air. Many people had taken the day of work, or were extending their lunch breaks by a few hours. The city was awash with people of different creeds, backgrounds and races. But despite the excitement, there was a waft of complete uncertainty around the streets, how far would the protests go? G summit protests have always been notorious for ending with violent clashes between protesters and police. Leading up to the week bankers were advised to dress in ‘civilian’ clothing as so not to be targeted by anti-capitalist protesters. 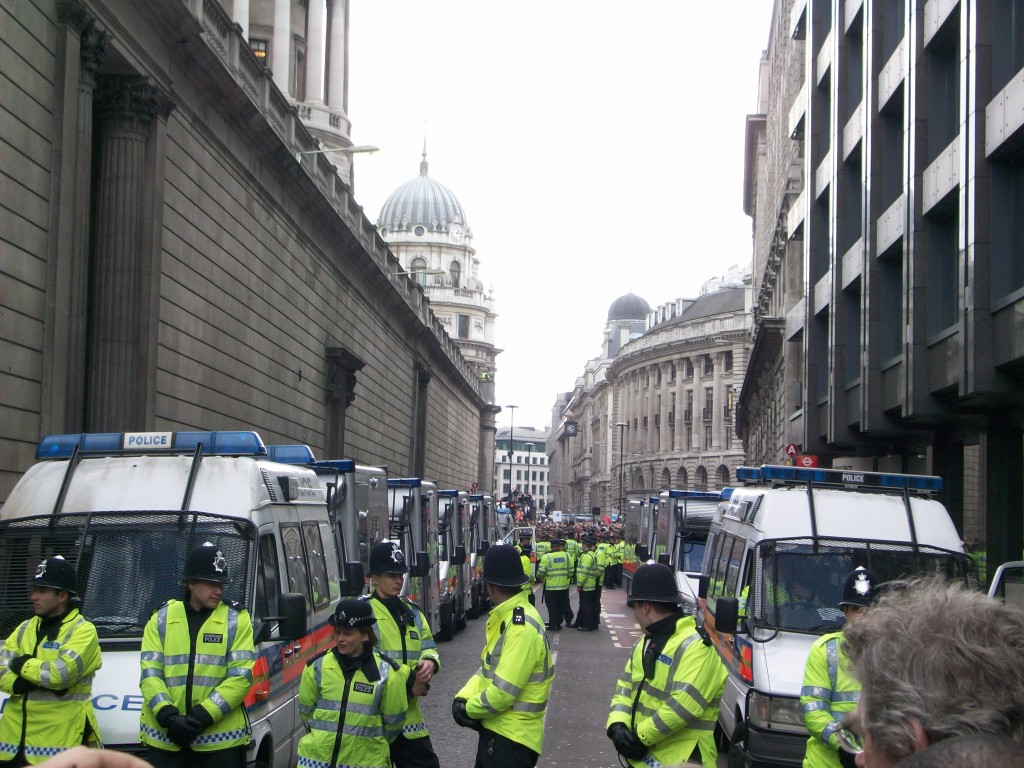 As I made my way deeper into the heart of the protests things seemed jovial, people were laughing, playing music, dancing and heckling others in good spirits. There were people orating from on top of bins about the end of the world, the downfall of capitalism etc. Cameramen and photographers were out in there droves to try capture ‘that moment’. The mood was good.

The main protest scheduled for the day was an elaborately symbolic one. A group named ‘G20 Meltdown’ planned four marches to begin in different locations, then all congregating outside the Bank of England. Each march was to possess a uniquely coloured skeletal horse puppet, and it was dubbed the ‘four horsemen of the economic apocalypse’.  I ended up within the throng of the black horse. 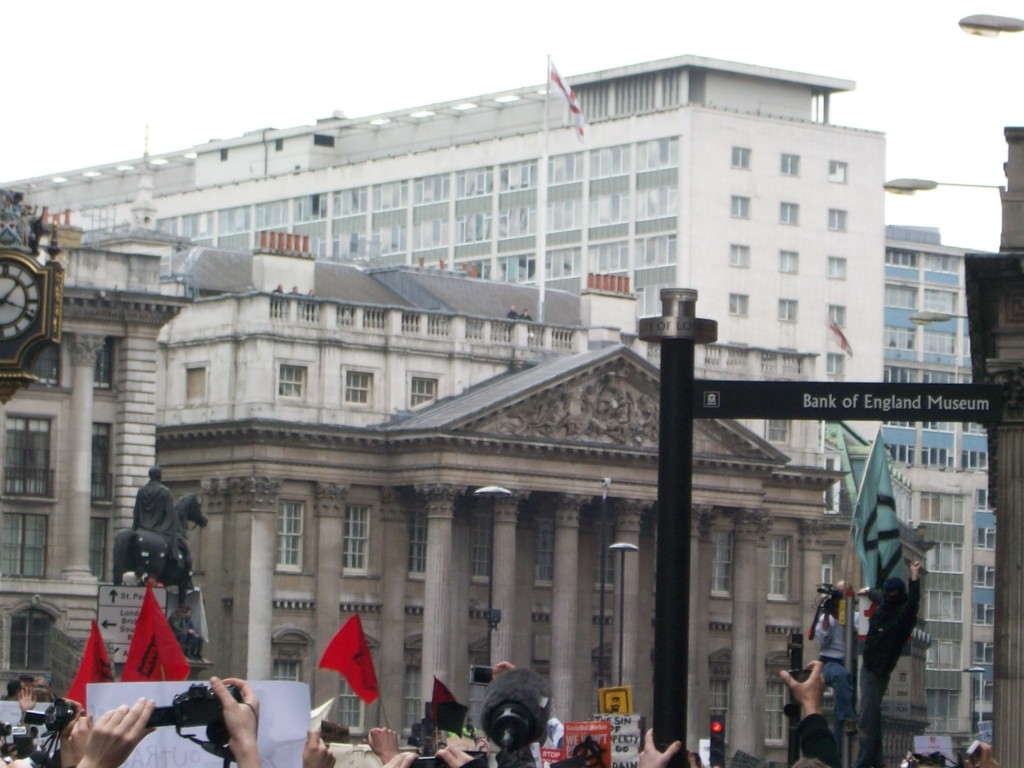 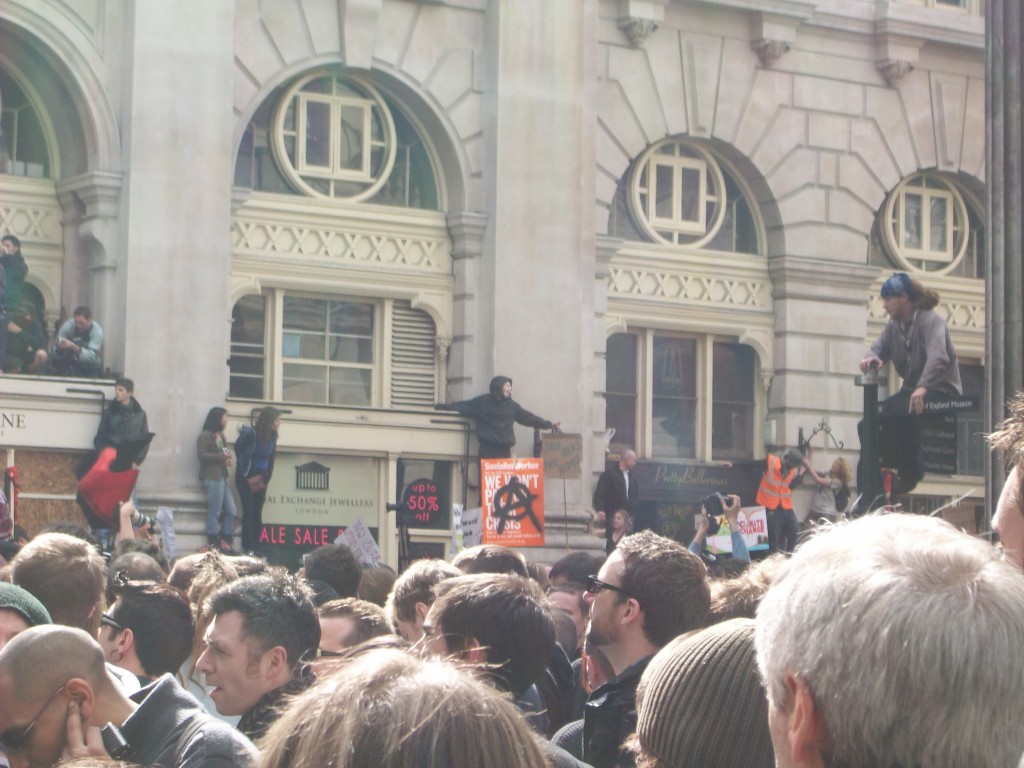 Off course: the march carries on

As the marches began to reach their destination, there was the precarious balance of trying to accommodate 5,000 protesters within limited space, and the marches took their own paths and kept moving. The police were none too happy and their mounted colleagues were called in. Of course none of this was relayed to the protesters and suddenly I found myself between with a throng of crowd heading towards me, standing outside the Royal Bank of Scotland (RBS), and a wall of riot police on horseback. 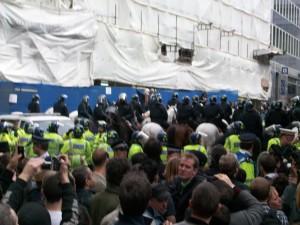 Things started to get a bit worrying as the police attempted to lockdown the streets with barricade to keep all the protesters from sprawling. This seemed to increase the tension in what had been an overall peaceful demonstration.

Upon finding myself being increasingly trapped and with the risk of being stuck for hours in a potential hotspot of crowd surge, I made a dash towards the scaffolding that is shown in the image above, and I managed to get away using the walkway that runs underneath it.

It was a good a good thing I got out too, as when I got home and turned on the TV, where I had just been was being shown on the live feed. The halted march had been bottled up where I was and in retaliation had taken to smashing the windows of the RBS in front of which image 5 was taken.

In closing, what I witnessed on that day was several things. The clear indication that people were unhappy with the role of the banking systems around the world that seemed to recklessly gamble away their money and subsequently, in this country, were given billion pound bailouts funded by the very same people who they had abused their trust. Now, I am not an economist by any standard but what happened on those marches was the masses turning out to exercise their democratic right to show their displeasure and were in large part handled very professionally and well by the police, barring a very few incidents (R.I.P Ian Tomlinson).  The dancing, singing, chanting, marching and even the fighting to me is testament to the seriousness of the times that we live in, and in a country so politically ignorant such as the UK (note: in terms of democratic participation) it was great to be a part of a time when the world’s eyes were on our capital and the people stood up to show that what has happened is simply not acceptable.