This game was reviewed on Xbox 360.

“Bring us the girl and wipe away the debt!”

And with that memorable opening line, Bioshock Infinite introduces us to the twisted sky city of Columbia, ruled by the despot Zachary Comstock who commands a xenophobic, religious metropolis that is enthralled with American exceptionalism.

Players take control of Booker Dewitt, a trouble war veteran who finds himself indebted to the Pinkertons in New York and sent on an errand to liberate a woman named Elizabeth.  It won’t be easy.  She is locked away in the keep of the tallest tower in Columbia which itself is guarded by the Songbird, a terrifying winged mechanical creature that guards Elizabeth from any unwelcome visitors.

As with the original Bioshock before it, the first half hour of Bioshock Infinite is a sight to behold; a mesmerising passive carnival ride in where one can soak in the sights of the fantastic cityscape that Irrational Games have created.  Exploring the sun soaked streets of Columbia, interacting with amusement park distractions and listening to a barbershop quartet sing a gospel adaptation of the Beach Boy’s song ‘God Only Knows’, you can get a sense of just how much effort was put into creating this convincing and coherent backdrop for the story that unfolds. 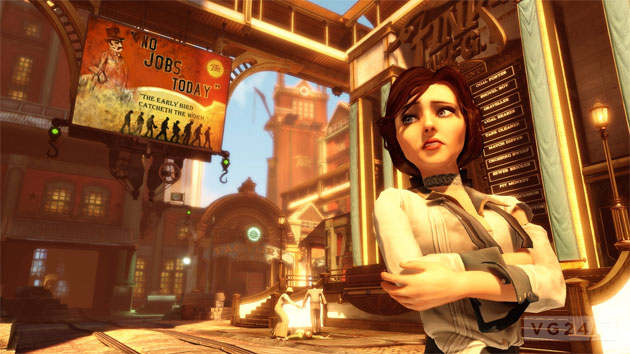 The story kicks off in earnest when we first rescue Elizabeth who then becomes Booker’s companion for most of the game.  There is almost a Disney Princess quality to Elizabeth, both in her appearance and her earnest pragmatism.  Credit where its due to the developers: Irrational Games have done enourmously well to create a character that is useful in gameplay, full of chatter and easy to bond with.  In the few instances where Booker separates from Elizabeth, you quickly notice how much quieter things are and how much isolation you typically experience in a first person game.

As Booker tries to lead Elizabeth to safety, the two fugitives in Columbia traverse a wide variety of locales.  They come by the God-fearing All American nuclear families that occupy the beaches, cathedrals and carnivals.  They also cross pathes with the ethnic minorities and working class labourers who toil in the underworld, shunned and tucked away out of sight.  Bioshock Infinite confidently tackles themes of jingoism, exceptionalism and class politics in a bald faced fashion that few other video games have dared to explore.  I can only think of Grand Theft Auto as the other major video game franchise that bares its political teeth so fiercely and even then, it does so under the guise of satire and deliberate crassness.

Tying the game back to the original underwater Bioshock games, Bioshock Infinite‘s gameplay is largely comprised of combat that mixes conventional shoot ’em up weaponry with vigors, known in previous games as plasmids.  Vigors allow the player to cast varying forms of magic that include fireballs, swarms of bats and miniature tornadoes.  As with Bioshock before it, combat in the game usually pits the player against waves of humanoid enemies and this normally devolves into a chaotic and noisy cacophony of bullets and screaming.  Adding an extra dimension to the combat this time is skyhooks, rails that interconnect the city of Columbia which the player can use during combat to ascend to a more advantageous position.  It gives a verticality to the combat is traditionally about circle-strafing and cover seeking.  To the developers credit, they have dodged a potential point of frustration by making it difficult, but not impossible, to fall to your death.  I think I only managed it twice in my entire playthrough.

Bioshock Infinite is an ambitious game in the political themes that it explores and it is complicated further still when it begins to play its hand with the narrative.  The final chapter of the game is memorably disorienting, confusing and ultimately revelatory.  It is worth staying spoiler free to experience this story firsthand.  But to make sure you haven’t missed the finer details, I recommend reading EuroGamer’s excellent post-game analysis.  It really is a story filled with detailed minutiae and flashes of foreshadowing that rewards a second playthrough.

There are few game creators working today that exhibit the creative flourishes of Ken Levine and although any video game is a multi-man enterprise, there are some shining moments in Bioshock Infinite that seem to borne out of his influence.  One of the cleverer instances where Bioshock Infinite blends the narrative with the gameplay is having Booker relive the Battle of Wounded Knee by walking through the wing of a museum dedicated to it.  In this sequence we begin to learn about Booker’s remorseful past, the way Columbia has distorted historical events to promote its political agenda and then at the end of the sequence, the player is presented with a simple moral decision which reflects the player’s interpretation of whether Booker really is a changed man or not.  The Hall of Heroes is one of the highlights of the game.

On another note, it should be noted that Bioshock Infinite probably makes one of the best uses of licensed music in a video game.  There are brief flashes of licensed songs that we see when Elizabeth rips open tears in the space-time continuum but where we do get to hear familiar songs in their entirety is through the citizens of Columbia who sing their own take.  Most memorable of all is perhaps the downtrodden homeless woman singing a raspy cover of Creedence Clearwater Revival’s Fortunate Son. 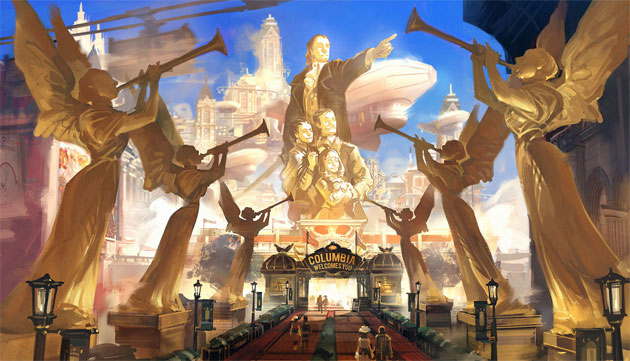 We’re in the twilight of the current console generation and Bioshock Infinite is about as good as it gets.  The world of Columbia is a magnificent sight to behold and thrilling to explore.  The story here rivals Inception in its scope and ambition.  And it also shows the creaky limitations that we have reached in terms of gameplay in contemporary gaming.  There is no faulting the fantastic presentation this game has to offer but it is ultimately wrapped around the same type of shooting and killing that we have been playing for nearly a decade.  No amount of self awareness about the reckless killing and repetitive nature of said gameplay really changes that.  And we are reaching a critical mass of games that involve massacring hundreds of goons with a self aware protagonist who sagely ponders this banal existence with a meta-textual self awareness.  Tomb Raider did it.  Spec Ops: The Line did it.  Max Payne 3 did it.  We get it.  You know that we know that this is repetitive.  Next generation, its time to do something about it.

Shoot for the stars

Summary : Ken Levine has built an amazing world and delivers an incredibly ambitious narrative. Pity the gameplay is so wretchedly derivative.

Previous: TV Show Round Up: Top of the Lake
Next: Per Se