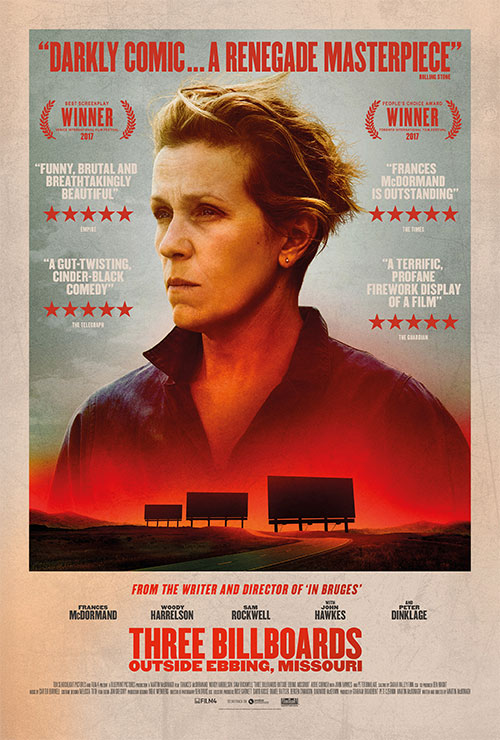 I think director Martin McDonagh is right.  There aren’t enough great female anti-hero characters in film.  Of the countless films I’ve seen over the years, I can’t really think of anyone like Three Billboard’s ferocious, take no BS lead Mildred Hayes.

Mildred (played by Frances McDormand in her best role since Fargo) is the devastated mother at the centre of Three Billboards Outside Ebbing Missouri.  Angry and still grieving at the senseless rape and murder of her daughter a year ago, a moment of inspiration strikes Mildred as she drives along a run-down street where she spots three dilapidated, unused billboards.  She visits the advertising agency responsible for them and pays for signage directly calling out the town’s sheriff for the lack of progress in tracking down her daughter’s killer.  And so begins Martin McDonagh’s pitch black comedy about the sad and broken residents in the town of Ebbing.

There are three main players that converge at the centre of Three Billboards.  There’s Mildred, who is not only coming to terms with the loss of her daughter but also the collapse of her marriage after her husband leaves her for his younger, prettier and braindead secretary.  One of the few things that forces Mildred to keep it together is her parental duties to her teenage son Robbie who still lives with her in the family home.  Mildred directs most of her ire at Sheriff Willoughby (played by Woody Harrelson).

Sheriff Willoughby is not who we think he is.  The set up for his character in a less creative film would have him be a one dimensional bad cop.  Instead, Willoughby is a well rounded and multi faceted character, and Harrelson is the perfect piece of casting to bring the role to life.  He understands Mildred’s frustrations, is exasperated by her outlandish behavior but has his own struggles to deal with.

Willoughby oversees the town’s law enforcement which for the most part is populated with lazy, corrupt and stupid police officers.  None are more idiotic or bigoted than Officer Dixon (Sam Rockwell).  Dixon is a directionless, angry and hopeless man.  We get some insight and understanding into how he came to be this way when we see the treatment he receives at the hands of his domineering mother who he still lives with.  Dixon clearly sees his job as an opportunity to receive a tiny shred of respect but Ebbing is too small a town and many an outing to the local bar at night begins with patrons asking Dixon how late his mother will allow him to stay out at night.

The clashes, conflicts and fiery exchanges between Mildred, Willougby and Dixon are the beating heart of Three Billboards.  There is an ever-changing dynamic between them and a thoughtful melancholy that underpins this tale and elevates the film to greatness.

Three Billboards is the funniest film that Martin McDonaugh has made, which is saying something as it stares unblinking at some of the American heartland’s darkest societal challenges.  This is a film about institutional police racism.  It is about the collapse of industry in small town America.  Sexual assault and battery committed by military troops abroad.  The church’s attitudes towards child abuse victims.  Gun violence.  Homophobia.  Xenophobia.  Domestic violence.  You name it.

I lost count at the number of times Three Billboards made me laugh out loud and I guess a big part of it is that it’s not shy about the ground that it treads and there is nothing restrained in Mildred’s verbal evisceration of the men who enable these problems.

By now everyone should know what a terrific actress Frances McDormand is.  She has been a favourite of mine ever since she rose to prominence playing the sharp-witted, fearless Marge Gunderssen in Fargo.  She is absolutely wonderful in Three Billboards and delivers a performance that (another Meryl Streep nomination not withstanding), should bag her a Best Actress Acadaemy Award win.  I was mesmerized by the juxtaposed tenacity and vulnerability of her character.

The film goes places in the final act which may lose some of the audience.  I was a little unsure of the road it travelled down myself.  But McDonagh opts to roll credits at just the right moment, leaving us to contemplate what Mildred does next.  Thinking back on it, it’s the perfect sign off.

A mother personally challenges the local authorities to solve her daughter’s murder when they fail to catch the culprit.

Summary : Frances McDormand is the reason to watch this film. It's her best performance since Fargo.