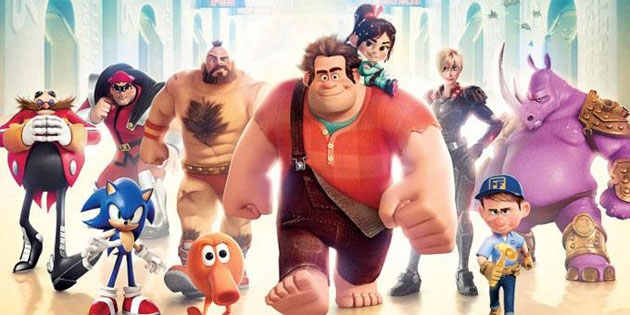 Wreck-It-Ralph begins with an idea so full of potential that you wonder why no one has done it before:  what if video game characters were sentient beings and they continued to exist and live their own lives even after the player has left the game?

Welcome to the world of Wreck-It-Ralph, a Donkey Kong inspired arcade game where the protagonist Fix-It-Felix must climb up a building, fixing shattered window panes as he goes, until he gets to the top at which point he and the townfolk toss Wreck-It-Ralph unceremoniously off the side of the building.

Felix, Ralph and the townsfolk are tethered to a central hub world and are interconnected with the video game characters from the other arcade cabinets.  Not surprisingly, folks with similar work tend to band together.  Felix hangs out with the heroes and Ralph is either alone or keeps company with the villains.

The video game villains develop a bit of complex about their line of work so they form a support group, like A.A, and talk through their issues and recite platitudes about their self worth.  Disney has reached out and done pretty well with their licensing here to set the scene:  Zangief, Bowser, Dr Robotnik, Clyde (a Pacman ghost) and M.Bison all make an appearance in the meeting.

The story kicks off in earnest when Ralph gets fed up with being ostracized by the townsfolk and inadvertently wrecks a party for Felix.  One of the funny idiosyncrasies about this video game world is that the character’s behaviour is still largely defined by their in-game characteristics.  Like a clutzy version of Midas, anything in Ralph’s hand tends to get broken or smashed.  Hilariously, Street Fighter’s Zangief is primarily concerned with performing spinning pile-drivers on people.

Ralph gets yelled at by the townsfolk for spoiling the party at which point he decides to leave his game and earn a hero’s medal for finishing the Campaign Mode for a game called Hero’s Duty, a mash up of Halo and Call of Duty.  Once he gets a medal, Ralph hopes he can fit in and improve his standing in the Wreck-It-Ralph community’s social order.

Wreck-It-Ralph is based on such a fun concept that it would be pretty hard not to make an enjoyable film.  Anyone with even a passing interest in video games should enjoy Wreck-It-Ralph as it is chock full of video game culture references, Easter Eggs and cameos.  All of this is wrapped around a pretty standard and inoffensive morality tale where Ralph learns to embrace who he is and develops a friendship with a snarky little girl in a Mario Kart game.

For whatever reason, the film is pretty front-loaded when it comes to the video game content and references.  When the story really hits its stride, a good chunk of the tale is set in a world made of cake that seems loosely influenced by Super Mario Kart‘s Choco Island stage but is pretty sparse on video game references.  I would have liked to have seen the little in-jokes and cameos continue right the way through the film but that’s only a minor quibble.

It’s not destined to be a classic but Wreck-It-Ralph is well executed film based on a neat idea.  And with the bar set so low, this is arguably the best video game themed film of all time.

Well, except for Mortal Kombat.  I still love that stupid movie to bits.

Note:  This article provides a pretty thorough listing of the video games referenced in Wreck-It-Ralph.