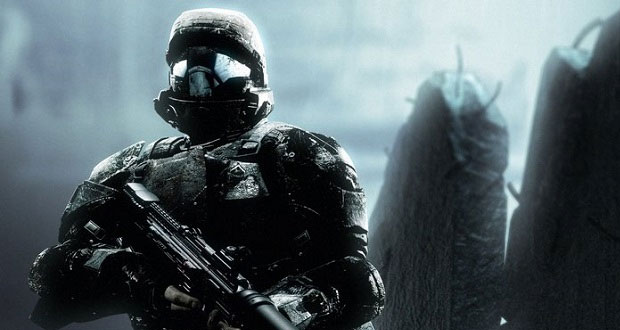 ODST sees the Bungie team revisit the Halo universe without the ‘constraints’ of having Master Chief as the central character.  Instead, the player starts by controling the mute Rookie, a new ODST trooper who gets seperated from his platoon when they drop into the decimated ghost town New Mombasa which has been taken over by the Covenant.  The story unfolds Pulp Fiction style, with a muddled up chronology and an ensemble cast voiced mostly by ex-Firefly cast members (Fillion, Tudyk and Baldwin).  A mystery unfolds as to the nature of their secret mission in the city.

Bungie look like they had a lot of fun with this concept, scrapping many of the signature Halo design motifs.  To match the tone of the story, the epic summer blockbuster soundtrack has been shelved in favour of mellow jazz.  The bright pastel colours of  past Halo environments make way for dark ambient streets lit with neon lights.  The biggest change of course, comes back to telling a story that doesn’t revolve around a superman who singlehandedly saves the universe.  Instead, the ODST team are here to complete a single mission and count themselves lucky if they survive an escape from the city.

By introducing a more vulnerable human element to this game, it changes the nature of the gameplay quite drastically.  The player no longer has regenerating health, can’t jump as high and can’t run as fast.  It changes the ebb and flow of the combat in the game from charging in with guns blazing to something more measured.  The end result is not anything necessarily better or worse, its just different and thats a breath of fresh air for this series.

Bundled in the box is a second disc with all of the existing downloadable Halo 3 multiplayer maps as well as three new ones, bringing the total count to 24.  This is a fantastic add-on as it comes close to unifying the selection of maps that frequent online Halo players have.

ODST doesn’t completely turn the Halo franchise on its head but nor does it need to.  There’s a fun 6-8 hour campaign here, a Firefight mode which is Bungie’s take on Gears of War‘s Horde, and a good opportunity to breathe new life into the multiplayer community.  It’s not The Orange Box, but there’s still a lot of value contained within these two discs.

Platform:  Xbox 360 Developer:  Bungie Publisher:  Microsoft Game Studios or otherwise known as Halo 3: ODST: Firefly Reunion Show. ODST sees the Bungie team revisit the Halo universe without the ‘constraints’ of having Master Chief as the central character.  Instead, the player starts by controling the mute Rookie, a new ODST trooper who gets seperated …

Summary : A fun, low key addition to the Halo franchise.