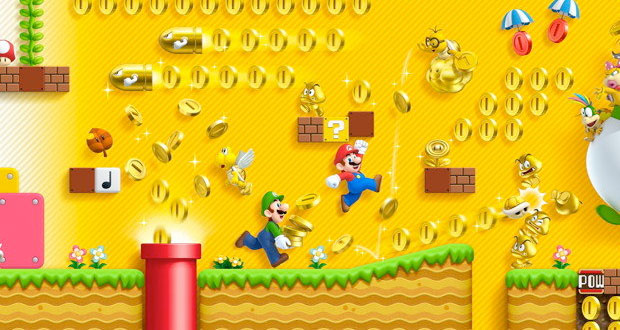 I would be surprised if there is a game more disappointing in 2012 than New Super Mario Brothers 2 for the Nintendo 3DS.

Two dimensional Mario platform games are as rare as hen’s teeth.  After the Super Nintendo, we have never had more than one appear per Nintendo console which means we get one every four years on average.  They come along as often as the Olympics.  I’ve come to appreciate Nintendo’s restraint.  It’s certainly better than the annual updates that other companies trot out for their major franchises.  Yet it also results in some serious disappointment when they’re off the mark and New Super Mario Brothers 2 is exactly that.

The game feels like a lazy cash-in and thats rather unfortunately characterized by the game’s coin collecting gimmick.  It’s the same old ‘New Super Mario’ formula that we saw on the original DS and the Wii except now there’s a running coin tally, and if you get to a million coins…well, actually I have no idea what happens but I’m never going to come close to finding out without resorting to looking it up on Youtube.  When I finished playing through NSMB2, the game had my final tally at 10,000 coins.  I get that there are secret levels that I might have missed and speed run modes to try out but judging by that average, I would need to beat the game a hundred times over to pass the million mark.  Screw that.

There’s not a whole lot positive to say about NSMB2 beyond the expected tightness of the controls.  The game is heavily reliant on nostalgia to charm its audience, bringing back the Koopa kids and the Reznor boss stage from Super Mario World.  Only it visits the well about eight times too often.  The Reznor boss stage is repeated as a mid-level boss in every world with almost no variation on how to beat them.  I thought those little rhino guys were neat twenty years ago but lets be honest, they are one of the simplest boss battles in the Super Mario canon.

The stages in the game are passable in their design but largely uninspired.  There are level designs from Super Mario 3, Super Mario World and Super Mario Galaxy that are almost permanently etched in my memory but I’d be hard pressed to describe anything from this game since I’ve finished it.  It revisits all the same motifs – ghost houses, castles, desserts and all – with none of the originality and flair of its forebearers.

This is a short game to play from start to finish but it took me the better part of three weeks to finish because I simply couldn’t muster the will to play for more than half an hour at a time.  ‘Surely this gets better?’ I kept thinking but eventually I’d switch off my 3DS in boredom.  You have seen everything that this game has to offer, many times.  It almost feels like it could be a fan made production that simply reuses the assets from the previous iterations.  And who really wants to feel that from a major Nintendo release?  Let’s be honest: the art style stinks.  It is so bland and vanilla that the fact that they’ve used it for three games now is becoming seriously irksome.

Almost everything tangentially related to the game is bothersome too.  The digital version of New Super Mario Bros 2 costs SEVENTY DOLLARS on the Australian 3DS marketplace, a hearty fuck you from Nintendo to gamers wondering if they are intending on joining everyone else in the 21st century in offering a reasonable, online marketplace.  The game will also be the first Mario game to have paid digital downloadable content too.  This is exactly the type of game that doesn’t need it.

Every company has their ups and downs and Nintendo certainly isn’t immune to dropping the ball from time to time.  One hopes that New Super Mario Bros 2 is a blip on the radar, perhaps caused by their A-grade developers focussing their efforts on the impending Wii U release.  But having such a high profile game deliver such an underwhelming experience means that for Nintendo 3DS users, its now been a disappointingly lengthy dry spell after Mario Kart 7 for the next quality title to arrive.  Let’s hope Phoenix Wright Ace Attorney 5 and Professor Layton aren’t too far away.

Sold out for money

Summary : It's not terrible by any means but its pretty uninspired.