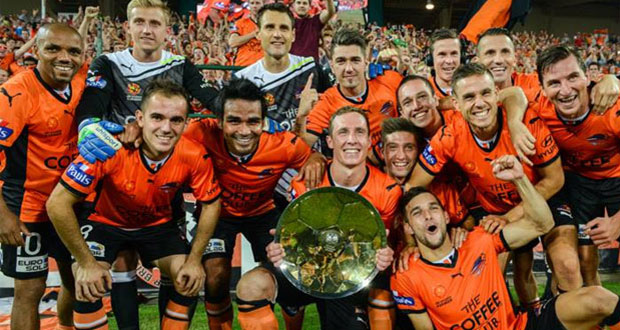 It was first versus second on Saturday night at Suncorp Stadium with a win guaranteeing the Premieres Plate for the Brisbane Roar.

The match was a befitting a contest deciding the first piece of silverware for the season and both teams launched plenty of attacks and counter attacks with both goal keepers standing tall and making some impressive point blank saves.  The game seemed destined to be deadlocked at nil-all when Luke Brattan, our invaluable midfielder who has proved a worthy replacement to Erik Paartalu, fired home the winner from outside the penalty area.  Brattan has started to make a habit out of scoring last minute missiles from that sort of range and his shot proved to be too good for Melbourne Victory keeper Lawrence Thomas who had kept out everything else the Roar had to offer.

The win sent the stadium into raptures and secured a second ever Premiership for the club.  It’s been a dominant season from the Roar, the only club who has managed any real consistency this season.  It’s been a torrid time for the chasing pack and it speaks volumes about the up and down season that some of the contenders have had when you see that Melbourne Victory, who were 2nd on the table at the start of the round, and defending champions Central Coast Mariners, both have negative goal differences despite their position on the table.  Only Western Sydney Wanderers have had anything approaching the form of the Roar and even then, they were never able to capitalize when the Roar had a mini-form slump in the middle of the season.

The Premiere’s Plate is just reward for coach Mike Mulvey who was not necessarily a popular or well liked successor to Rado Vidosic and who took a few months to find his feet with the team.  There can be no doubting his positive influence at the club however.  When he joined, the two time champions were at the bottom of the table in the 2012/13 season and morale at the club was noticeably low.  He cleared out the players who had mentally checked out (Nicholls, Paartalu) and brought the best out of Thomas Broich who was a shadow of his former self under Vidosic.

Although not all his acquisitions have worked out (Stef Niijland), Mulvey made a shrewd signing in Dimi Petratos who was seen at Sydney as a youngster ‘with an attitude problem’ but has flourished at the Roar with four goals and consistent form all season.  He also did well to secure the services of Matt McKay and Liam Miller who have been a fantastic supply channel all season for Broich, Henrique and Berisha. 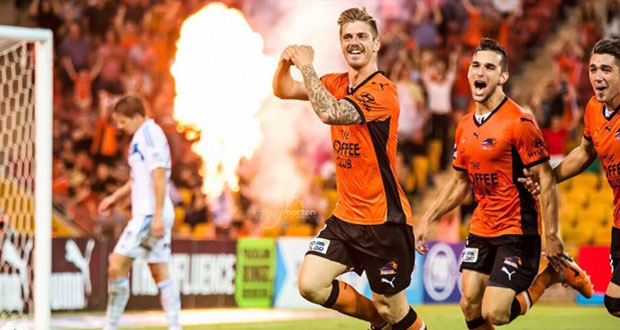 Lastly, Mulvey was also able to leverage the Roar’s impressive youth squad in a way that Rado Vidosic was inexplicably unable to do and this season has seen some shining moments with new stars Matt Acton and Devante Clut.

The nature of Australian sport is such that there is a sudden death final series yet to be played and a Grand Final on May 2nd.  It remains to be seen if the Roar can secure a third championship but regardless, I am thrilled with how they have played this season.  They have played positively, scored goals aplenty and entertained week in, week out.  For all the spectacular goals, the late drama and the great atmosphere, my season membership is worth every penny.

Now there are just three rounds left to play and then its Finals Football time.  I can’t wait.

Previous: South Park: The Stick of Truth
Next: Cosmos: A Space Odyssey