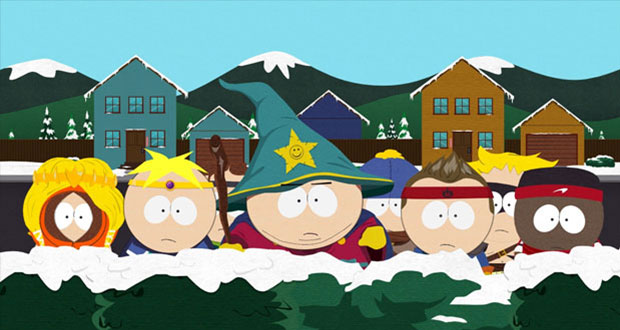 The South Park series is no stranger to video game adaptations.  In the cartoon’s seventeen year history there have been at least five video games including cart racers, tower defense games and a shoot em up.

South Park: Stick of Truth, the first South Park RPG, is the game that fans have been waiting for.  This is a 20 hour experience that allows the player to explore the entire town of South Park (and Canada), interact with virtually every character from the show and partake in what is effectively an interactive movie influenced by the recent “A Song of Ass and Fire” trilogy of episodes.

Although not a direct follow up to that storyline, A Stick of Truth is a fantasy satire in which the kids of South Park divide themselves into two warring factions: The Humans, lead by Cartman and Butters, and The Drow Elves, lead by Kyle and Stan.  Players take the role of a new kid in town who gets christened “Douchebag” and he must pick a side and take part in a series of quests to fight over the possession of the Stick of Truth.  Things gradually become more complicated with the introduction of aliens, the CIA, Canadians, nazi zombies and gnomes.

The gameplay in The Stick of Truth works very similarly to the Mario RPG games where there is turn based combat which involves timing-sensitive button presses to accentuate attacks and block enemy counters.  Like most western RPGs, players get to choose their class of character (warrior, mage, thief or Jew) and customize their appearance, weapons and party members.

On one hand, there is a surprising amount of depth to the game mechanics.  Not only can you modify each weapon and give it unique attacking or healing properties, you also gradually acquire the ability to use alien technology, perform increasingly complicated and powerful farts to remove obstacles and command your allies to do your bidding (such as using Jimmy to access the disabled ramp).  In this sense, there is actually level of complexity to the game mechanics which went above and beyond what I would have expected.  There are parts of the end game that require a careful combination of shrink rays, alien teleportation devices and farts which can actually lead to some unexpectedly tricky puzzles to navigate.

On the other hand, the nuances of the combat are really for naught.  This is one of the most simplistic and shallow combat experiences I’ve ever experienced in an RPG.  Once I identified a certain, effective combination of moves between Douchebag and Kyle about 3 hours into the game, I used them repeatedly to get through the rest of the encounters to overpowering effect.  Although the game tries to mix it up with enemies who are armoured, proficient at blocking ranged or melee moves, really none of this amounts to much and even the most casual RPG fan should be able to plough through the enemies without much fuss.  Not even the bosses put up a decent fight.

So the relative worth of the game is tied almost exclusively to the player’s enjoyment of South Park and its divisive sense of humour.  Personally, this game was an absolute thrill and as a fan of the show who has watched religiously for all seventeen seasons, this game was like manna from heaven.  I reveled in all the obscure bit-part characters that turned up (not just Mr Hanky, but even his children Amber, Simon and Cornwallace) and cherished every reference, call back and in-joke that the game served up.  The script was written in close consultation with Matt Stone and Trey Parker and it shows.  The jokes are as funny as the best material on the show and there are plenty of good gags about RPG tropes (useless audio-logs, mute heroes, needless collectable items) to boot.

The running time of twenty hours, which includes the main quest and all the side quests, is just about perfect for this game so that it doesn’t overstay its welcome.

As a South Park fan, I thoroughly enjoyed the story and its widespread cast of characters.  If I was nitpicking, my biggest gripes with The Stick of Truth is that it doesn’t have any musical numbers and that Mr Garrison is shamefully under-utilized.  On the other hand, the game goes the extra mile and includes material from Team America so it really does feel like an exhaustive compendium dedicated to celebrating Parker and Stone’s full body of work.

At the end of the day, South Park: The Stick of Truth is an excellent template for how to translate a TV show into a quality interactive experience.  Although the gameplay in The Stick of Truth may be very simple, the RPG format lends itself perfectly to giving the cast of the show ample screen time and allowing the creators to showcase the nuances and minutiae of South Park that come from seventeen seasons of material. 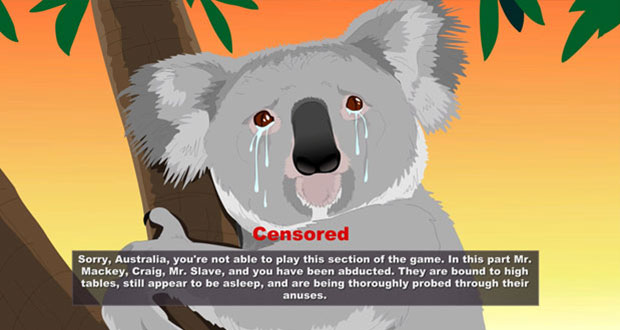 A final word on the Australian version of The Stick of Truth.  There are about four instances during the game where content is censored and the scene cuts away to an image of a weeping koala as a line of text explains what has been removed.  From what I can tell, they are related to scenes in which aliens from outer space anally probe Randy Marsh.

Considering the content that has made it into this game, the censorship decision makes the Australian Classification Board look ridiculous.  How exactly does someone determine that a game with an R-18 rating has suitable content in the form of: crack pipes, bongs, drug use, scrotums, penises, abortions and an entire level walking inside Mr Slave’s anus which contains semen covered sex toys and small animals.  That’s okay.  But a sequence in which a cartoon alien sticks a machine into Randy’s butt is unfit for Australian eyes?  Who thinks this stuff up?  How does one determine whats okay and whats not?

I am a believer in a ratings system and limited forms of censorship.  I think its perfectly reasonable to take steps to help parents find out about the content of video games and films so they know what their children could be seeing or playing.  What I don’t support or understand is needless censorship that makes a mockery of that process and suggests that arbitrary adherence to rules are being followed without any consideration whatsoever towards context or intent.  Get your shit together, Australian Classification Board.

A Song Of Ass and Fire

Summary : The best video game adaptation of the South Park license and happily, after all the delays and a changer in publisher, the game has been worth the wait.