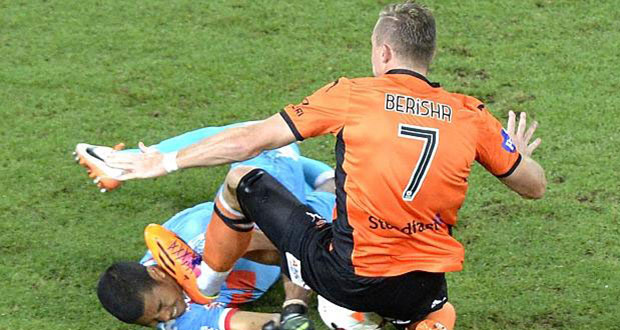 There’s no denying that since he joined the A-League three seasons ago, Besart Berisha has been a divisive, hot headed player who always pushed the limits with referees and was no stranger to trouble.  And yet for two seasons, he managed to steer clear of seeing a red card.  In fact, a fun little piece of trivia about the Roar once upon a time was that Berisha improbably never saw red and yet comparatively mild mannered players Henrique and Thomas Broich had both been sent off in their A-League careers.

That all changed this season.  A combination of injury and suspension has severely hampered Besart Berisha’s year.  He’s still been good value in the short time he’s played.  He’s netted eleven goals in sixteen games which would easily be the best goals to game ratio of any first choice striker in the league.  And yet on Friday night in Suncorp, in his first game back from a red card suspension, Berisha went into the history books by becoming the first player to get sent off three times in a single season.  It was an unfortunate challenge.  A through ball saw Berisha and Perth Glory keeper Tando Velaphi in a foot race and Berisha’s sliding challenge saw his boot ride up over the ball and kick Velaphi flush in the throat.

Was the red card justified?  Possibly.  Was there malicious intent from Berisha?  Certainly not.  It was just an unfortunate moment that compounded Berisha’s challenging final season for the Roar.  At his best, he has been as good as he ever was, scoring goals at ease.  Unfortunately, his wayward onfield behavior and nagging injuries have meant that he has played just half of the season.  And as the Roar look to consolidate and get some stability leading into the finals, they will have to try and slot in Berisha who has had a far from ideal lead up and seems to be in a questionable head space.

As for the rest of the team, the Roar showed great character once again and pulled off what I believe is their fourth come from behind victory in the season, dominating the chances and possession despite being a man down.  The indomitable Henrique came on and duly played the part of super sub, scoring from outside the penalty area with no less than four defenders in front of him.

Brisbane Roar have been the most consistent team in the competition and are rightly favourites heading into the finals.  The X-factor of course is Besart Berisha and what he will do when he returns.  I don’t think even he knows whats in store.