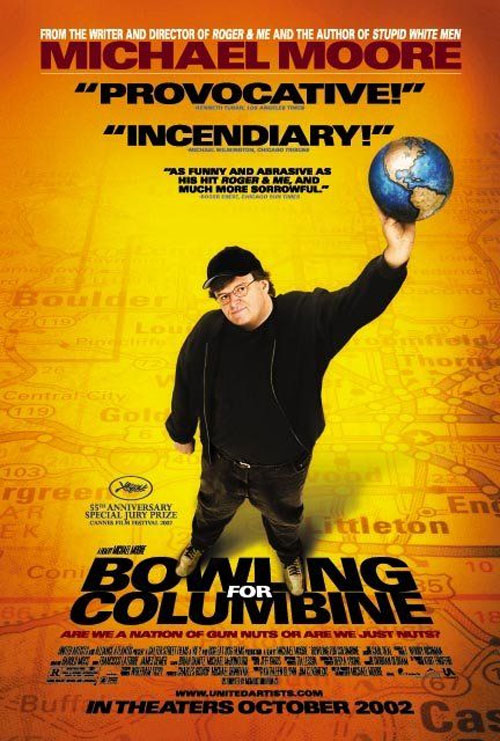 Bowling For Columbine examines the gun-culture in America and attempts to explain why the homicide rate in the country is so high.  Moore has obviously given this plenty of thought and instead of proposing the easy accessibility of guns, he points to culture of fear instilled by the media and makes comparison to Canada which, when the population difference is accounted for, has a quarter of the rate of gun-related deaths America has.

The film spans the last four years and touches on the Columbine high school massacre, the six year old boy who shot a girl and briefly examines the World Trade Center tragedy.  You get interviews with Marilyn Manson, Matt Stone (half of the creators of South Park who went to the Columbine High School) as well as the brother of one of the people involved in the Oklahoma bombing, Canadians and famously, Charlton Heston, the president of the NRA.

Given the topic and considering that the film is two hours in length, Moore eases the viewing experience by adding a liberal dosage of humour.  Unfortunately, I feel that a lot of this actually detracts from the merits of a documentary which shouldn’t have to tell you what conclusions should be drawn, but let you think over it and decide for yourself.  A lot of people I’ve talked to who have seen this film happily dismiss all Americans as being a bunch of idiots, the way Moore portrays them.  Any pro-gun supporter Moore talks to is made out to be an incoherent, bumbling lunatic.  The pro-gun lobbyists are never really given a chance to present their side of the story.  They are simply made fun of, for comic relief.

In a bizarre attempt to put forward his argument that Canadians are completely passive and law abiding, Moore goes from house to house in Canada and finds that they are all unlocked (because they are so secure in their neighborhood).  Give me a break!  Even if this was the case and the houses selected weren’t rigged, some of the house-owners admit to being robbed and keep in mind, the homicide rate is a quarter of Americas.  That’s still the equivalent of 3,000 people being shot up annually so Canada is far from being a pacifists paradise (Moore conveniently neglects to mention the population difference).

Of course, Moore’s heavy handedly trying to influence your opinion is really unnecessary.  At least as much as it pertains to the NRA.  In the documentary’s closing chapter, Charlton Heston is shown up as a completely vile, broken down and pathetic old man.  Yet again though, Moore goes over the top by placing a photo of the girl that was killed by the six year old boy outside his house.  Moore plays the sympathy card even when he doesn’t have to.  You know Charlton Heston is morally in the wrong without having to add villainous music or pulling cheesy stunts like that.  Somewhere amongst the gimmickry, Michael Moore has made an important and worthwhile documentary with an important message.  Yet he also claims to be a proponent of making films that target intelligent people and not the lowest common denominator.  So why, then, does he keep having to spell out the bottom line and tell you what to think with such a heavy hand?

Summary : An attention-grabbing and highly controversial documentary. I agree with the message but can't look past the factual errors and misleading direction. 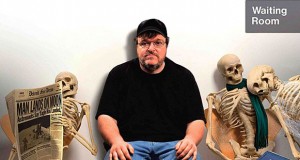