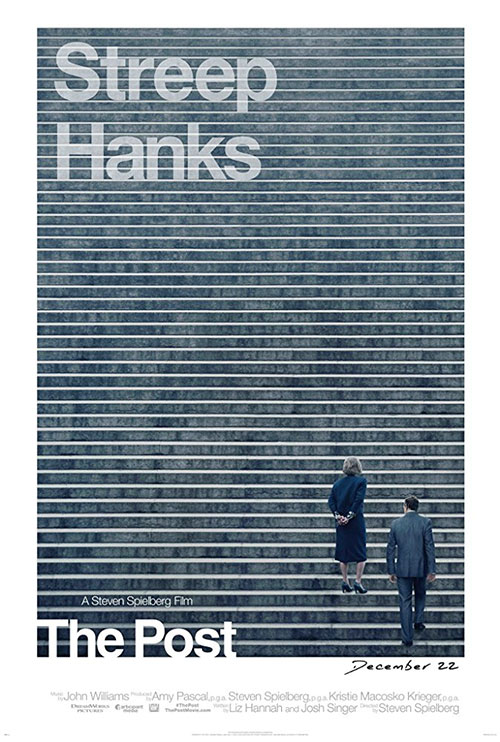 One of my favourite passages in Roger Ebert’s memoir Life, Itself is when he describes his time as a journalist working a beat for the Chicago Sun Times in the Sixties and Seventies.  These newspapermen were chain-smokers, heavy drinkers and they lived and breathed their jobs.

During the day they’d pound the pavement, sniffing out stories, searching for scoops and racing against their competitors at the Tribune for that all important exclusive.  Once they filed their stories, it was off to the pub for an all night bender with their colleagues until the sun would rise at which point they’d do it all again.

I was fascinated by Ebert’s description of these people, their work environment and the pride they took in delivering news to the public.

Steven Spielberg’s The Post is a film set in that time (specifically during the Nixon administration), and although Ben Bradlee and Katharine Graham aren’t as whisky-soaked as Ebert was in his heyday, it still does a fantastic job giving us an insight into an era of print media that is virtually unrecognizable compared to what it is today.

Katharine Graham (played by Meryl Streep) has just taken over as the owner of the Washington Post after the deaths of both her father and her husband.  Until very recently, she had lived the life of a socialite, brushing shoulders with many of the political elite in D.C, including Secretary of State Robert MacNamara.  Her primary responsibility as the new head of the Post is to oversea the transition of the paper from being a family-owned operation to a publicly floated company.  We’re told this transition involves a cooling off period where Katharine can’t be seen to do anything drastic that would destabilize the business.  Anything construed as a breach of that clause would jeopardize the sale of the paper.

As luck would have it, a civilian military contractor is shopping around classified documents with damning evidence that showed that three presidential administrations from Kennedy to LBJ knew that the Vietnam War was a doomed endeavor but pursued it anyway because (wait for it) it was a matter of pride.  Thousands of young lives lost because they didn’t want to look bad.

This information is literally dropped into the laps of the Washington Post by an anonymous courier.  Chief Editor Ben Bradlee (played by Hanks) wants to run the story and inform the public of this mass deception by the American government.  Graham’s associates who are facilitating the transition of the Post’s IPO, are terrified of running something so inflammatory about the White House.  Especially as the Nixon Administration has successfully had a court injunction issued against the New York Times for publishing similar material.  This is Graham’s dilemma.  Does she run the story and risk the collapse of the newspaper which has been in the family for generations?  If she doesn’t, what purpose does the paper even serve if not to keep the public informed?

Naturally, the audience knows what Graham decides to do.  This is a film about appreciating the journey, because we know where the final destination is.  It’s about enjoying Streep’s performance as she agonizes over her choice and the ramifications of that decision.  It’s about seeing the intricate details involved in putting together a major metropolitan newspaper when a story gets the green light.  And there’s plenty of fun to be had in absorbing the hairstyles, the technology and the language of D.C in the Seventies.

Of course, its impossible to watch the film and not draw parallels with American news media today.  There are the obvious connections to make with the attitudes of both Richard Nixon and the current occupant in the White House towards the national news media.

Also, when Katharine Graham struggles with her conscience to hold her friend Robert MacNamara accountable as a politician, it also makes me think about journalists working at The Post today, and how they would cover stories about Jeff Bezos (the current owner of The Post) and Amazon.

The Post would make a fine companion piece to the excellent Spotlight which came out a couple of years back and covered the newspaper men and women working at the Boston Globe.  By chance, the two are interconnected via their chief editor.  Marty Baron who was the editor at the Globe when the Spotlight team published the articles about the Catholic church oversees The Post today.

Although a relatively low-key affair, I liked The Post and found it to be both a timely and thought provoking film.  I continue to appreciate this stage of Spielberg’s career as he produces small scale dramas such as this and Bridge of Spies.  They are superbly crafted and worth a watch.

A cover-up that spanned four U.S. Presidents pushed the country’s first female newspaper publisher and a hard-driving editor to join an unprecedented battle between the press and the government.

Summary : Spielberg continues his rich vein of form in recent years. The Post is a fine film about the importance of political journalism and its responsibility to the public.