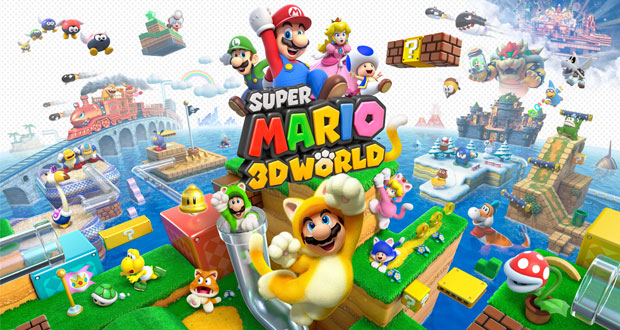 Looking back now, its hard to remember that there was a time when Nintendo would wait four or five years between mainline Super Mario game releases.  Super Mario World was released in 1991.  Mario 64 arrived five years later in 1996.  That was followed up by Super Mario Sunshine in 2002.  New Super Mario Bros was launched on the Nintendo DS in 2006.  After that, the production cycle ramped up significantly.

In the last eight years, Nintendo have pumped out a new 2D or 3D platformer for their iconic mascot at a rate of nearly one a year and there is now not one, but three different series that are being iterated on concurrently.  There’s ‘New’ which are the two dimensional games that are steeped in retro appeal, ‘Galaxy’ which is the magnificent pair of 3D planet-hopping games that graced the Wii and finally there’s ‘3D’.  The first installment was Super Mario 3D Land on the Nintendo 3DS and the latest iteration is Super Mario 3D World on the Wii U.

The 3D games are an intriguing blend of traditional and contemporary game design.  The grassy platforms and clear blue skies are certainly evocative of the 2D classics that graced the original Nintendo system but each stage unfolds in a 3D environment as the name would suggest and the design is generally more creative than the ‘New’ games.  Nintendo EAD Tokyo certainly aren’t shy about adding new power ups, characters and level concepts into the mix.  Mario games might be a dime a dozen these days but when the games are as inventive as 3D World, that is no bad thing.

Where to start?  Each stage is wide and expansive and with good reason.  The game has been designed to be played with up to four players.  Sadly, with the dismal sales and general unpopularity that the Wii U is experiencing, I think few people will get to experience this mode.  I had a chance to play four player mode at the Penny Arcade Expo in Melbourne and even though I was playing alongside strangers, it was good, chaotic fun.  It was certainly a more forgiving experience than multi-player in New Super Mario Bros which invariably devolves into a contest to see who can troll their team mate in the worst way possible.

Although the levels are wide enough to accommodate four players, they are also versatile enough that if you’re going it alone, the levels are still enjoyable.  I will say that the game leaves it much later than the more recent Mario games to ramp up the difficulty level.  Instead of being a challenge to reach the end of a stage, the game’s focus is more about exploring and being a completionist.  Even if you finish every stage in a world, you cannot progress and unlock the final castle unless you have collected a sufficient number of stars. 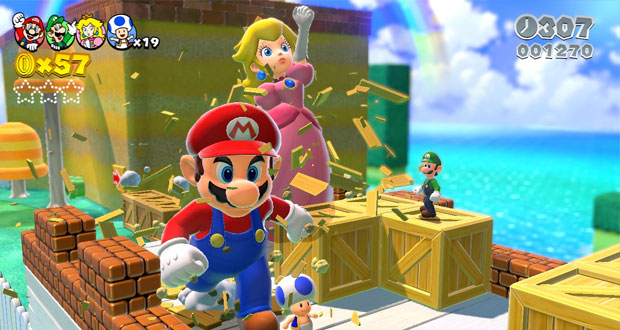 Lets talk power ups.  The most prominently advertised new power up is the delightful catsuit.  The catsuit allows the player to dash on all fours, do a swipe attach with their paw and most importantly, scamper up walls and objects.  As you can imagine, there’s plenty of verticality to the stages in Super Mario 3D World and the suit is a great power up for ramping up both mobility and exploration.  But there’s more.  The boomerang costume is a neat new variant on the fireball outfit that allows the player to fire a projectile at enemies.  As you’d expect, not only do you have a chance of knocking out enemies once but when the boomerang comes back, you get a second bite at the cherry.

Speaking of cherries, an unexpected surprise in the game is how fun the new cherry power up is.  Once activated, it creates a clone of the player and follows them on the course.  Nintendo have cleverly exploited the potential for fun with this power up by stacking multiple cherries in a single stage so conceivably, the player can end up running around with up to 3 clones of themselves.  What usually occurs in these stages is some sort of meta-game where you have to try and keep all of them alive.  Some of my favourite stages in this game involved the cherry power up. 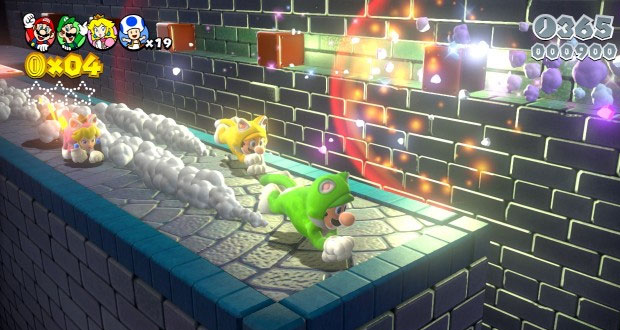 On another note, it bears repeating just how great the game looks and what a welcome thing it is to see Nintendo titles in resplendent high definition, full of colour and with a rock solid frame rate to boot.  The graphical fidelity on the Wii U is a marked improvement over the Wii and there are plenty of little touches – facial animations, plumes of smoke trails behind running players – that look absolutely terrific and give the game oodles of charm and character.  Each world is full of colour and imagination and some of the later stages, particularly Bowser’s Casino, are absolutely stunning in their presentation.

Super Mario 3D World looks great and it plays great.  Which makes it all the more of a shame then that this game probably won’t reach the audience that it deserves.  Super Mario 3D World is a fine addition to the Wii U software library and although its not the successor to the Galaxy games that some fans would have hoped for, there is plenty to admire and enjoy here.

A purrfect new Super Mario platform game for the Wii U

Summary : With the saturation of Mario games in recent years, the gloss and specialness of each version ebbs away. Still, for every disappointment like New Super Mario Bros 2, there's a gem like Super Mario 3D World. Vivid graphics, creative new power ups and pixel perfect platforming.