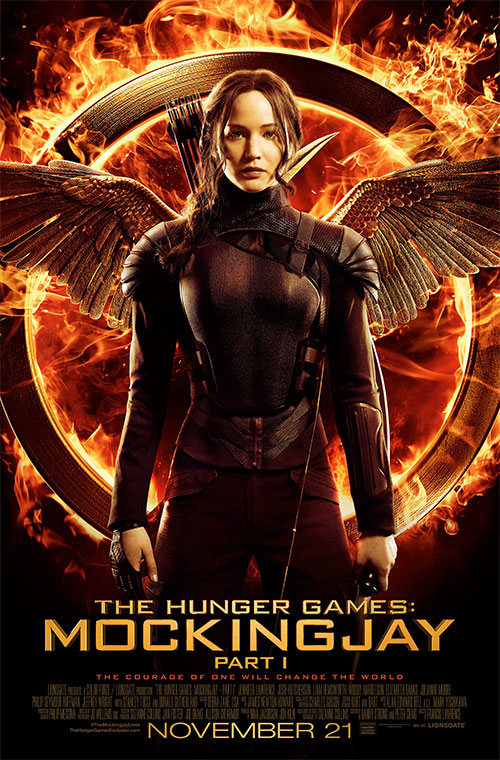 Like everyone else, I’m not totally sold on the recent trend of turning film trilogies into quadrilogies with the last instalment being broken up into two parts.  The experiment must have paid off handsomely at the box office for Warner Bros when they split Harry Potter and The Deathly Hallows into two films and now every man and their dog is doing it and here we are with The Hunger Games: Mockingjay – Part One.

THG:MP1 is half of the final chapter in the Suzanne Collins series which most fans of the books I know assure me is the worst of the series.  I went in with tempered expectations.

The film picks up shortly after the events of Catching Fire where our hero Katniss Everdeen is picked up by the stupendously named Plutarch Heavensbee (played by the late Phillip Seymour Hoffman).  I assume everyone involved with the film thinks the name is as ridiculously silly as I do because no one ever refers to PSH by name.  Anyway, Heavensbee takes Katniss to District 13 where the populace have sought shelter in a massive underground bunker and are lead by President Alma Coin (Julianne Moore), a cold and stoic military leader who brooks no nonsense and is methodical and single minded in her aspirations to unseat President Snow from power in The Capitol.  Throughout the film is she called upon to make strategic choices – like whether a rescue team should abort a mission or potentially die trying to finish it – and she barely flinches.

Its easy to sneer and be cynical at a film series that cashes in on the popularity of a Young Adult book series post-Twilight but I have always been pleasantly surprised and admired The Hunger Games series for attempting to explore a number of different themes to contextualize the violence that is at the heart of the storyline.  The Hunger Games and Catching Fire both looked at women in the media, how they are scrutinized for their appearance and behavior on a different level to men as well as the influence of reality television in shaping societal values and norms.  Katniss’ stylist Effie is often used for comic relief but in the second film Catching Fire, Snow’s primary concern with Katniss is not that she won the games but how she is perceived by the public as a result.  Her appearance, her relationship with Peeta and her behavior in public are all pivotal to determining whether she is a figurehead for the Capitol or a leader of the rebellion.

Mockingjay doesn’t tread the same ground and instead, rather unexpectedly, it delves head long into a critique of war propaganda…from the perspective of the rebels. 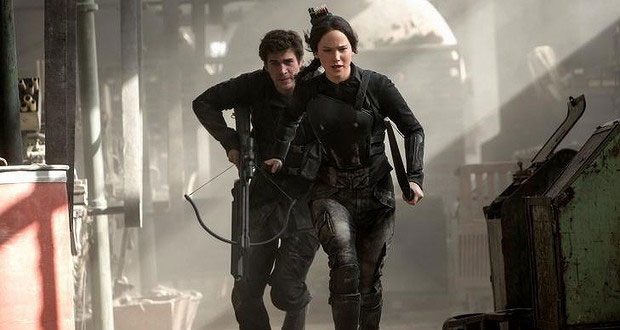 Is this what everyone else expected?  Because I didn’t see this coming at all.  Heavensbee and Coin don’t particularly find much value in Everdeen as a military weapon to battle Snow’s forces.  After all, she’s just one person.  Instead they use her to make propaganda films to convince the downtrodden in other districts to participate in suicide missions.  And they do this by filming Katniss at the scene of drone strikes that wipe out hospitals.  Is this seriously an American drones/Palestine parable in my Young Adult action movie?  Can you imagine anything like this in Star Wars or Lord of the Rings?  We never question whether Luke Skywalker will form a constitutional democracy when he unseats the Empire and we don’t wonder whether Aragorn is needlessly allowing the people of Isengard to be used as cannon fodder when he could be engaging Saruman in a diplomatic peace treaty.  But in Mockingjay, we see a surprisingly cold and cynical lens cast on President Coin and how she uses the people of District 13.  She whips them up into a frenzy at her rallies.  She never forms a bond with Katniss and sees her as a tool to be exploitd.  These are shades of grey that I didn’t really expect in the story.  Whether they lead to anything in the final film is anyone’s guess (well…at least for those of us who didn’t read the books).

The love triangle is still a thing.  Sort of.  I think in everyone’s eyes, the milquetoast Peeta is surely Katniss’ second choice compared to best friend Gale who is a stronger, assertive and a more believable equal to Katniss and her world-conquering feats.  Poor old Peeta’s loyalty to Katniss is pushed to the limit in Mockingjay as he is captured by the Capitol and we suspect he is tortured and brutalized for most of the film.  There is a scene near the end of the film involving Peeta which made me jump out of my seat and the sheer brutality of the scene (bug eyes, burst blood vessels) made me wince and squirm.  There are definitely moments in Mockingjay where the film pushes the envelope with its M-Rating.

I think its impossible to talk about Mockingjay and not make mention of what a superb job Jennifer Lawrence does once again as the lead.  Under a lesser talent, this series would not be nearly as successful in drawing in fans from outside the target demographic.  Ultimately, The Hunger Games trilogy is a B-movie storyline that’s been elevated by an A-list performer.  You only need to watch Divergent to see how a similarly ambitious project can fall flat when the star isn’t able to make the material work.

Ultimately, there was enough going on in Mockingjay that kept me engrossed in the proceedings and fascinated by the dark and unexpected turns the film took.  Having said it, it definitely doesn’t follow a conventional narrative arc and is most definitely feels like watching half of a four hour film which is exactly what this is.  I don’t much care for this Part One and Part Two business.  I think the original Lord of the Rings trilogy got it right with the 3 hour cinematic releases and the Extended Edition for the diehards on DVD.  Mockingjay has some of the most interesting themes in the series so far but it is also the least successful as a stand alone film in its own right.  Three films down and one to go.  Lets see if Jennifer Lawrence and the rest of the cast and crew can stick the landing.

The penultimate chapter in The Hunger Games series is dark, gloomy and occasionally surprising

Summary : Its the weakest chapter in the series to date, certainly when judged on its merits as a stand alone film, but it sets things up nicely for a barnstorming finale.

Previous: The Five Year Odyssey Is Complete
Next: Interstellar