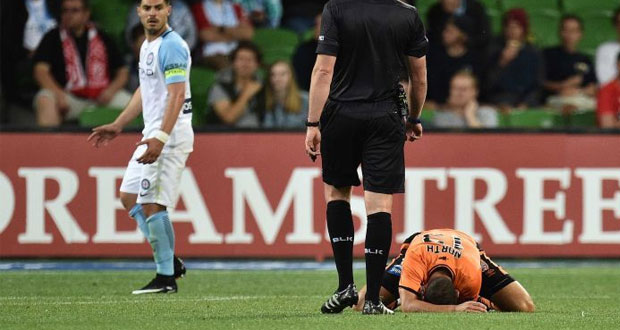 Another week another draw for Brisbane Roar.  This time away to Melbourne City.

It was a record tying fourth consecutive draw for the club.  The story remains largely the same.  The Roar have generally looked positive against some of the competition’s biggest rivals in recent weeks (Sydney FC, Western Sydney Wanderers etc) but a lack of killer instinct in front of goal has meant that they have been unable to put away their opposition for good.

The match against City, who had just won their first ever trophy in a mid-week FFA Cup final over Sydney FC, produced one of the major talking points of the round when City scored their equalising goal.  In the lead up play, striker Bruno Fornaroli laid his hands on Roar defender Jade North’s face who theatrically hit the deck as though he had been struck.  Players on both sides appeared to come to stand still momentarily before City resumed play and scored an equalizer.

It’s disappointing to see diving becoming more prominent in the league this season.  For his part, Jade North apologised to both his fellow players and the fans for his actions after the game.  Ironically, one of the most egregious instances of diving actually came from a City player earlier in the season – Neil Kilkenny.

Never one to miss an opportunity to knock the sport, in the week after the game, the national broadsheet The Australian, ran an editorial titled “A-League dogged by diving scourge that shows no sign of slowing”.  The main conceit of the article was that diving was considered ‘anti-Australian’ because culturally as a country we don’t like gamesmanship or cheating.  This was yet another classic case of old media in the country peddling an anti-football story.  The Murdoch press likes to run the narrative that soccer is a ‘foreign’ sport that doesn’t mesh with ‘Australian values’.  The notion that soccer can’t or shouldn’t win the hearts and minds of Australians because they equate diving to cheating conveniently ignores the fact that the national cricket team stays at the crease until given out, even if they know they’ve nicked the ball.  Likewise the litmus test of whether the prevalence of cheating makes a sport ‘unAustralian’ also ignores the rampant salary cap cheating and team-wide drug abuse that has plagued AFL and NRL in recent years.