Tomorrow’s sunrise will cue the opening of the polls for Britain’s general election.

Traditionally, British politics is never very interesting, the same two parties have been jostling for power since the end of the war and only the farcically comedic bickering in the weekly televised ‘Prime ministers Questions’ makes it interesting. But this year something is different.

In an election dominated by smear tactics, the promotion of a third party and for the first-time three televised leader debates – couple that with the Obama-sensation and the global recession – things have definitely been shaken up.

Lets have a looksie at the candidates: 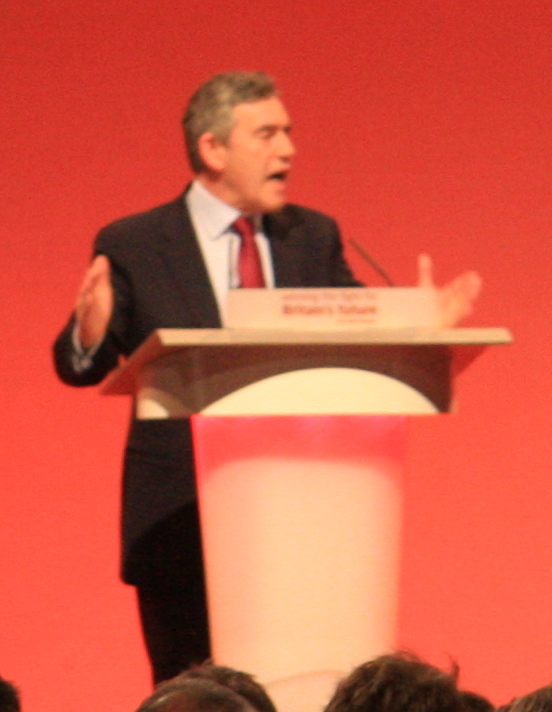 This is my second election – Strangely, it is the current Prime Minster’s first. Confused?

The UK system ensures that the public vote for a political party rather than for a candidate (like they do in America). Therefore in the last election the Labour candidate was Tony Blair and with him succeeding power a year after the election, the current PM, Gordon Brown, has held the top position since then.

At first Mr. Brown had an excellent approval rating but, as it so often does in politics, things caught up with him.

Having been the ‘big cheese’ during the biggest recession in the post-war period, and during an increasingly unpopular war in Afghanistan, and whilst hundreds of MPs were abusing their expenses, Brown has his fair share of critics. Almost the opposite of Obama’s smooth TV-friendly manner, Brown comes across as harsh and at times short tempered, as shown recently in an event which the media eagerly named ‘bigot-gate‘.

The media had him in last place after his performances in the televised debates, but for me I don’t care if Gordon isn’t pleasing on the eye or a man of the people, what does matter is the Labour party’s policies. Personally I believe that the PM came across as the only statesman in the room. He has been in the position for four years and is fully aware of what it takes to run the country – you cannot say the same for the other pretenders.

Hailed by the leaders of the G20 last year as the saviour of the economy, Mr. Brown’s final comments were to remind everyone that we are not voting for a TV personality, we are voting for a government that will run the country.

The Tory party candidate has been leading the polls for several months and  has long been the favourite to win the election, but my word have they tried hard to screw it up. A couple of months ago it looked like a foregone conclusion, but somehow the conservatives have let the others back into the race.

The suave Cameron became the leader of the opposition on a wave of enthusiasm. A youthful and modern approach to inspire the party after three consecutive election defeats. However, it is his slickness and media try-hard approach that have put many voters off him. Do people really want another Eton and Oxford educated former PR man as their new PM?

The party claims that the best way out of the recession is to impose further cuts across the sectors. This may not seem like the best election strategy, but they conservatives claim that they are going to make the tough decisions early and reap the rewards later on.

Who? – That would’ve been the answer given by a large part of the country before the first debate three weeks ago.

The period since then has been remarkable. Dubbed ‘Cleggmania’ by the national press, the success of Clegg during the debate exploded the election into life. Traditionally the ‘also ran’ political party, the Lib Dems have seen a rocketing success over the last few weeks and many polls have them as the second most popular party in the country.

Young, good looking and seemingly sincere, Nick Clegg has had a political impact on this island that is unparalleled in recent times. Such is the unexpectedness of the voting attitude, the election runs the risk of becoming a one concept election – electoral reform.

Despite reports suggesting the Lib Dems polling 30% of the votes, due to the current electoral system the party would still be under represented in parliament. Therefore the party’s may dangle their votes to the other parties, in return for pushing through the reform the entire electoral process to a Proportional Representative system.

This causes a headache for the other parties as with the number of parliamentary seats won by the Lib Dems, the winning party runs the chance of not having enough seats in parliament to secure a majority – thus leading to a ‘hung parliament’.

Should the election result in a hung parliament, it would mean that for a bill to be passed it would need a cross party consensus. With that unlikely to happen between the reds and blues, it is advantage yellows.

What ever way you vote, the election is the time to use our voice.