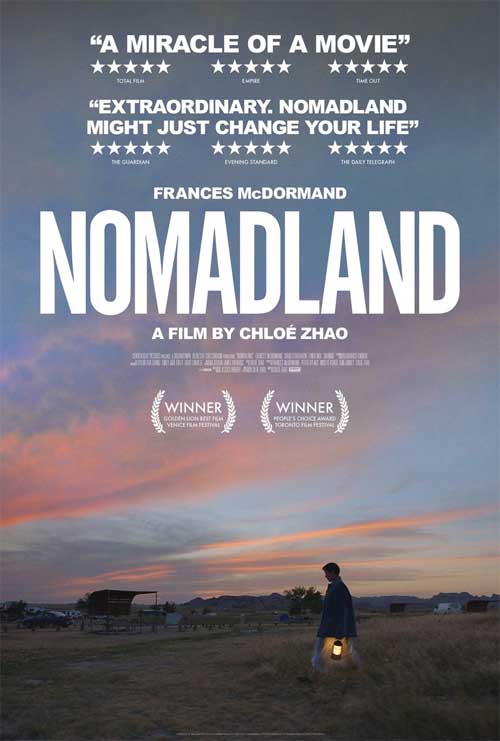 When the gypsum plant shut down in Empire, Nevada, it took the town with it.  Literally.  Once it became clear the jobs weren’t coming back to this tiny town built around industry, everything fell into ruin and within six months Empire’s zip code was discontinued.  Not long after, Fern’s husband got sick and passed away.

With nothing left to keep her in Empire, Fern decides to live out of her van and hit the road.  She can always find seasonal work at the Amazon processing plant.  But life on the road carries a steep learning curve.  Make sure you have enough gas to reach the next town.  Ensure access to clean water.  Find ways to keep warm in the unforgiving winter.

Fern’s friend Linda invites to her a rendezvous of nomads in the Arizona desert, organized by Bob Wells (a genuine vandweller playing as himself).  Although initially reluctant, Fern ultimately decides to go and that’s where she meets a tribe of likeminded people.  She learns from others how to live on the road and discovers there are a multitude of reasons why people became nomads.  She befriends Swankie, a middle aged woman with a terminal illness.  Rather than wasting away in a hospital, Swankie wants to see out her days travelling the country and seeing natural wonders.

Fern has an amiable personality and makes a few friends at the rendezvous.  They all have a saying.  “See you down the road.”  And with that, they part ways. 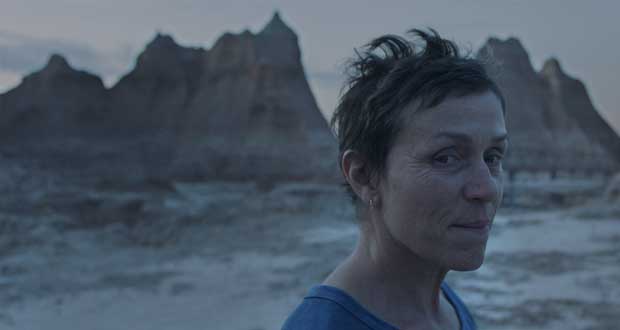 A lot of my awareness of the unique type of poverty that exists in America (historically the wealthiest country in human existence) is thanks to Washington Post journalist Barbara Ehrenreich’s excellent book Nickel and Dimed, which is dedicated to covering the lives of American’s working minimum wage jobs.  In it, I learned a quarter of America’s homeless are fully employed.  That trailer parks, often synonymous with housing for the poor in America, are becoming increasingly unaffordable for people earning the minimum wage.  For people like Fern working jobs in the Amazon warehouses, earning $15,000 a year, life is a precarious balancing act and a single unexpected turn – serious illness, or in Fern’s case, an issue with her van – can have dire consequences.

Throughout Nomadland, we see Fern put on a brave face and try to navigate appalling choices – like choosing to spend her last few dollars on heating or food – and find another paying gig in the next town over.  Along the way she makes friends and acquaintances that slip in and out of her life on the road.  An unexpected financial bind has her visiting her sister for help but she doesn’t stay for long.

Nomadland is an incredible film and it warmly deserves the plaudits it has received.  Director Chloe Zhao has done an incredible job writing and directing this character study of displaced people.  It is unflinching in showing the hardships faced by Fern and the nomads, but it never delves into poverty-porn.  A lesser film would try to present Fern’s life as a problem to be solved, with good guys and bad guys along the way.  Zhao’s portrayal of Fern and the people she meets are free of any such judgment.  They are real, believable people with their own hopes, dreams, quirks and idiosyncrasies.  Zhao has infused the film with a poetic, dreamlike quality as she juxtaposes their lives against the striking backdrop of South Dakota’s Badlands Park and northern California landscape.

This is an acting masterclass from Frances McDormand who delivers a formidable career-best performance as Fern.  Fern is an incredibly well rounded and complex character.  She is strong, resilient and resourceful.  She has a kindness that allows her to connect quickly with strangers.  But the weariness of life and the loneliness of being a widow is also etched in her face and body language.  McDormand communicates much of this through small, subtle gestures and expressions.

Its sobering to watch this film and think how it reflects a version of reality that nearly forty million Americans face, living below the poverty line.  It is estimated a further eight million were pulled into poverty last year because of the economic effects of Covid-19.  Progress is slow.  There are politicians who seem openly hostile to impoverished people.  The more compassionate ones seem too few in number, stymied and unable to pass critical legislation to deliver improved wages and access to affordable healthcare.  Nomadland memorably and evocatively captures the lives of those left behind.

After losing everything in the Great Recession, a woman embarks on a journey through the American West, living as a van-dwelling modern-day nomad.

Summary : A subtle, sombre and exquisitely made drama about displaced Americans highlighted by an incredible lead performance from Frances McDormand.