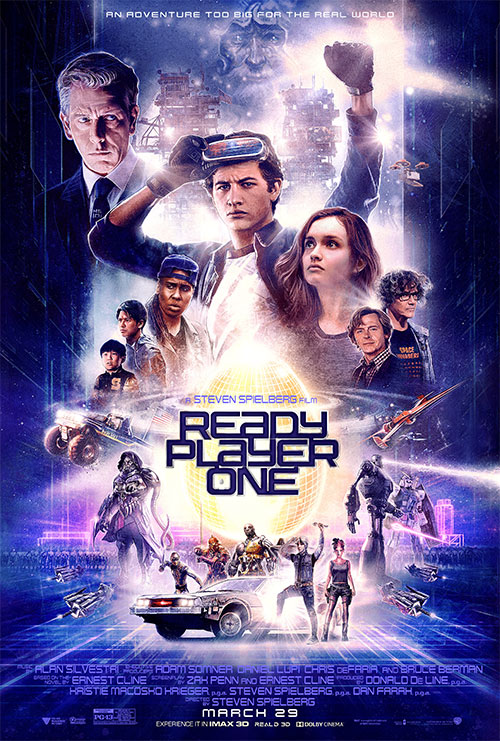 In fact, people are so keen to escape reality that when a Mark Zuckerberg-esque tech mogul creates a world of infinite possibilities that you can experience via Virtual Reality goggles, most people choose to check out of their daily existence and simply spend every waking moment in the Oasis.

This is the premise for Ready Player One, which was originally a novel by Ernest Cline which he has now adapted into a screenplay which has been directed by Steven Spielberg.

The hero of the story is Wade Watts, a nerdy boy who is obsessed with James Halliday, the late founder of the Oasis.  When Halliday dies he sends a message to the world announcing an easter egg hunt in the Oasis with the prize being nothing less than ownership of the Oasis technology and the company itself.  Watts’ avatar in the Oasis is known as Parzival and in this world he and his virtual buddies race to find the next clue in Halliday’s competition as they battle against the nefarious IOI Corporation. 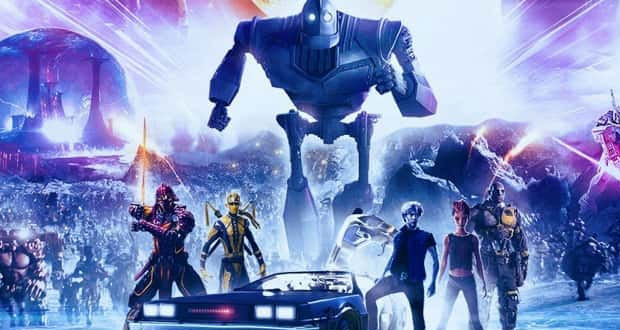 I never really quite clicked with Ready Player One when I read it a couple of years ago.  The pop culture minutiae that Watts obsesses over made him a cringey and awkward protagonist and I was never sure if the author was mocking him or if I completely misread the tone of his writing.  After all, he’s asking the reader to get excited about the nerd in school that tries to recite the whole of Monty Python and the Holy Grail at girls.

Spielberg’s interpretation of the story is to play it with a straight face.  Parzival is a genuine hero and he’s supposed to be un-ironically cool.  The film drops the Eighties-centric pop culture references from the book and broadens the scope so there’s Overwatch characters, Street Fighter‘s Chun Li and whoever else they could get under the Warner Bros licensing banner to turn up.

It was when Parzival sincerely utters the film’s most infamous line – “a fanboy knows a hater” – that I finally understood Ready Player One.  This is a movie intended for kids.  There isn’t any grand message about internet culture.  It’s not about the dangers of virtual reality and how we need to stop looking at our phones less.  Ready Player One is an adventure movie for young kids.

Unfortunately, I think the adults involved with this production won’t connect with the kids nearly as well as they might hope.  Tastes and trends come and go at a rapid rate in this day and age but I feel bad for anyone peddling a “video game” movie story to kids that doesn’t have a single mention of Minecraft or Fortnite.

When the creator of a virtual reality world called the OASIS dies, he releases a video in which he challenges all OASIS users to find his Easter Egg, which will give the finder his fortune.

Summary : Ready Player One feels like a movie from a bygone era, with a view of pop culture and video games ripped straight from the Eighties. 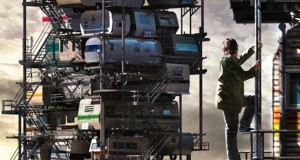