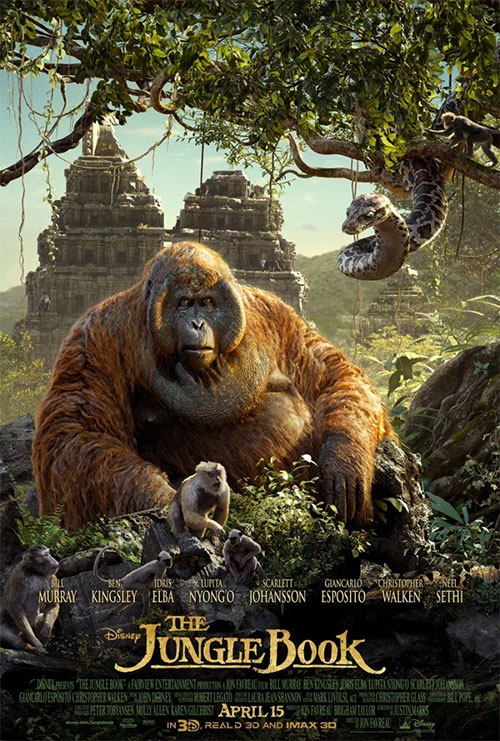 Johnny Depp’s Alice In Wonderland (2010) was not a film that left much of an impression on me but clearly its box office performance delighted the bean counters at Disney who subsequently bank rolled not one but nine live action remakes of Disney animated classics off the back of Alice In Wonderland’s success.

The Jungle Book is the third live action remake they’ve produced and it is by far the pick of the bunch so far.

Right from the outset the film manages to establish a vivid and attractive visual identity.  Mowgli (Neel Sethi) is the only human character in a film otherwise populated with talking animals.  Straight from the opening credits, the audience is thrown into the deep end with The Jungle Book’s animal kingdom and asks them to go along with a world where all creatures can converse with one another and there are established social laws (for instance the drinking pool is an area of truce where they cannot attack one another).

The Jungle Book melds state-of-the-art imagery and a sense of whimsy inspired by the original 1967 film with attractive results.  Typically, the undoing of films so heavily reliant on computer effects is a sense of weightlessness where interactions between characters and their environment lack a sense of tactile ‘oomph’.  The Jungle Book doesn’t have any such problems.  Whether its Shere Khan lashing out with his claws, Bagheera cautiously prowling through foliage or Mowgli and Baloo playfully splashing water at one another, the film has an incredible presence and sense of place, despite the virtual and fantastical nature of its setting.

When recreating such beloved and well established Disney films, there’s a delicate balancing act between paying homage to the original and striking out and making the film your own.  I think Jon Favreau just about nails that balance.  The classic musical numbers from the original film pop up in this new adaptation but the film also develops some characters like King Louie into something quite different.

At the centre of The Jungle Book is newcomer Neel Sethi who is perfect as the boy cub Mowgli.  He nails the sense of child-like wonder and enthusiasm that the original voice actor had and the likeness to his cartoon counterpart is uncanny.  The rest of the voice acting cast is the typical star studded ensemble you would expect of a flagship Disney production.  Bill Murray (Baloo) and Idris Elba (Shere Khan) were stand outs for mine. 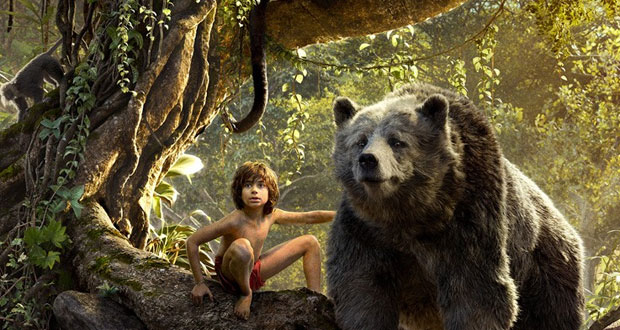 The film is a faithful remake of The Jungle Book story with a few more nods to the original literary source than its animated predecessor.  For an all ages production, it doesn’t shy away from being dark and scary at times, a quality I always appreciated in classic Disney fare (think Bambi and Dumbo).

Perhaps my only qualm with the story is that the friendship between Mowgli and Baloo feels a tad undercooked.  I don’t know if there was a key scene that got the chop in the editing room but the pair of them seem to go from meeting one another for the first time to becoming lifelong friends in the blink of an eye.  Otherwise, the rest of the story beats are satisfying and ring true.  Shere Khan is an ever present danger.  The hypnosis scene with Kaa the anaconda is suitably creepy.  And the showdown with King Louie is really quite something.

Generally speaking, I’d rather see a studio of Disney’s size put its time and energy into developing original film properties instead of investing so heavily in remakes but presumably they’re feeling rather gun-shy after Mars Needs Moms and John Carter tanked so hard at the box office.  So if a decade of remakes lies of the horizon, the best we can hope for is that they have the creative energy and quality of Jon Favreau’s The Jungle Book.

Mowgli embarks on a journey of self discovery with the aid of the panther Bagheera, and the free spirited bear Baloo.

Summary : A visually sumptuous remake that reaches greater heights than expected. Neel Sethi is a standout as a live action Mowgli come to life.