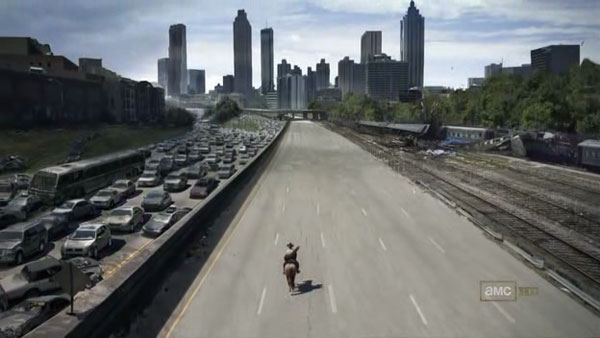 It’s finally here!  Frank Darabont’s pilot of The Walking Dead aired on Sunday night in the States.  I’ve just finished watching it and I am absolutely blown away by what an excellent job Darabont’s production crew have done in bringing this comic book series to the small screen.

As a huge fan of the series, this episode felt like it did everything right to assure me that the series is in safe hands.  Andrew Lincoln absolutely nailed it as Rick Grimes and I’m glad they’ve gone for a cast of unknowns to get the right feel for the show.  We didn’t see a great deal of the rest of the cast just yet but I was happy with the snippets of performances we got from the actors portraying Laurie, Shane and Carl.

I love that they haven’t felt the need to be entirely faithful to the source material and that they’ve had the confidence to develop their own characters and stories already.  The extended tale of the man and his son who move into Rick’s neighbour’s home was well played I thought.  To me it showed that the writers are willing to take the time to tell individual stories of human drama rather than get carried away with overselling the macro level effects of the zombie apocalypse.  Unlike the producers of The Event, you can tell this crew have a modicum of faith in their audience to not switch the channel as soon as the action stops.  The short self-contained story of the man struggling to cope with the loss of wife was touching and unexpected.

I also liked the recurring theme of gender politics in this first episode that explores the difference in behaviour between men and women.  It certainly wasn’t so overtly conveyed in Robert Kirkman’s writing for the original graphic novel.  In the pilot, it’s raised right from the initial exchange between Shane and Rick about women’s habits with switching off lights and then its revisited later on when theres the story of a couple packing their belongings before abandoning their house.  The husband collects essential supplies while the wife focuses on packing photo albums.  Of course, knowing the direction that the series takes with Rick and Laurie, it’ll be interesting to see this theme continue.

There was also some wonderfully creepy shots in this pilot episode.  Although Darabont is most famous for directing The Shawshank Redemption, his recent work on The Mist shows that he has a really good eye for what makes a great horror flick.  Some of my favourite spooky moments in this episode were the hands slithering out of the door marked ‘DON’T OPEN, DEAD INSIDE’ and the short scene with Rick in the dark stairwell with the matches that kept going out.

One thing that made me laugh was an extra wearing a black jacket who keeps appearing in about three different shots.  He reminded me of Ricky Gervais in the Kate Winslet episode of Extras when he keeps shamelessly mugging for the camera.

Lastly, I was stoked to see the scene where Rick enters the city of Atlanta.  It showed me that this series has the budget and production values behind it to effectively convey the large scale sets when it needs to.

I could go on and on about this first episode.  In summary though, I loved it and can’t wait to see more.  I’m pleased to see the positive write ups the show is getting and the great word of mouth its generating.  I will be so bummed if this show gets cancelled prematurely.  Tell your friends to watch it! 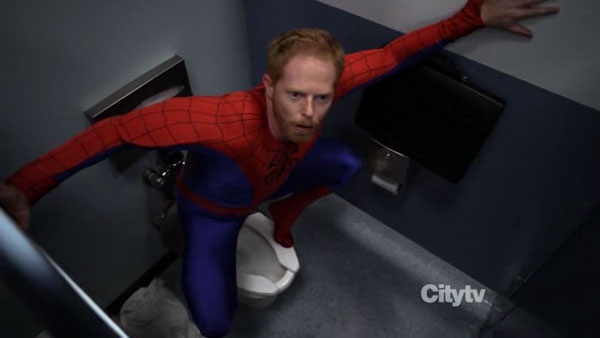 I am still really enjoying the Modern Family show and I think its really hitting its stride in the second season.  The most recent Halloween episode was great, although admittedly, I’m a bit of sucker for themed episodes.  It’s just a very consistent show in delivering on the laughs with a touch of moralizing at the end of each show.  In the Halloween episode, I lost it when Mitchell went to work dressed as Spider-man and had to find a way to discreetly get changed out of his costume.  Just brilliant.  Hopefully this show keeps going.  The combination of clever writing and Sophie Vergara’s hotness can sustain this show for several seasons.

I always love to watch tv shows covering American politics and all its craziness.  While I’ll always have time for The Daily Show, lately I’ve also been enjoying Real Time With Bill Maher.  Maher shamelessly panders to left leaning liberals but thats part of the appeal of the show for me.  He somehow convinces conservative pundits to appear on his show and then he brings up the dodgiest behaviour of Republican candidates and dares them to try and defend it.  It’s a lot more aggressive than The Daily Show in that sense.  Christine O’Donnell and the Tea Party have provided excellent material in recent weeks and the next episode which will take place after the Midterm elections and includes Bill O’Reilly as a guest should be a memorable one.

I’ve been kinda indifferent to the recent episodes about Inception and The Coon.  I’ve stuck with this show longer than most.  Maybe its just about run its course for me too?

Speaking of which, this season of Survivor really isn’t clicking with me.  I’m mostly watching out of habit.  They really drew the short straw when it came to this season’s cast.  There is a serious charisma vaccuum on this show at the moment.  I don’t find myself cheering for a single person to win this season.