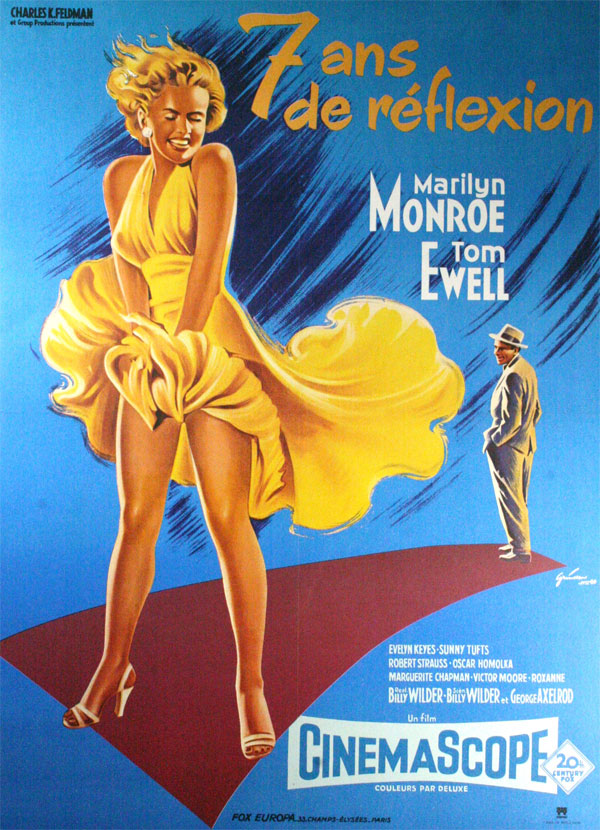 After many successful years making films in the drama and noir genres, director Billy Wilder decided to branch out into comedy.  He wanted to adapt the Broadway production of The Seven Year Itch.  A young Walter Mathau auditioned for the role and made a strong impression.  Wilder wanted him in the role.  His producers overruled him however as they were reluctant to cast Mathau because he was a relative unknown at the time.  Instead, the actor from the stage show Tom Ewell was given the part.  The role of The Girl was given to Marilyn Munroe.  She was a nervous wreck on set.  She constantly showed up late and forgot her lines.  Her marriage to Joe Di Maggio broke down during the film.  At the end of production, Wilder swore never to work with Munroe again.  The whole thing sounded like a mess.  The production ran long and went over budget.

Against all odds, the final product was a film that is fondly remembered as a classic and it features one of the most iconic images in cinematic history – Marilyn Munroe’s skirt billowing up from standing over the subway grating.

Here’s the premise:  There is a centuries old tradition in the peak of summer where it becomes so insufferably hot that all the women and children leave town to head south for a few weeks.  The men stay behind to carry on working and pay for their families.  While the women are away, the men have an opportunity to indulge in their vices.  They smoke more.  They drink more.  They might also entertain the company of the unmarried women who are still around them. 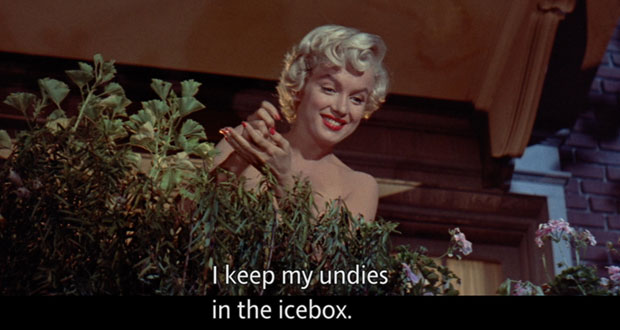 Richard Sherman is one such jobsworth who lives in New York City.  He publishes dime store novels for a living and has been married for seven years.  His wife and son go away to a holiday home by a lake.  Sherman has the best intentions for his summer to himself.  He promises to give up smoking.  He wants to cut down on his drinking.  He even eats at a vegetarian diner on his first night alone.  But all his good intentions fall by the wayside when a beautiful blonde girl moves in to the upstairs apartment.  She is busty, blonde and bubbly.  She is of course, Marilyn Munroe.

By this stage of her career, Munroe was already a star.  And in The Seven Year Itch she’s very much playing a caricature of her earlier roles.  She’s the apple of men’s eyes.  Her naive yet radiant sexuality causes men in this film to turn into that foot-stamping wolf from the Looney Tunes cartoons.  Such is her affect on men that she isn’t even given a name.  She exists as an object of desire.  Ewell’s character describes her as ‘looking like Marilyn Munroe!’ (wink, wink).

Initially, I wasn’t really sure how to take this film.  After seeing her in more substantive roles in Gentlemen Prefer Blondes and Some Like It Hot I found the role of The Girl to be regressive and one dimensional.  The humour in the film was considered incredibly racy at the time and the American film censorship board were a constant presence on the set, making sure there was no funny business.  Today, it all seems rather tame and silly.  It plays like an American version of the Carry On films.  Sherman invites The Girl in for a drink of champagne and he can’t pop the cork.  When he does, it sprays everywhere.  “That’s never happened to me before” says Sherman.  Ho ho!  I see you what you did there, Sherman.

In the end however, I warmed to the film.  It’s not a film about a man having a salacious affair.  It’s not even close.  He’s a lovable loser.  She’s an unwitting flirt.  The Seven Year Itch is as much a film poking fun at societal conventions about marriage and gender roles.  Sherman spends so much time fantasizing about how he romantically wooed all the women in his life but the joke is he never does.  Instead he spends all his time preparing for and covering his tracks for these romantic dalliances that never happen.

If anything, the film turns out to be rather progressive in its views.  Sherman likes to think he’s a ladies man and the head of the household but its clear that its his wife Helen that keeps him organized and in check.  The film never judges or punishes Sherman for being infatuated with The Girl.  She is Marilyn Munroe after all.  And when the moment comes, he never acts on his impulse or put Marilyn in a spot.  He mostly makes an ass out of himself, fusses over what the busybody janitor might say and then finishes the film scampering off to his missus. 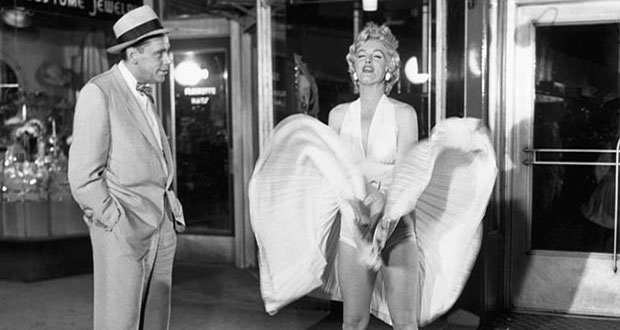 A word or two on the famous skirt scene.  It took hours of shooting and was shot on location in the public with thousands of onlookers.  It caused Di Maggio to fly into a rage and beat Munroe at the end of the day.  Most surprisingly, the shot doesn’t actually appear in the film intact.  In the final cut, you only see a shot of Marilyn’s legs as the skirt begins to billow and then it cuts to another shot from the waist up.  It’s one of those cases of a film being incorrectly remembered in popular culture, like how Vader doesn’t say ‘Luke, I am your father.’

That said, the film shoot spiked massive public interest in the film and full body photos taken from the shoot were used by the studio to promote the film, including a massive larger-than-life poster that was draped on the side of a building in New York.

All said, The Seven Year Itch is a decent comedy that draws most of its humour from poking fun at the social mores of the Fifties and specifically the hapless reaction of everyday men trying to function around Marilyn Munroe.  It’s funny, good natured and not the potential disaster that it could have been when you consider the rocky film shoot and constant studio interference.  It’s probably not my favourite Munroe film but its a cheeky laugh all the same.

Richard Sherman wrestles with his conscience to stay faithful to his wife when Marilyn Munroe moves in next door.

Summary : Despite a difficult journey making it onto the screen, the final product is a light and breezy comedy that features a legendary moment in cinema history. Sort of.