It has been a long time since I last picked up a book and was instantly hooked. But after the reading the very first line of Craig Clevenger’s 2003 debut The Contorionist’s Handbook that was exactly the case. 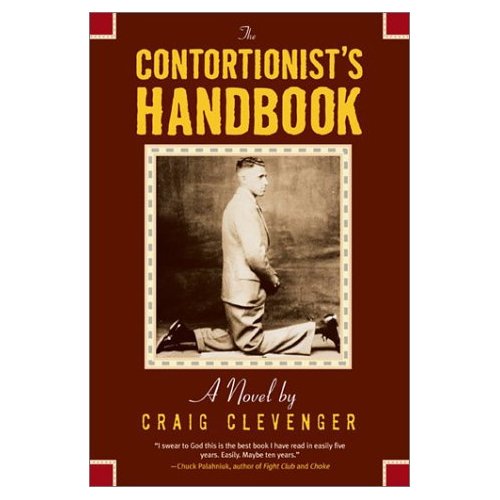 The story introduces you to John Dolan Vincent, a man born with an extra finger on his left hand. Not only does he struggle with this abnormality, but he has led a life blighted by substance abuse and mental illness. In essence the protaganoist is a damaged man.

The novel is narrated by the protagonist as he flicks between the present day and periods of his life in the past. In the present day, Vincent finds himself within a hospital interigation room in California, where he is probed by the “evaluator” who attempts to learn from Vincent’s psyche whether the overdose that has put him in hospital was accidental or an attempt at suicide.

The author shows his cards early on by revealing that this is not Vincent’s first evaluation, but the hospital has no record of Vincent at all – as far as they are aware they are talking to Daniel Fletcher. The novel from here sees a tet-a-tet between Fletcher/Vincent and the evaluator as Vincent attempts to avoid letting slip that after every overdose he takes on a different identity, and therefore avoid being placed into either jail or a mental hospital.

Clevenger uses the psychiatric evaluation as the vehicle allowing him to flick between Vincent’s rough upbringing, where he was constantly ridiculed for his extra digit, and where he constantly found himself on the wrong side of the law.

Texan-born Clevenger’s first novel really hit a note with me. The creation of Vincent as an architype antihero is well developed. Sympathetic to his plight of years of him being plagued by ‘godsplitting’ migranes and constant trouble with the law from a young age, Vincent seems to have simply had enough. Knowing nothing else he falls in love with Keara, who gives his life a meaning and direction that he had never had before.

Creating the atmosphere in the interogation room is definately Clevenger’s strength, creating a tense mood as we are walked through the miticulous thought process of Vincent.

For a novel that would seemlessley transfer into the big screen, I would firmly sink my flag in the opposition’s corner. At only 200pages, with  plot twists and enough will-he-wont-he charachters  that the modern day movie goers are so enticed by, this reallly is a standout book, that can easily be devoured over a summer’s weekend.