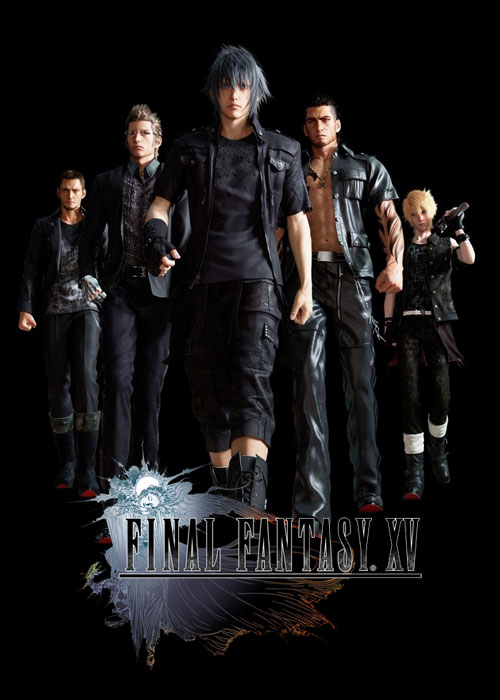 The Final Fantasy series was once the standard bearer for JRPGs and at the height of its popularity during the lifecycle of the original Playstation, the Final Fantasy brand enjoyed multi-million sales worldwide and the type of mindshare occupied today by the likes of Skyrim and The Witcher 3.

But the last ten years have not been kind to Squaresoft and their flagship franchise.

Then, in December 2016, the game finally arrived, ten years after it was first announced.

After all this time, was it worth the wait? 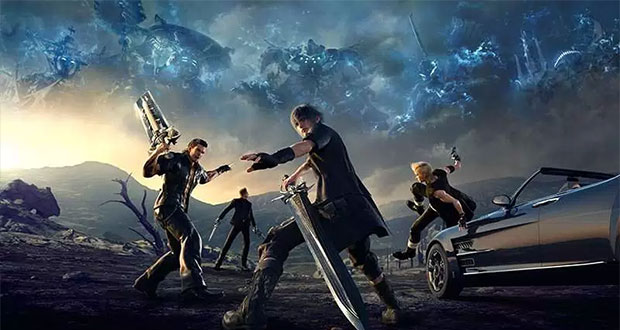 In short, Final Fantasy XV is a mixed bag.  The game has both interesting ideas and disappointing shortcomings but one thing I will say is that at least this is a game that comes out swinging.  I think nothing could’ve been worse than if after all this time, Square Enix released a game that played it safe and felt similar to previous entries in the series (i.e a game that felt like it was designed in 2006).

In this instalment of Final Fantasy, we follow the journey of Prince Noctis, the crown prince of Lucis, who is en route to Altissia with his friends Prompto, Ignis and Gladiolus, so that he may marry Lady Lunafreya of the nation state Accordo.  Along the way, they receive the alarming news that the Niflheim empire has invaded Noctis’ hometown and his father King Regis has been assassinated.

The developers at Square Enix make their intentions known for Final Fantasy XV right from the outset with the splash screen ‘A game for fans and first-timers‘ when the disc boots up.  What does that mean exactly?  Well, for longtime followers of the series, there is plenty of fan service to enjoy.  Series staples such as chocobos, moogles, Cid, Biggs, Wedge and all the trademark elemental spells that have been in every instalment of the series are back in XV.  One of the primary modes of transportation in Final Fantasy XV is the Regalia car.  As Noctis and his gang make pit stops at petrol stations dotted across Accordo, it’s possible to purchase CDs of previous Final Fantasy soundtracks and listen to them via the CD player on your drive.

As for what’s new?  Square Enix hasn’t been shy about shaking up some of the foundations of the series.  Final Fantasy XV is a game that plays wildly different to its predecessors in many ways.  The combat is no longer turn based and plays more like an action RPG.  Having said that, it handles like no action RPG I can think of.  Attack and defence are each assigned to a single button which is simply held down to activate.  The player isn’t required to tap the buttons in any sort of sequence.  You just literally hold down the ‘attack’ or ‘defend’ button.  That’s it.  Oh, and you also have no control over the rest of your party.  Initially, the game feels startling in its simplicity.

There is a gameplay loop that is entirely new to the Final Fantasy series.  The game has a day/night cycle.  Each day, Noctis and his party hit the road and complete tasks.  They could be story related missions, monster hunts, fishing challenges or one of the other myriad of distractions that the game offers.  At the end of the day, the party finds somewhere to sleep.  Depend on whats close by, they may choose to stay in a hotel or camp under the stars.  At this point the player can revisit the highlights of the day thanks to Prompto who takes photos throughout the duration of the game and shares them on his smartphone.  Lastly, Ignis is the team’s designated chef and he will often serve a meal to the party which can buff their stats for the next day.  This food is presented in lovingly rendered artwork made by Square Enix’s development team.  It looks so good that I wouldn’t be surprised if at least one of the years in development was spent exclusively on creating digital servings of lamb cutlets, curry, ramen and croquettes. 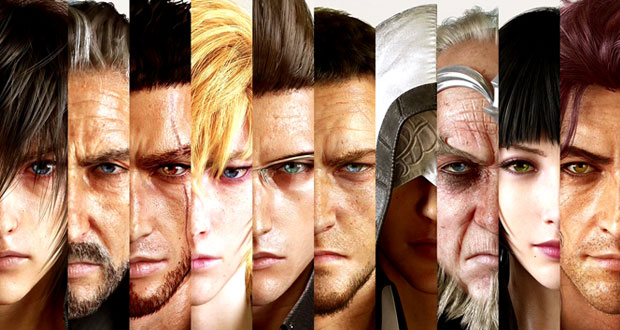 And that gameplay loop?  Its fresh, unique and I loved it.  There is a leisurely pace to Final Fantasy XV that initially feels outrageous but I actually really warmed too.  Much of that cross country navigation is spent on the road.  The playable character Noctis is generally not encouraged to drive and nor is the journey especially interactive.  Ignis takes the wheel and the rest of the gang just chill in the Regalia.  Sometimes they chat.  Sometimes they read a book or have a nap.  You might want to browse through the CD collection and listen to some of your favourite tunes from past Final Fantasy games.  Take your time.  Sometimes, it can be up to ten minutes (real time) before you arrive at your destination.  Check your phone or make a sandwich if you want.

Once you arrive at your destination, there’s usually some monsters to dispatch, some fish to catch and maybe some loot to be uncovered.  Then it’s back on the road, rinse and repeat until nightfall.

I’ve thought a bit about why I liked this style of gameplay so much and I think it’s because it feels like a holiday.  Noctis and his friends and generally pretty cheerful company to keep.  They like seeing the sights, trying new food and chatting about anything and everything.  The game captures the feeling of being on a road trip with your mates in a way that no other game has done before.

Final Fantasy XV also has a very clear sense of identity that becomes apparent very early on.  This may be the first ever RPG about millennials.  Noctis and his friends all carry their smart phones with them.  They enjoy posing for selfies and photographing their food.  They talk in a distinctively millennial fashion.  Their relationships with one another and how they open up to each other is much different from Final Fantasy games of the past.

I appreciate that a ‘millennial Final Fantasy’ might sound like kryptonite to some prospective players but I actually enjoyed it.  The sense of camaraderie that the four main characters have in this game is one of its strongest assets.

Having said that, one of the weakest aspects of Final Fantasy XV – and this is kind of a big deal in an RPG – is its story.  It’s paradoxically hard to follow and yet tissue thin in substance.  I have read that there is plenty of additional context and meaning provided to the story for anyone who sits through the feature length film Kingsglaive: Final Fantasy but I think thats a pretty lousy way to communicate the story to your audience.  I suspect anyone who doesn’t watch the film will struggle to develop any kind of connection with King Regis or Lady Lunafreya, both of whom are pivotal to the story.  King Regis and Lady Lunafreya are in the game for a disappointingly brief period of time and their character’s feel very undercooked compared to the four main characters.

Still, the Final Fantasy Road Trip experience would still have been enough for me to give this game a wholehearted recommendation but unfortunately, things really take a turn for the worse around Chapter Seven.  At that point, the game abruptly strips away a lot of the game’s best assets.  Access to the open world is taken away.  All of a sudden, Noctis is forced to strike out on his own for an extended period of time.  Most of this back half of Final Fantasy XV is spent in the corridors of buildings fighting identical enemies and looking for key cards.  It’s bland, devoid of creativity and more than a little tedious.

I wish there was more of the open road.  And more environments to explore.  Not unlike Final Fantasy XIII which also had a generous amount of time in development, one of the most puzzling aspects of Final Fantasy XV is just how bereft of content it feels like it has.  Fans of Final Fantasy VII will remember there were many different continents to explore, each with their own cities and different terrain.  By the end of the adventure you had climbed mountains, travelled through forests and crossed vast deserts.  In Final Fantasy XV there are effectively only two major cities and the rest of the terrain is mostly grassy plains dotted with tiny petrol stations and roadside diners.

It makes me wonder why Square Enix have struggled since the Playstation 2 days to create content in a timely fashion for their most recent games.  Comparatively smaller development studios such as CD Projekt in Poland have created enourmous worlds to explore in their Witcher series and they are doing it with a fraction of the budget, staff and time.  Is it mismanagement at Square?  Is it a talent drain?  What is going on here?

Overall, Final Fantasy XV is a likeable game but it is not without some major shortcomings and a real lack of content in the second half of the story.  It has great ideas but what seems crazy for a game ten years in development is that it also feels like they ran out of time.  For instance, there are items in the shops that you can buy that cure status ailments such as paralysis, confusion and sleep.  The only problem is, I didn’t encounter a single enemy in the game that actually inflicted these types of attacks on me.  There are two chapters near the end of the game where the only instruction is to ‘explore the train’ while it travels from point A to point B.  I completed a good amount of side missions (over fifty by my count) and yet by the time the end credits rolled, I had only clocked in slightly over 30 hours of gameplay.  This feels like one of the shortest and slightest Final Fantasy games I’ve played and thats despite the fact that long periods of the game are spent riding in non-interactive car trips.

There are great ideas at the heart of Final Fantasy XV.  Concepts that modernize the JRPG and can make Final Fantasy feel fresh and relevant for today’s audiences.  But it’s a pity that the grind to release these games in a timely fashion seems so difficult for Square Enix.  Until they works out how to produce their games in a more efficient and timely fashion, I can’t ever see them attaining the heights that they once reached twenty years ago.

Here’s hoping the next Final Fantasy game I write about isn’t released in 2024.

Prince Noctis and his three friends travel to the city of Altissia where Noctis is to be wed. On the journey, they learn that a rival empire has attacked the homeland and King Regis has been slain.

Summary : Final Fantasy XV is a game filled with interesting ideas but feels incomplete. The game dramatically runs out of steam in the second act.