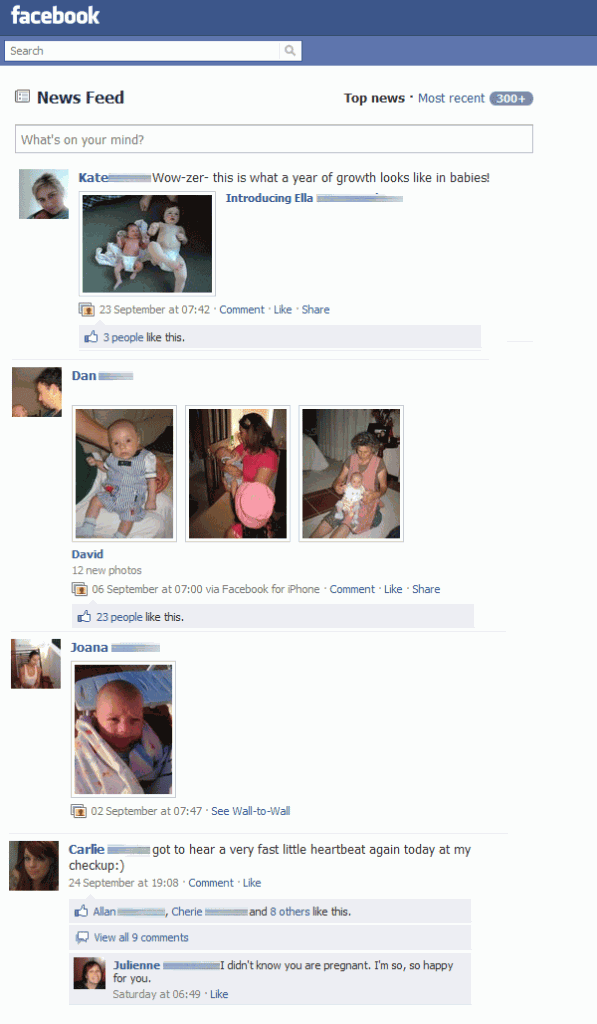 I’m sure it’s going to be me and Jen doing the same thing one day but until such a time comes, I’d love to know if there is a way to filter babies out of Facebook.  What I find is that baby photos and baby-related status updates always attract the most number of comments and ‘likes’ therefore they end up clogging up the Top News feed for days and sometimes weeks at a time.  I don’t even mind baby photo updates.  I just don’t need to see the same ones all the time.

That said, I’ve actually had a pretty steep decline in Facebook usage over the past few weeks.  Sure, it’s still a brilliant tool for getting in touch with people and I enjoyed the novelty of rediscovering people I hadn’t spoken to in years.  Having said that, part of the reason you didn’t speak to these people in years is that you’re not actually all that close.  So while its been cool to add Pramod from my highschool chemistry class on Facebook, we don’t actually have a whole lot to talk about.

Instead, I’m finding Twitter has served my social networking needs a lot better in recent times.  If you build up a decent list of people that you follow then you’re getting a continual stream of content that is personalized to your interests.  The experience is even better if you’re browsing using the official Twitter app on iPhone/iPad or Flipboard which make it extremely handy to view images and follow links.  Is anyone else finding that they’re gravitating more from Facebook to Twitter?

This blog entry is also an excuse to talk about The Social Network which is getting some surprisingly strong reviews for being ‘a movie about Facebook’.  100% freshness rating on Rotten Tomatoes?  Comparisons with The Godfather and Citizen Kane?  What is going on here?  While I’m still a wee bit skeptical, the film does feature Jesse Eisenberg who was excellent in Zombieland, is directed by David Fincher and written by Aaron Sorkin so I’m more than ready to give it a go.

Previous: TV Show Round Up: Survivor, The Wire, Modern Family, Glee, Party Down and The Event
Next: Alan Wake