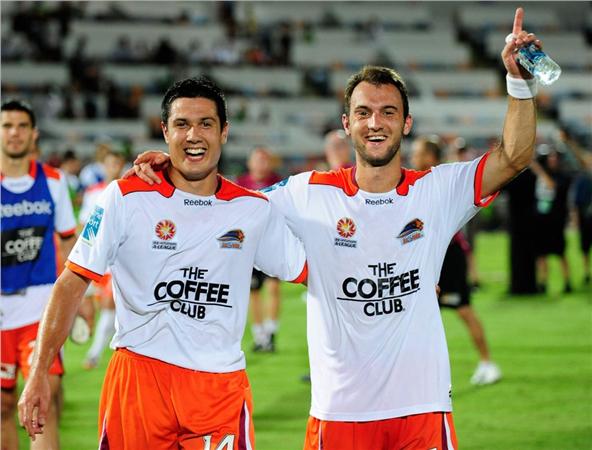 Round 22 went Brisbane Roar’s way before their match even started.  Second placed Adelaide United somehow threw away a 1-0 advantage late in the game to eventually lose 2-1 to the unlikely Melbourne Heart at Hindmarsh Stadium further cementing the club’s reputation as a bunch of choke artists that can’t handle the heat in the business end of the season.  That considerably eased the pressure on the Roar who were visiting the Fury for their fourth road game in a row.

It didn’t take long for the Roar to open their account.  Kosta Barbarouses cut through the defence after just seven minutes before rounding the keeper and coolly slotting home the finish for his eighth of the season.  During the rest of the second half, the Fury piled on the attack but had nothing to show for their troubles.

The Roar once again gained the ascendancy in the second half and the pressure eventually told when Barbarouses found himself one on one with the keeper who he nutmegged to bring his personal tally to nine and to put the Roar 2-0 up.  The Fury had no answers after that and at the final whistle, the Roar found themselves ten points clear at the top of the table having played seventeen consecutive games without defeat.

So the Roar won their game and Adelaide United lost theirs.  What about the third and fouth placed sides?  Gold Coast United were scheduled to play the Central Coast Mariners but the game was called off due to poor conditions after twenty minutes, with the gaming having to be rescheduled at a later date in an already packed fixture list.  The Mariners in particular are already down one less game than planned after a match with Newcastle was called off earlier in the season and has yet to be played.

All the pressure remains on the rest of the league while Brisbane look to have one hand already on the A-League Premiership and one foot into qualification for the AFC Champions League.  What could possibly go wrong from here? 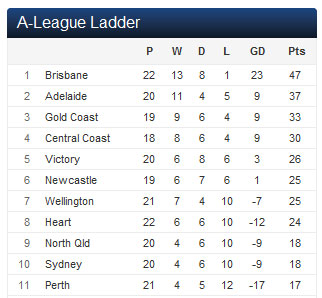