Malt whisky and my appreciation for it has been a relatively recent development in my life.  When I was younger, I used to enjoy the occasional dram here and there but I didn’t pay it much notice and if anything, I found the strong taste a bit off-putting.  When I would drink socially, I would stick with beer.

My brother drank whisky long before I did and I recall he had a pretty impressive collection when I visited him a few years ago.  My dad Don also has a taste for whisky and I have some fond memories of catching up with him on my holidays and we’d have ourselves a couple of glasses of Glenfiddich for a nightcap after mum had gone to bed.  Sometimes if we got on a roll, Don would fall asleep where he was sitting, the whisky tumbler perfectly balanced on his belly, never spilling.

It was actually when I received a bottle of 10 year old Talisker as a ‘thank you’ gift from an old boss, Darren, that actually sparked my passion for it.  This would’ve been a couple of years ago now.  I had had whisky before but something about that bottle really struck a chord with me.  I enjoyed the taste of it so much and I wanted to learn more about this stuff.  How was it made?  What did other whiskies taste like?  What was the perfect dram?  To this day, Talisker remains one of my favourite single malts.

Since that bottle two years ago, I’ve been on a tasting tour of whisky, trying to get my hands on the stuff whenever the opportunity and finances allow for it.  I’ve started down a road of discovery that I’m sure I’ll never finish. 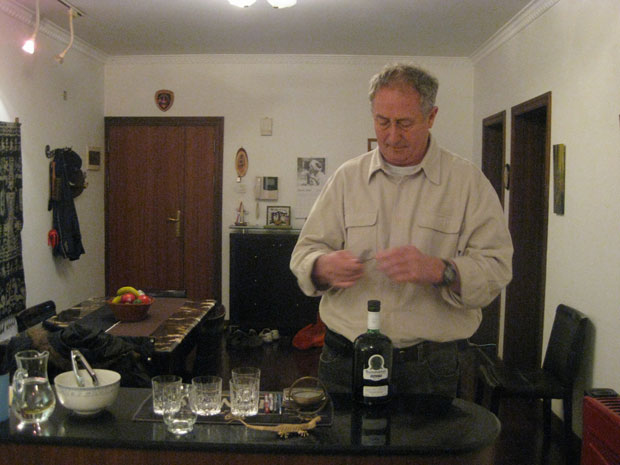 Hanging out with my old man

So whats the purpose of this blog entry?

Well, if I’m going to go on a journey trying out different malt whiskies, it felt like a missed opportunity not to keep a record of it on this website.  It’s the only way I can do these things.  Any time I’ve tried to keep a journal whilst travelling overseas or maintain a diary of films I’ve seen in a year I always end up losing it or stopping after a while.  TFW is the only way to go.

Although I’m primarily motivated out of self-interest to keep a reference guide of the whiskies I’ve tried, a lofty secondary goal is that hopefully some of these entries will pique the curiousity of the reader and will encourage some of you to give malt whisky a try too.

What you’ll be reading in my whisky blog are the tasting notes of different bottles from the perspective of a complete newbie.  One with dulled senses and a B minus English grade in GCSE at that.  So hopefully these blogs will remain accessible, easy to read and as I said, hopefully may motivate some of you to track down a bottle or two yourselves.

To help get everyone started, I thought I would write this first entry as a general introductory guide to whisky, rather than a write up of a specific bottle.

How is malt whisky made?
The distillation process for malt whisky is pretty straight forward.  You take barley, soak it in pure water, let it germinate, then dry it in a kiln, mash it with hot water, ferment it with sugars and yeast so it turns into beer, vaporize it so that it becomes a spirit, then leave it in a cask until it becomes whisky.  A good write up with diagrams can be found here: http://www.maltmadness.com/guide-04.html

Why drink malt whisky?
One of the most appealing things about whisky for me is its incredible versatility of the drink.  Even though the process for whisky distillation is relatively straight forward, there is an incredible range of flavours, scents and colours that can be achieved by making alterations at different stages of the process.  The addition of peat during the kiln firing can give the whisky a smoky flavour like a Laphroaig.  In the Oban distillery, they have a slightly longer fermentation period which gives its whisky a trademark flavour.  The longer you leave the whisky in the cask and depending on the type of cask you use can have a significant impact on the colour of the whisky.  If you develop an interest in whisky, there is a near endless variety of different types that you can explore.

What is the difference between single malt and blended whisky?
Single Malt whisky by definition is distilled at one location and is made from one type of malted grain.  It must also be aged for a minimum of three years to legally be called whisky.  You would normally drink a single malt either neat (as is) or with a tiny bit of water.  Some people also like to have ice with it which pretentious whisky snobs get up in arms about but there’s nothing wrong with it really.  Personally, I like to have it neat.

Blended whisky is exactly what it sounds like.  It is a blend of different single malts mixed together through a process called ‘vatting’.  90% of the whisky produced in Scotland goes towards blended whisky as it can be made quicker, cheaper and sells in a higher quantities.  Famous blended whisky brands include Johnny Walker, Grant’s, Chivas Regal etc.  Typically, you will have blended whisky for quick and easy consumption so people are more inclined to mix it with coke and shit.  That said, there are premium blended malts such as Johnny Walker Blue Label and you would drink that neat.

Is it whisky or whiskey?
Whisky is used for Scottish distillations.  The spelling ‘whiskey’ has American and Irish origins.

What do I need to get set up for drinking whisky?
Get some tumblers!  Whisky is a wonderful social drink so make sure you get at least four.  They come in different shapes and sizes.  Just go with what suits you. 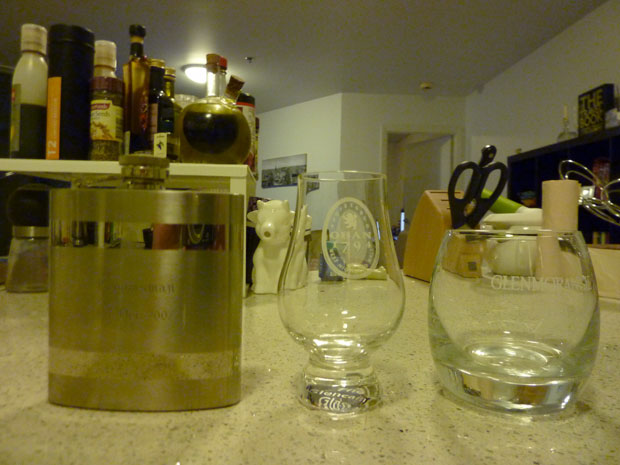 Different drinking vessels are appropriate depending on the occasion. Are you drinking with some friends as an apertif or are you attending your children’s concert recital?

I mentioned before that some people frown on drinking malt whisky with ice as it supposedly messes up the taste somehow.  A rather nifty whisky accessory you can get is whisky stones which you store in your freezer.  That way, they have the desired cooling effect but without any additional shenanigans.  You can usually buy a bag of these magic rocks for around $100-$200. 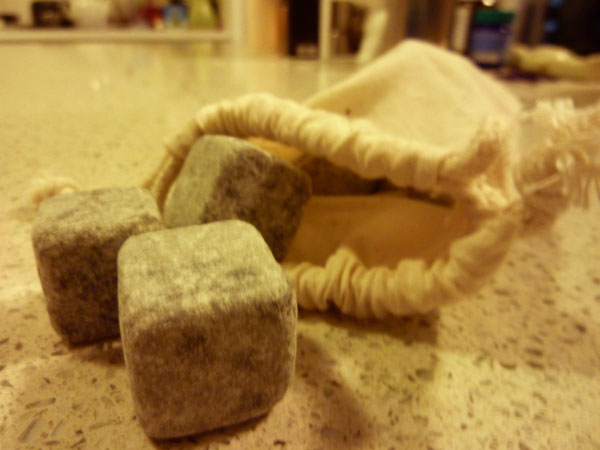 For a decent whisky compendium, I recommend Michael Jackson’s Malt Whisky Companion.  They released a 6th edition print in 2010.  Michael Jackson was a renowned journalist who wrote about and critiqued whisky which is surely one of the best jobs in the world.  This guide has his rating on over 300 different whiskies.  They are alphabetised, given consise tasting notes and scored out of 100 based on their quality.

Unfortunately, Jackson passed away in 2007.  That said, the updated 6th Edition print does have new reviews written by other contributors but they keep his style and format. 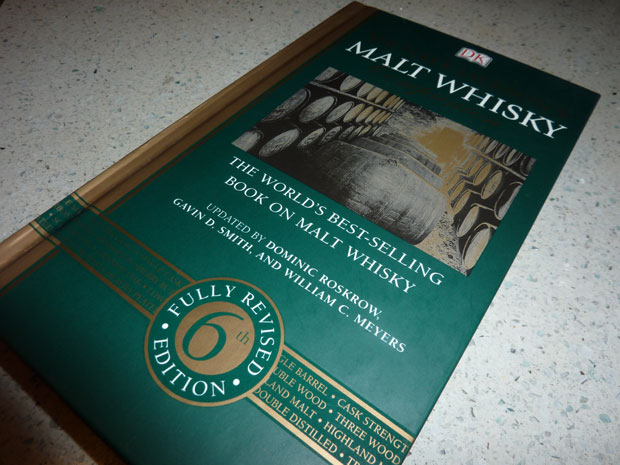 If you’re a cool dude like me you’ll also get a decanter.  Decanters are a great way of storing your drink in a fancy bottle and it also makes you look like a major pimp when you serve it at your next whisky social. 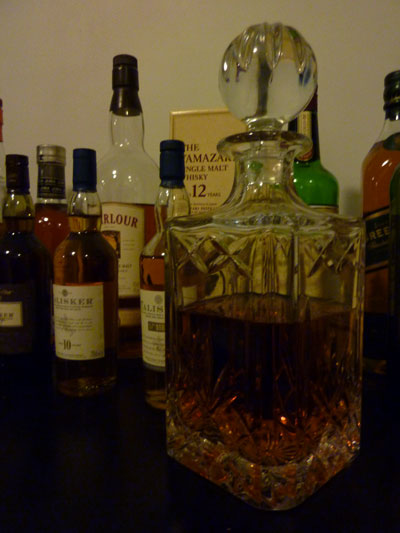 How will I rate the whisky in The FAT Website Whisky Companion?
I haven’t decided yet.  Jackon uses a 100 point rating scale which seems overly complicated.  Can you really score one drink 78 out of 100 and another one 79?  I think I will either forgo a ratings system entirely or maybe go the whole hog and rank them in scores out of a million.  I haven’t decided. 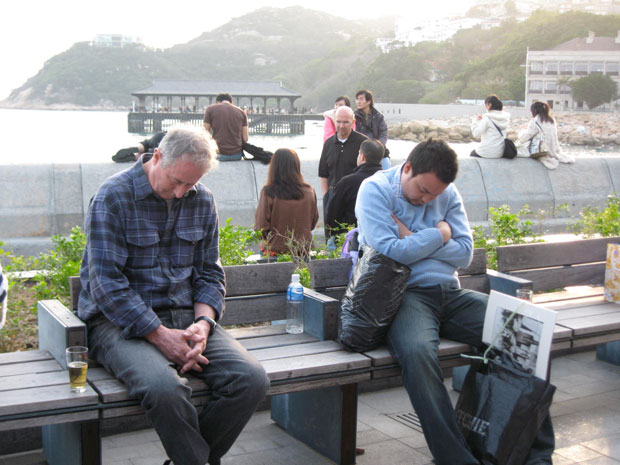 The older I get, the more I become like my dad

Previous: Youtube Friday: Floating in the Flood
Next: ISB Videos