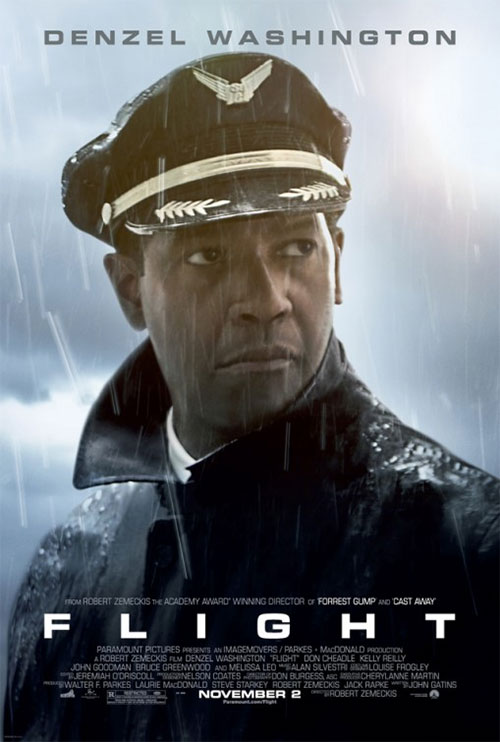 Whip Whitaker is an airline pilot with years of experience, a cool head under pressure and a chronic drug and alcohol addiction.  In the opening scene of Flight, we see him having sex with a crew member, snorting a line of coke for breakfast and then heading off to the airport to pilot a 747.  He swigs some vodka on the way.

The flight is destined to be a troubled one.  After steering the plane through a turbulent take off that is rattled by stormy weather, the engine malfunctions and Whitaker is forced to make an emergency landing.  When the plane begin to nose dive, he steadies it in spectacular fashion by flying the plane upside down.  It’s a feat so audacious that you wonder if its based on a true story.  I googled it.  It’s not.

As Whitaker navigates the plane towards a paddock to make an emergency landing, he clips the steeple of a church in a literal symbol of the salvation he so badly needs from his demons.  When the planes crashes to a halt, over a hundred lives are saved and just six are lost.  He is hailed in the press as a hero but as an investigation is launched into what went wrong on the flight, Whitaker knows it is only a matter of time before his addiction and condition during the flight are uncovered.

Flight is the long awaited return to live action films for Robert Zemeckis, the man who gave us Forrest Gump and Back to the Future but has spent the past decade doing children’s animated films.  And with the opening scene of Flight, its clear he’s definitely back in adult film territory, perhaps gratuitously so.

As for the film’s central conceit – should we forgive a man’s transgressions if he ultimately does good and saves peoples lives? – it is a pretty cut and dry proposition in my eyes.  Of course Whitaker deserves to be punished.  He is flying a plane while drunk and high!  The fact that he saves the plane in such acrobatic fashion does nothing to mask his gross misconduct. 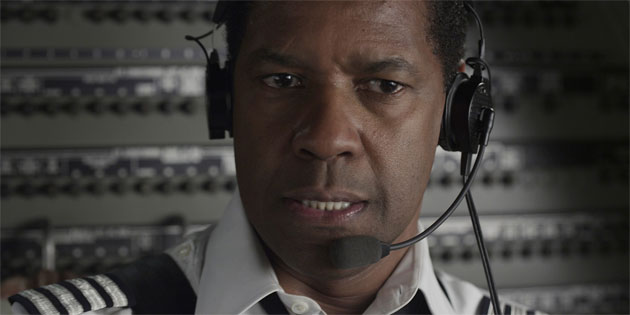 Denzel Washington’s performance as Whip presents him as unquestionably damaged and selfish.  When Whip realizes the heat is on and he risks possible jail time, he lawyers up and visits various crew members to try and shore up their support or hush them up.

The film makes a ham-fisted effort at showing Whip’s compassionate side, when he takes in an implausibly good-looking homeless heroin addict named Nicole, and lets her stay in his home.  This whole subplot I found to be ridiculous and defied credulity.  But since the rest of Whip’s associates are enablers and corporate suits, I guess Nicole serves to act as his conscience.

Speaking of the supporting cast, one of the strangest things I’ve seen in a while is John Goodman’s performance in this film.  His delivery as a wise-cracking, fast-talking drug dealer is completely at odds with the tone of the film and seems like it would be more appropriate for Pineapple Express or Dude Where’s My Car?  It’s like he walked off the set of a different film or someone played a prank and told him that Flight was a whacky stoner comedy.

Flight is a weird film.  Denzel’s performance as Whip Whitaker is excellent but there is little substance to Flight as a whole.  He’s a terrible person who desperately needs to accept responsibility and seek sobriety.  He doesn’t truly consider a moment of clarity until the eleventh hour.  That’s more or less it.  The film has few moments of levity and the supporting cast don’t really amount to much.

The film has a strong and persistent religious subtext.  From the plane crashing through the steeple to the hospital bed prayer scene to the recurrent 12 Step programs that appear throughout the film, Flight seems to suggest that Christ is the salvation for Whip Whitaker’s alcoholism and drug addiction.  I don’t really know what to make of that.  If the film offered any greater insight into Whitaker’s spiritual side I think I’d be more engaged with the notion.  But I didn’t really get that sense at all and the whole thing feels half-baked.  For those seeking a superior film about spiritual salvation, go to the cinema screening next door and buy a ticket to Life of Pi.

Nobody gets higher than Denzel

Summary : It's convoluted, clunky and didn't work for me at all.

5 Second Review: The Taking Of Pelham 123