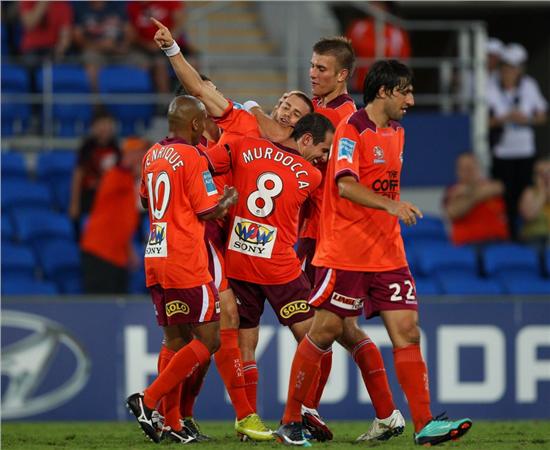 On a two week break that was imposed by the recent floods in Queensland, the Brisbane Roar got their season back underway at Skilled Park in the Gold Coast on Australia Day.  The Roar’s usual homeground, Suncorp Stadium, will still be in recovery mode until possibly the final game of the season.

It was my first trip to Skilled Park.  My initial thought was that it’s a pretty strange venue.  Situated right next to the Robina train station, the stadium shares the land with a paddock that has some cows chewing cud and that’s about it.  A real estate billboard has an artist’s impression envisioning land development in the future that includes a shopping centre, some cafes and bars and a nightclub.  Right now, its not even begun any kind of development.  It’s just this stadium in the middle of nowhere with some cows.

Skilled Park itself is in miserable condition.  The surface is an eyesore with bumpy patches of turf where the grass is cut unevenly and what appears to be sand traps that wouldn’t be out of place at the Victoria Park golf course.  I don’t know who looks after the playing surface at Skilled Park but it looks like a job done by Farmer Joe when he finishes milking the cows outside.

Anyway, both sides came into this game with plenty to play for.  The Roar need six points from four games to wrap up the season and a win or a draw would see them tie the all-time Australian football league record from 1987 of twenty two games without a loss.  For their part, the Wellington Phoenix currently lie 7th in the table, one point adrift of the teams destined for finals football.

I’ve blogged before about Phoenix coach Ricky Herbert and his incredible talent for grinding out drawn matches.  The two teams met before in Round 13 and since then, the strategy against Brisbane Roar hasn’t changed:  PARK THE F’ING BUS.

From the opening whistle the Phoenix sat deep in their own half and kept eleven men behind the ball.  They never pushed their players forward for more than a short spell and were content to play counter attacking football.  For their part, the Roar looked pretty average.  Still missing their midfield general Matt McKay to international duties at the Asian Cup, they seemed to lack direction in front of goal.  Despite sustained pressure, it took nearly half an hour before the first shot on goal landed.

For eighty minutes it was a turgid and pedestrian affair.

When the game entered its final ten minutes, young substitute James Meyer came onto to the park.  Meyer made a name for himself when he scored the third and equalizing goal in the 3-3 draw with the Central Coast Mariners in the Roar’s last game.  Once again, he didn’t take long to make an impact.

Latching onto a loose ball outside the penalty area, he fired a speculative shot at goal.  It caught a deflection of the leg of a Phoenix defender and dribbled into the goal as a wrong-footed Phoenix keeper Danny Vukovic could only watch.  James Meyer had struck again.

Then, on the eighty eighth minute, Thomas Broich broke away down the wing and steamrolled into the penalty box.  He fired off a shot which rattled the crossbar and who else was there but James Meyer once more to tap in the rebound to take his tally in the A-League to three goals from two games.

I still can’t quite tell what to make of Meyer.  Is he a new Sergio Van Djk in the making or did he just get really lucky twice?  Regardless, that’s two games in a row now that he has bailed the Roar out of trouble.  The 22-game undefeated streak has now been tied andthe Roar only need one more win to wrap up the season. 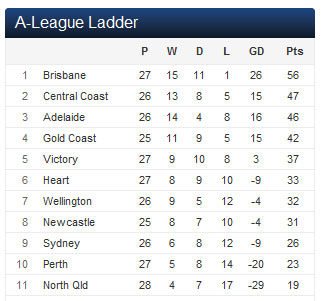