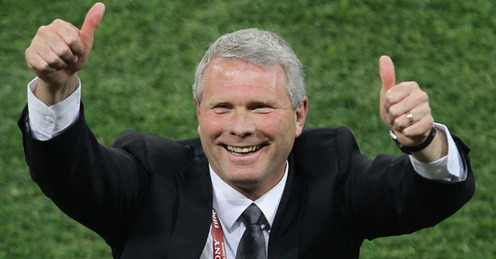 Ricky Herbert is a man who never loses.

Ricky will always make sure that he dumps a girlfriend before they get a chance to dump him.  He always back the horse with the shortest odds and he buys homogenized milk.  It’s this cautious approach to life that has made Ricky a world-renowned football manager.  His conservative, ultra-defensive style of play has seen him successfully draw matches against opponents ranging from Marlboro Boys College First XI to the Italian national team when they were the defending champions at the World Cup this year.

It’s also lead to the best post-WW2 home record in Australasian football.  His Wellington Phoenix side have not lost a game at Westpac Stadium since October 2008, a streak of 24 games without a defeat.  I don’t know the exact figure but he probably had as many as two victories in that streak.

So when the Brisbane Roar headed to the Cake Tin to play the Nix in a midweek encounter, even the most optimistic Roar supporter would be happy to settle for a draw.  You can’t beat Ricky at his own game.  Not on his home turf.

Fortunately, the Roar had something working in their favour: the All Whites striker and former Phoenix player Kosta Barbarouses.  Ever since he left the Phoenix for the Roar, its become apparent that he has some kind of clause in his contract that states he must always score a goal against his former club.  This time he only took 3 minutes.

Aside from a brief hiccup when Tim Brown equalized with a freak goal from the edge of the box, the Roar continued to show their dominating form.  Crisp passing and clever ball retention were the order of the day.  German import Thomas Broich and Massimo Murdocca reliably orchestrated the free flowing football in the middle of the park whilst frontman Reinaldo reliably blazed the ball over the bar time and again.

On the stroke of halftime, Broich hit a scorching shot at goal which took a deflection off a Phoenix defender and ended up in the back of the net.  Once the second half begun, Ricky Herbert was caught out of his comfort zone.  His side couldn’t just stack eleven men behind the ball and play counter attacking football.  He had to make some substitutions and add some firepower up front.  Unfortunately, none of the Phoenix players know how to play an attacking style of football and simply fell apart.  Murdocca added a third goal in the 76th minute for the Roar and then Mitch Nicholls added the proverbial cherry on top with a fourth goal in injury time.

After the full time whistle, Ricky Herbert spontaneously combusted and the Roar left New Zealand as the first team to come away with 3 points from Westpac Stadium in over 24 months.  They now sit atop the A-League table having charged to an eight game unbeaten streak.  They don’t have long to rest.  This Saturday, they have a home game against the second placed Adelaide United, who they have never beaten at home in the history of the competition. 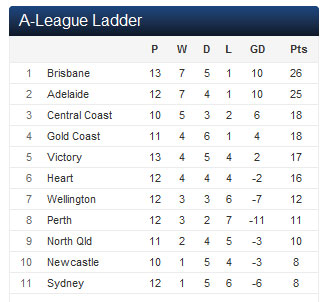