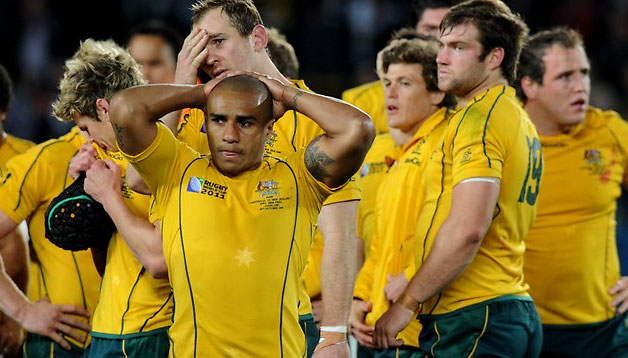 So in the end, a spluttering, underwhelming Wallabies campaign was brought to a close against an almighty All Blacks side that destroyed them right from the outset when Quade Cooper’s first touch of the ball was to boot it into touch on the full.  The scoreline heavily flattered the Wallabies as the All Blacks squandered approximately 5,000 points in missed penalty kicks.  They now cruise into the final against a French side that are out of form, lost two games already and are apparently fighting with one another because the players defied the manager’s request not to go out drinking after the semi final against Wales.

There’s still the matter of the third place playoff before the Wallabies can perform a full debrief on their campaign of what went right and wrong.  Like it or not, it appears that Robbie Deans is here to stay for now.  His contract has already been signed for an additional two years.  There will be questions around how to improve the forward pack, whether Horwill was the right choice for captain, what happened to Quade Cooper and why the backline failed to deliver a single try in the big games against Ireland, South Africa and the All Blacks.

Surely the eventual transition of the Wallabies coaching mantle will pass to Queensland Reds super coach Ewen McKenzie who found significant success in the past with the NSW Warratahs and who also lead the Queensland Reds (who make up about eight of the starting fifteen in the Wallabies) to a Super 15 championship this year.  McKenzie found significant success in beating the New Zealand and South African sides in Super 15 and got the absolute best out of Quade Cooper who appears to be wiltering under the tutelage of Robbie Deans.  Unfortunately, it appears that time won’t be for another couple of years yet.

For now, I think it can be recognized that James Horwill has done great work at the captain of the Wallabies.  He came in with extremely short notice but has lead admirably both with his performance and with his relationship with the players and fans.

Unfortunately for Quade Cooper, he had an awful campaign and failed to deliver on his potential.  It remains to be seen whether Robbie Deans is capable of translating his Super 15 form into international rugby.

For New Zealand they storm into a finals rematch from 1987 against France who they beat the last time they won a World Cup twenty four years ago.  They will surely win this game.  They have been a dominating force in this tournament and haven’t really had a single competitive game this tournament with all six matches being lopsided encounters where they decimated their opponents.  I expect the final to be no different.  While it doesn’t make for a close contest (few All Blacks games are), the win will be a long time coming.  In a week’s time, the mantle of World Cup Choke Artists will finally be shed.

I am an idiot and made a bet with a Kiwi in the office. Whoever’s team lost the semi final had to post a picture of themselves wearing the jersey of the opposing side.  So yesterday I had to put this attrocity on my Facebook account. 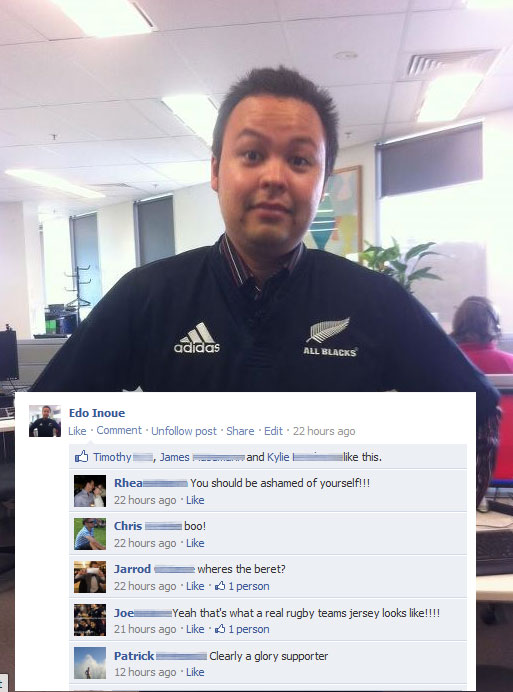 There I am copping abuse for being a glory seeker from someone who supports Manchester United and Chelsea.