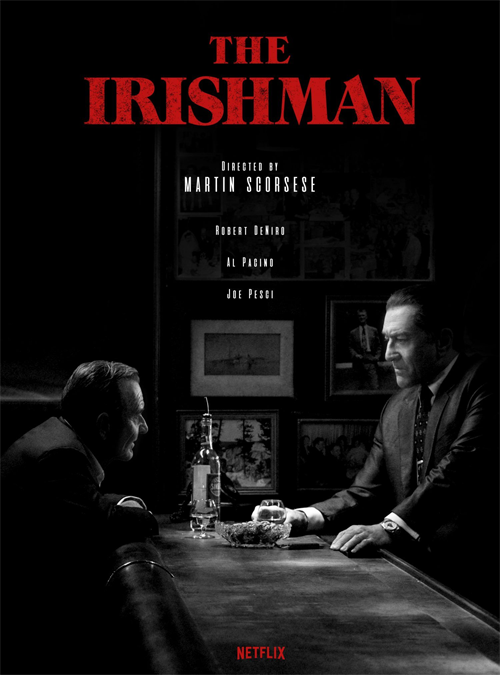 Martin Scorcese has something to say.

The legendary director, now 77, has assembled some of the most famous and beloved actors from his past – Robert De Niro, Al Pacino, a returning Joe Pesci who came out of retirement – to tell a sprawling, epic tale of the life and times of Frank Sheeran, a World War II veteran who toils without reward in his job as a delivery truck driver, until a meeting with mob boss Russel Bufalino propels him into a life of crime.

De Niro plays Sheeran, first as an ailing octogenarian in a nursing home recalling his life, and then (thanks to some de-aging special effects) at various stages of his life as he is taken under Bufalino’s wing and becomes an incredibly proficient hit-man and an increasingly high ranking member of the mafia.  Sheeran’s prowess eventually catches the attention of Jimmy Hoffa (Pacino), the notoriously corrupt leader of the Teamsters union, who develops a long standing friendship with him.

Hoffa is the head of the Teamsters but he has high profile enemies both inside and outside of the organisation.  Attorney General Bobby Kennedy starts a “Get Hoffa” squad that dedicates their pursuits to bringing him down.  They eventually succeed – successfully convicting him of jury tampering – and putting Hoffa away for seven years.  Meanwhile within the Teamsters, the ambitious Anthony “Tony Pro” Provezano has designs on becoming the new leader.

When Hoffa is released from prison, he expects to automatically resume his position as head of the Teamsters.  When asked by Sheeran to take a more measured approach, he baulks at the suggestion and explains he has dirt on everyone and didn’t rat anyone out when he was on the inside so his ascension to the top should be assured.  This attitude is viewed as disrespectful by the other Teamster leaders and crime families.  Eventually the order comes down from Bufalino to Sheeran that a hit is it go down on his friend Hoffa.  The closing chapter of the film – by far the most powerful and enduring – casts a lens on the consequences of those actions. 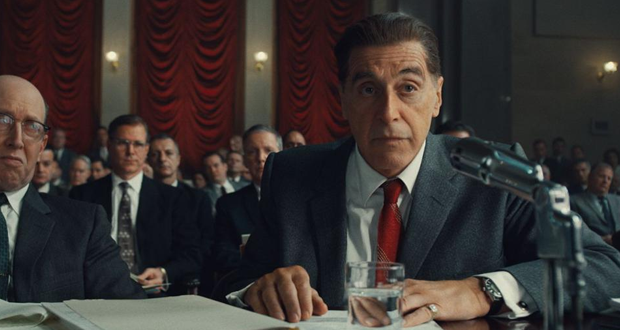 The Irishman is a farewell letter from a legendary generation of actors and a director who made their names in the Seventies.  De Niro, Pacino and Pesci are a pleasure to watch, slipping into old gangster roles like a well worn glove.  De Niro and Pacino have stayed in the public eye over the years but its both a thrill and a shock to see Pesci after decades in retirement return and play such a soft-spoken part after making his name playing such a bombastic human tornado in Casino and Goodfellas.

This is classic Scorcese fare.  The Irishman is a film that explores the complicated and often contradictory nature of crime families and how the people within them interact with one another.  Sheeran and Hoffa have a dry wit and a genuine bond with one another but are prepared to kill at a moments notice when the bloody business calls for it.  These men are career criminals and contract killers but their lives are seemingly steeped in religious traditions.  Part of what makes Sheeran so compelling (and confounding) is that we are never really sure who he really is and which emotions and actions represent his true nature.

The Irishman is the last time these performers will act together and they all know it.  There is a strong sense of self-reflection and introspection in The Irishman.  In the final act, Sheeran is told he has outlived everyone, all his friends are dead, his family has abandoned him and all thats left for him to do is to measure his own coffin.  As Frank reflects on his legacy in the twilight of his years, the spectre of a 77 year old Martin Scorcese looms large.  The Irishman doesn’t pass any specific judgement on Frank Sheeran or those around him.  Instead of guiding us to any particular answers, it is left to the audience to decide what they make of him.

The Irishman is a handsomely made and thoroughly enjoyable crime drama.  Scorcese is working in very familiar territory but he has lost none of his finesse or craftsmanship.  This is a production that he has clearly poured every last ounce of his energy and passion into.  If this is to be one of his final films, he is going out on a high.

A mob hitman recalls his possible involvement with the slaying of Jimmy Hoffa.

Summary : A sprawling gangster epic with some of the best performances from De Niro and Pacino in decades.

Previous: The Nightingale
Next: Knives Out