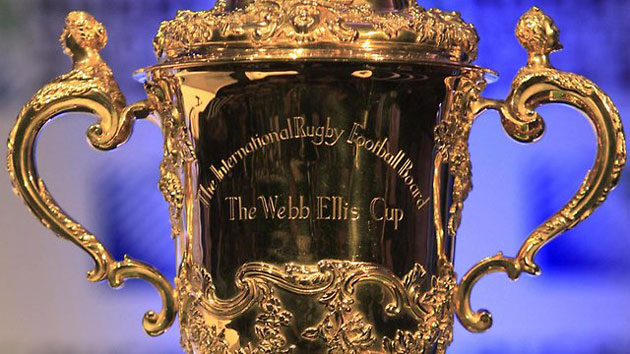 The Rugby World Cup is the official IRB competition that crowns the best rugby nation in the world.  Hosted every four years, it is the biggest sporting event to be held in 2011 and is kind of a big deal.  This year’s competition will be hosted by New Zealand.  This will be the sixth iteration of the tournament which has seen four different winners – New Zealand, England, Australia (2) and South Africa (2).  The reigning champions are South Africa.

In one of international sports most remarkable hoodoos, New Zealand are widely regarded as the greatest rugby playing nation but have only won the tournament once, beating France to be crowned the first ever Rugby World Cup champions in 1987.  They have since entered virtually every tournament since as favourites (except maybe ’91) and have choked in spectacular fashion.  They enter this tournament having not laid a hand on the Web Ellis trophy in 24 years.  Perhaps the finest serving of hubris coming from the ’99 installment where they even shot a tv series called Touchdown about their road to the finals which was hosted by Kiwi model Rachel Hunter.  The All Blacks were knocked out that year in the semis by the French.

WHO IS WILLIAM WEB ELLIS?

The trophy is named after a pupil who attend Rugby School and is said to have first invented the game by picking up a football during a game and running off with it.  A dick move at the time but now years later he is celebrated and remembered as a visionary.

THE ALL BLACK PRAYER

“Our players who art in Black, Rugby be thy game. When full-time come, thy will be done, in 2011 as it was in ’87. Give us each game our daily victory, and forgive us our previous shortcomings…as we forgive those who coached in ’07. And lead us not to knock-out round failure, but deliver us from World Cup drought. In the name of McCaw, Carter and the Holy Webb Ellis. AMEN!”

Want to see if you can hold your own against FatWeb rugby gurus such as myself and Pat?  Join the Official TFW Sportal Competition here:

WHO IS BETTER – DAN CARTER OR QUADE COOPER? 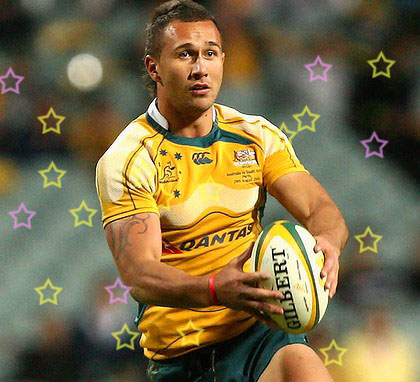 The correct answer is Quade Cooper.  Part of the fun of this competition will be seeing Quade outperform Carter consistently whilst teary eyed Kiwis complain that Carter has ‘better technique.’  Kiwis really hate Cooper.

Like the FIFA World Cup, the Rugby World Cup begins with a round robin group stage – 20 nations divide into five groups – and the top two advance from each to a knockout stage.

Here’s a breakdown of the groups.

GROUP A – All Blacks, Canada, Japan, Tonga and France

If you want to get absolutely wasted, play a drinking game where you take a shot for every point scored in the New Zealand vs Japan game.  Their previous encounter in the 1995 World Cup long held the record for the biggest cumulative score of any profressional ruby game – the All Blacks won 145 – 17.

France have long been the kryptonite for the All Blacks in World Cups having knocked them out twice so the Blacks will be stoked to be playing them in the group stage.  France have not selected Chabal in their squad this year so he won’t be around to re-arrange Ali Williams’ face anymore.

If we’re lucky, during the opening game of the tournament, we might get to see Tonga and New Zealand perform duelling hakas.  It happened once before when the Tongans interjected during the AB’s haka by doing their own version and it was Lord of the Rings level of awesome.

Japan has a couple of cool Samoan dudes in their team that are pretty good.

I don’t know anything about Canadian rugby.

Prediction: All Blacks (1) and France (2) to advance

Apparently, no one wants to be mates with Argentina.  They’ve played a measley seventeen internationals since making the semi-finals of the last World Cup.  Thats an average of just four internationals a year.  Poor dudes

Scotland and England being drawn in the same group will be a lot of fun and Scotland have occasionally pulled off the upset during Six Nations competitions in the last decade.  I think it can happen again.

I vaguely recall Romania being in a World Cup in the Nineties.  I would fear the gypsy-strength of their forward pack but otherwise they should be pushovers.

I don’t know anything about Georgia.  Didn’t the Big Boss Man come from there?

Prediction: England (1) and Scotland (2) to advance

Look how cool the logos are for America and Russia.  A polar bear and a bald eagle with the ball tucked under their paws/wings!  So badass.

The Wallabies of course will cruise through this group stage.  Italy are still rubbish and Ireland are badly out of form having lost their last four games.  The only concern for the Wallabies is that maybe the group stage will be a little too easy and not provide them with enough momentum leading into the knockout stages of the tournament.

The Cold War Showdown will be a fun little game.

Prediction: Australia (1) and Ireland (2) to advance

Every decent World Cup competition worth its salt has a Group of Death and here it is.  Wales, Fiji and Samoa are all of a similar playing level and South Africa have played like total crap in the build up to finals.

Fiji’s rugby logo is a picture of Radike Samo

Prediction: Who the hell knows?  Let’s go with the Springboks and Samoa 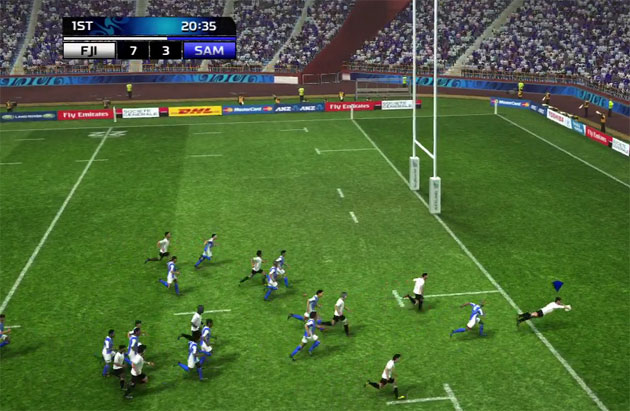