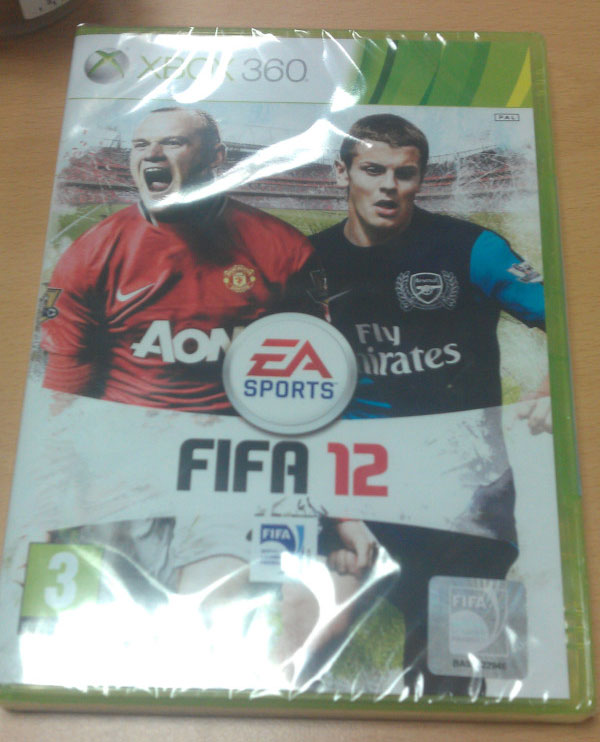 FIFA 12: The cover of FIFA 12 continues to document Wayne Rooney’s receeding hairline as it has done so for the past five years

It’s that time of year again.  Both Konami and EA Sports have released playable demos of their yearly iterations of Pro Evo Soccer and FIFA.  We all know the story: for a decade Konami ruled the roost with the best football video game in town until EA spectacularly stole the crown back with FIFA 10.  2010 saw a FatWeb football community divided.  Edo went with FIFA on Xbox 360.  Pat sold his Xbox 360 and got a PS3 instead and opted to stick with Pro Evo.  Mike was given a review copy of Steven Gerrard’s Total Football.

How do these games fare in 2011?  I downloaded both PES and FIFA to find out.

The FIFA 12 demo starts of with a tutorial on…defending.  An interesting choice to say the least.  They’ve certainly expanded on the defensive options and teaching players the new shouldering, player tracking and tackling options is key to selling the game’s updated physics engine.  I thought it felt pretty good and does exactly what the marketing tagline suggests –  there is now a far greater feeling of physicality to this year’s FIFA.  The controls on attack are as solid as ever, the player likeness is reasonable and the atmosphere of the stadiums feel slightly improved over last year.  FIFA are certainly onto a good thing with their current engine and I think all that anyone expected were slight tweaks.  Importantly, it retains the A-League license.  There’s some other leagues as well for those that are interested.  Oh, and Andy Gray got kicked off the game after 15 years on commentary for that whole sexist-comments-about-the-female-ref thing earlier this year.  I don’t really miss him at all.

I’m still not sure about the new UI they introduced last year which bolts most of the tactical information under the player and employs a bright rainbow coloured arc to show the power of the kick.  It gives the game an arcadey feel which is weird since FIFA was always the ‘pinball’ football game and Pro Evo was supposed to the purists game.  The graphics are excellent and much better than the early iterations of PES that we got which barely looked improved over the PS2/Xbox days.  I think my main gripe with the game is that to me, it still feels like you’re running the players on tracks that run in eight directions (up, down, left, right, diagionals) whereas FIFA feels more organic and with proper 360 degree movement.  I also find the attacking tricks in PES quite difficult to pull off whereas they come second nature in FIFA.  Maybe thats just me?

As always, its a pretty crowded end of year release schedule so I don’t know when I’ll be purchasing my annual football game but right now, my money still stays with FIFA.  More satisfying to play, an untouchable depth with its licenses and better overall presentation.

Which side will you choose?