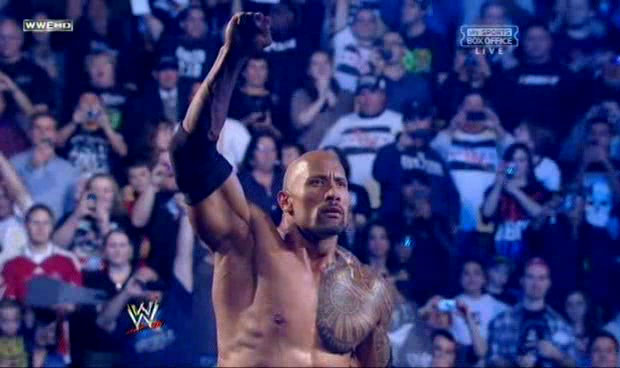 Although the WWE airs roughly five million pay per view shows a year, there is still the Big Four (Wrestlemania, Survivor Series, Summer Slam, Royal Rumble) that can usually be counted on to deliver a solid show.  This year’s Survivor Series had one major selling point:  the in-ring return of The Rock after a seven year absense.  He was to feature in a tag team match with John Cena against a couple of random guys that no one really cares about.  Here’s my recap of the show!

Dolph Ziggler (c) vs John Morrison
United States Championship
My understanding is that next Monday, John Morrison’s contract with the company expires and he is going to be shown the door.  Morrison was once an up and coming star in the promotion who had a rock star entrance and flashy moves.  Unfortunately for Morrison, his girlfriend Melina slept around with a bunch of guys in the lockerroom and he took her back which is an affront to Vince McMahon and his view on how men should ‘look after’ their partners.  Morrison has had a very quick fall from grace ever since.  As early as January this year he had been treated like a big star in the promotion but in the last few months he had been jobbed out relentlessly, losing many matches in mere minutes.  To his credit, it never seemed to disengage Morrison too much.  He took it on the chin and kept working hard.  This match was no different and he had a decent back and forth match with Dolph Ziggler.  Ziggler himself came out looking pretty strong.  His selling style and look is very reminiscent of Mr Perfect Curt Hennig as his confidence in the ring has only improved over time.  Unfortunately, he’s been a victim of the shitty haphazard booking of the company and has already had a short, forgettable title reign as World Champion.  Hopefully he can work his way back into a main event spot when he’s actually ready and have a more significant run in the future.

Beth Phoenix (c) vs Eve Torres
WWE Divas Championship
The WWE divas division is a real mixed bag these days.  There’s actually a decent stable of talented wrestlers in this division but it is also diluted by an absolute glut of identical looking models who have no charisma and would barely pass muster as valets.  Beth Phoenix, the women’s champ, is currently playing a heel who wants the women’s division to not be filled with ‘barbie doll’ models who don’t care about wrestling and wants the focus to be turned towards more athletic and capable women who can actually wrestle.  Just to clarify, she is the heel for verbalising this intent.  The only way this angle could’ve worked for me is if Beth was actually a talentless model herself but that’s far from the case.  As a result, her feuds have been met with a confused and mixed reaction from the audience who are naturally inclined to cheer for her athleticism but are trying to be told by the commentators that she’s out of line for suggesting that women should be decent wrestlers.  This again is one of those really awkward instances of Vince’s insane and outdated views on women creeping into a wrestling show in the 21st Century where the audience has left him behind and don’t share his views

On a positive note, this match wasn’t too bad.  Phoenix is a good worker and got a decent match out of Eve Torres who held her own.  The match finished with a spectacular top rope fallaway slam by Phoenix to retain the title.

Team Orton (Randy Orton, Sheamus, Sin Cara, Welshtista, Kofi Kingston) vs Team Barrett (Wade Barrett, Dolph Ziggler, Cody Rhodes, Jack Swagger, Hunico)
Traditional Survivor Series Match
This match was a pretty good showcase for what a solid midcard the WWE has nowadays.  Barrett, Sheamus, Kofi, Rhodes and Ziggler are all very capable performers and this was a pretty entertaining traditional Survivor Series match to show off their talents.  As is often the case with the WWE, there is generally an impatience with the audience to see some of these guys performing in the main event far earlier than when the company is prepared to do so.  Even with the retirement of just about every major star from the last era, the company is still yet to wholeheartedly get behind pushing some of these younger guys.  With the imminent retirement of The Undertaker and Triple H however, you would imagine that surely the big break for a lot of these guys is just around the corner.  You get the feeling that this could be one of those matches that you look back on in five years and observe how so many of the performers went on to bigger and better things in the main event.  Or at least I hope so.  The only downer in this match was a seemingly inocuous looking plancha from Sin Cara somehow ended up with him getting an injury that puts him on the shelf for nine months.  Poor dude.

Mark Henry (c) vs Big Show
World Heavyweight Championship
Yeeeaaaaah, I kinda ended up fast forwarding this one.  Nothing against either wrestler but these guys are really best served wrestling smaller, more nimble opponents.  Two big fat slow guys in the ring together end up having a big fat slow match.  This one went on for a bit and then ended when one guy kicked the other in the balls, drawing the disqualification.  I’m kinda surprised both guys are still wrestling to be honest.  Particularly Mark Henry.  Who would’ve guessed that ten years ago?

Alberto Del Rio (c) vs CM Punk
WWE Championship
This match ruled.  It went for a decent length of time (20-25 minutes?), it had a hot crowd that was well and truly behind Punk and it was a decent straight up wrestling match.  In the end, Punk claimed his fourth world title, submitting Del Rio with the anaconda vice and celebrated by crowd surfing with the rapturous New York city crowd.  This was definitely a feel good moment and just desserts for CM Punk who was going nowhere this year and was even considered to be leaving the company in the middle of the year.  However he turned it all around with an infamous ‘worked shoot’ promo where he basically torched the company’s creative direction and basically pointed out how rubbish everything was.  Inexplicably, this won Punk the backing and support of the company who noticed how strongly the crowd reacted.  Since then, Punk had two excellent matches with John Cena, came out winning both but then inexplicably got railroaded into a feud with…Kevin Nash and Triple H?  Fortunately, Nash wasn’t really ring ready so that feud fell over and he was quickly re-inserted into the title picture and justly rewarded with his victory.  Hopefully, this will be the end of a summer that saw the title get hot potatoed around five or six wrestlers in the span of a couple of months.  I would love to Punk get a decent reign here that will hopefully last till at least Wrestlemania.  I really believe he is the guy that can turn around the fortunes of this company.  I think they might finally be seeing it to.

John Cena and The Rock vs R-Truth and The Miz
This seemed like a pretty strange match to set up for The Rock’s return.  No one in their right mind would believe that Miz and R-Truth are credible opponents.  It’s almost like having a glorified squash match main eventing one of the biggest shows of the year.  And it was more or less that.  It must be noted however that The Rock looked excellent when he was in the ring.  His moves were crisp, his timing excellent and there seemed to be no sign of ring rust.  It bodes well for his big main event match at Wrestlemania.

As for Cena, his performance and crowd reaction from the New Yorkers in Madison Square Garden pretty much summarized the company’s problems in the last six years.  As the WWE’s biggest babyface, he came out to a chorus of boos.  The Rock had been treating him like a chump for weeks leading up to this match and instead of coming across as a sympathetic face, the crowd just shat all over him.  His response, to shrug at the camera and give off a goofy smile.  It’s a shame since he seems like a nice guy and is clearly dedicated to what he does.  It’s just that his character is stale as hell, he has been the number one guy in the company in a run at the top that has gone on longer than The Rock, Steve Austin or Hulk Hogan during his 1980’s Hulkamania run.  That’s a pretty long goddamn time.  He is absolutely dying for a new creative direction and you feel that sending him out there to play second fiddle to The Rock and looking like a smiling dumbass who just cops it on the chin is doing him no favours.  Hopefully…hopefully, a heel turn at Wrestlemania against The Rock is on the cards.  This guy needs a fresh direction badly and its shit seeing him going out and getting booed relentlessly week after week.

Winner:  John Cena and The Rock

This was a pretty awesome show from top to bottom.  The WWE still has pretty major challenges creatively but this show, alongside the Money In The Bank PPV, was a rare highlight and you occasionally get a rare glimpse into the possibility that the WWE would consider changing their current direction.  It’s great seeing The Rock back, Punk is clearly primed for a decent run as a headliner for the company and there was plenty of decent matches up and down this card.  It’s good to think we’re only a couple of months away from my favourite PPV of the year – Royal Rumble – and the start of the Road to Wrestlemania.