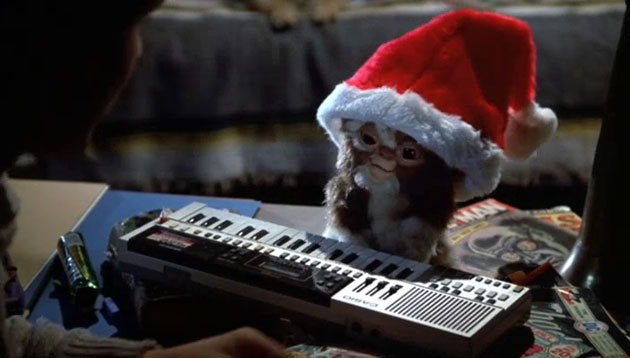 Gremlins is a most excellent Christmas movie made by Steven Spielberg just a couple of years after he scored big with E.T.  It was made during the height of Hollywood’s interest in big budget animatronic creature features during the Eighties.

The film has a fairytale like quality to it.  The characters are all very well known storytelling archetypes.  There’s the young unassuming hero, the cute girl, the inventor dad, the boorish and lazy sheriff, the mysterious Chinaman who sells a store full of weird and magical goods…you get the idea.  It turns out this mysterious Chinese shop owner has in his possession a creature named a Mogwai.Although friendly and approachable to humans, there are three rules of utmost importance that people must abide by when owning one as a pet.  You must keep it away from bright lights, you can never give it water and you must never feed it after midnight.  I like how these rules are established from the onset for the audience to keep in mind in the duration of the film.  A lot of the fun and anticipation in the film is seeing them be broken, one by one.

Gremlins feels like a part of a Hollywood genre that was pumpin’ in the Eighties and barely exists today.  It is a horror comedy for children.  After a fairly structured first half to the film where we establish the mogwai rules and meet the characters, Spielberg just goes to town with the second hour which is just chaotic.  There is barely any order to the events that unfold.  We just witness an assortment of scenes in which the gremlins terrorize the citizens in the neighbourhood using classic horror movie setups – jumping out from a darkened background, jumping out from the foreground, grabbing a human’s leg from under a table, running people over with a tractor, you name it.

Although muddled and all over the place, the film oozes charm (amongst other secretions).  The mogwai in its original state is adorable.  The mogwai in gremlin form is memorable.  By the time they converge upon a theatre at the end of the film to watch Snow White and the Seven Dwarves, it feels like Gremlins has turned into a muppet movie.  Horror comedies are a tricky proposition to pull off for adults, let alone creating one that is suitable for children but Spielberg has done it.

Part of me is surprised this film hasn’t had a stronger lasting legacy.  But I guess ultimately, it just means that its avoided the dreaded fate of having an unwanted remake.  I have no idea how appealling this film is to someone who didn’t watch it in their childhood but for me, its still a terrifically entertaining and distinctively Eighties Christmas film.

Gremlins is a most excellent Christmas movie made by Steven Spielberg just a couple of years after he scored big with E.T.  It was made during the height of Hollywood’s interest in big budget animatronic creature features during the Eighties. The film has a fairytale like quality to it.  The characters are all very well …

Summary : A Christmas classic for any child of the Eighties. They don't really make 'em like this anymore.

Previous: Christmas Eve Youtube: The Year In Review
Next: A Very Inoue Christmas 2011