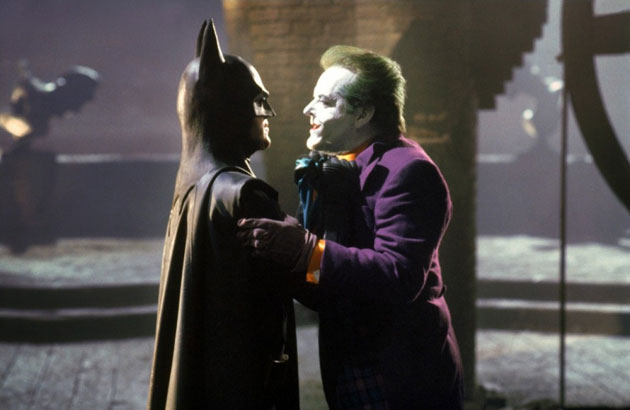 Batman is a crime-fighting comic book super hero created by Bob Kane that has captured the imagination of readers and has been a part of popular culture for over seventy years.  While the Dark Knight has a long and illustrious history in print, he also has a pretty solid legacy in film also.

Tim Burton’s Batman, released in 1989, was not the first movie adaptation of the Caped Crusader but it is definitely the film that kickstarted the contemporary Batman movie legacy.  Audiences love Batman so much that despite heavy saturation (seven films in two decades) and one stinker at the box office (Batman & Robin), the appetite to watch Batman films remains so high that The Dark Knight grossed half a billion dollars at the box office.

It’s interesting to go back and revisit Tim Burton’s original Batman film.  I hadn’t seen it myself in a long time.  In fact, I think I saw the film before I had ever read a Batman comic.  The film is still held in pretty high regard and both Michael Keaton and Jack Nicholson are widely praised for their respective performances as Bruce Wayne and The Joker.

The film begins with a quick recap of Batman’s origin.  A young Bruce Wayne witnesses his parents get gunned down by a low-rent criminal in front of a movie theatre.  Flash forward to present day and a mobster by the name of Jack Napier is set up by his boss for having an affair with his girlfriend.  Instead of being killed though, Batman intervenes and during the scuffle, Napier falls into a vat of acidic green goo.  He survives but requires plastic surgery on his face.  The surgery is botched and Napier is scarred with a permant smile on his face.  He rechristens himself as the Joker and becomes Gotham City’s new crimelord.  Batman, Gotham’s dedicated crime fighter, investigates the Joker and discovers that he was the very same guy that killed his parents all those years ago.  What a coincidence!  The two face one another and realize they are each responsible for the other’s transformation.  They fight and good triumphs over evil. The end.

I’ve gotta be honest and say I didn’t really care for this film.  I don’t think its aged particularly well at all and I think that most of the adoration for the film today is clouded in nostalgia.  A lot of my lack of enjoyment of the film stems from Burton’s treatment of the source material.  Clearly Burton has an idea in his head of what a comic book adaptation should be and in his mind, its something thats largely targeted at children or young teenagers.  I had forgotten how basic and rudimentary the dialogue in this film was.  The script is just a notch about the Adam West tv show but I think adults jumped on board mostly because of the gothic window dressing which in 1989 was fresh and appealling.

What bugs me is that Burton really takes liberties with the character of The Joker.  In the comics, The Joker is a physical manifestion of anarchy and chaos.  We never learn his real name, identity or origin because its not important.  He is not interested in money or power.  He’s obsessed with Batman and is a highly intelligent psychopath.  In the film, he’s given a name.  He’s given a crummy and unnecessary origin story.  His makeup is removable and he is basically a Dick Tracey style villain.  By comparison, I’m a much bigger fan of Heath Ledger’s portrayal.

The film also has some pretty dreary choreography when it comes to Batman’s fighting and use of gadgetry.  It can be easy to forget how far modern day fight choreography has come as Hollywood embraced ideas and concepts from Hong Kong martial arts and more stylized auteurs like The Wachowski Brothers.  In Batman, its stunt school basics 101 as Michael Keaton rather stiffly throws one straight arm punch after another at henchman who stand in a line waiting to be hit.  He shows as much range in movement as the action figures.  Only the scenes with the Bat Mobile have some sort of finesse about them that holds up today.

Aside from Tim Burton’s gothic set design, Batman is a pretty bland film to watch today.  Keaton has a good presense as both Bruce Wayne and Batman but he doesn’t have much to work with when it comes to the script.  Jack Nicholson of course looks like he’s having the time of his life.  For me, I can respect the importance this film has and we wouldn’t have the Christopher Nolan trilogy without this succeeding first but man…it’s just not aged well at all.

Previous: TV Show Round Up: Survivor One World Finale, Veep
Next: Jiro Dreams of Sushi