Phoenix Wright: Justice For All 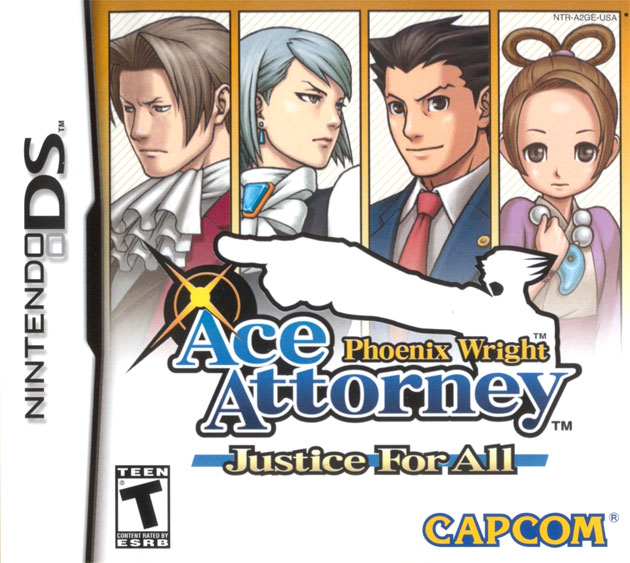 Playing Phoenix Wright: Justice For All is like revisiting an old friend.  The gameplay is almost a carbon copy of the original, with all its charm, quirks and flaws.  Without giving too much away, a lot of old favourites from the original game also re-appear in this follow up to Ace Attorney.

Delving further into the spiritual elements associated with the Fey women from the first game, the only real gameplay addition is the introduction of psylocks, a new ability granted to Phoenix that allows him to tell whether people are lying to him.  I felt it was a pretty goofy addition to the series but similarly to the first game’s narrative device where they would reveal the murderer to the player before Phoenix would find out, the game still succeeds in being charming and fun to play in spite of this.

Justice For All could probably be considered a weaker game that the original.  There are four cases, one less than the original, and the second case in particular is a bit weak.  It’s no coincidence that this is the case that is most heavily steeped in the Fey family mysticism.

The quality of the game lifts considerably with the third and fourth cases though.  The third case centres around a homicide at a circus and introduces a host of new characters including a campy illusionist who looks like Ziggy Stardust, a nervous ventriloquist who is seemingly controlled by his puppet and a lolita-esque circus trainer who, despite being sixteen, is lusted after by all of the male characters.

The fourth case is both the climax and creative peak for Justice For All.  This has the reputation for being one of the finest cases in the franchise and with good reason.  Although its a pretty loose connection, Phoenix Wright shares a lot of the same qualities I liked about Agatha Christie novels I read when I was a kid.  After playing through several cases, a pattern becomes clear.  There is always a ridiculous cast of characters and the defendant is always innocent.  Just like Christie would set a similar set of rules with the Hercule Poirot books, occasionally she would fuck with you and throw out a twist such as every suspect being involved with the murder, the policeman being the murderer or the murder actually turns out to be a suicide.  And in the fourth case of Justice For All, it becomes apparent midway through the story that there is a very good chance your client, the defendant, who is always innocent in the previous cases, may actually be the murderer.  It’s a terrific twist thats so effective because its two games and nine cases in the making.

Ultimately, Justice For All is not likely to be remembered as the best in the series by any stretch of the imagination but it is still worth playing for fans of the original.  It starts slow but the second half of the game is worth your while.  I could write another few hundred words about the bizarre pop culture references and how the game’s creators appear to have a loathing for brain-dead party girls from tabloid culture but I’ll save that for another day.

Phoenix Wright: Justice For All

Platform:  Nintendo DS Developer:  Capcom Publisher:  Capcom *contains spoilers* Playing Phoenix Wright: Justice For All is like revisiting an old friend.  The gameplay is almost a carbon copy of the original, with all its charm, quirks and flaws.  Without giving too much away, a lot of old favourites from the original game also re-appear in …

Summary : There's a couple of duff cases in this sequel to Ace Attorney but the final case is an absolute cracker. Overall, Justice For All retains the quirky charms of Ace Attorney.